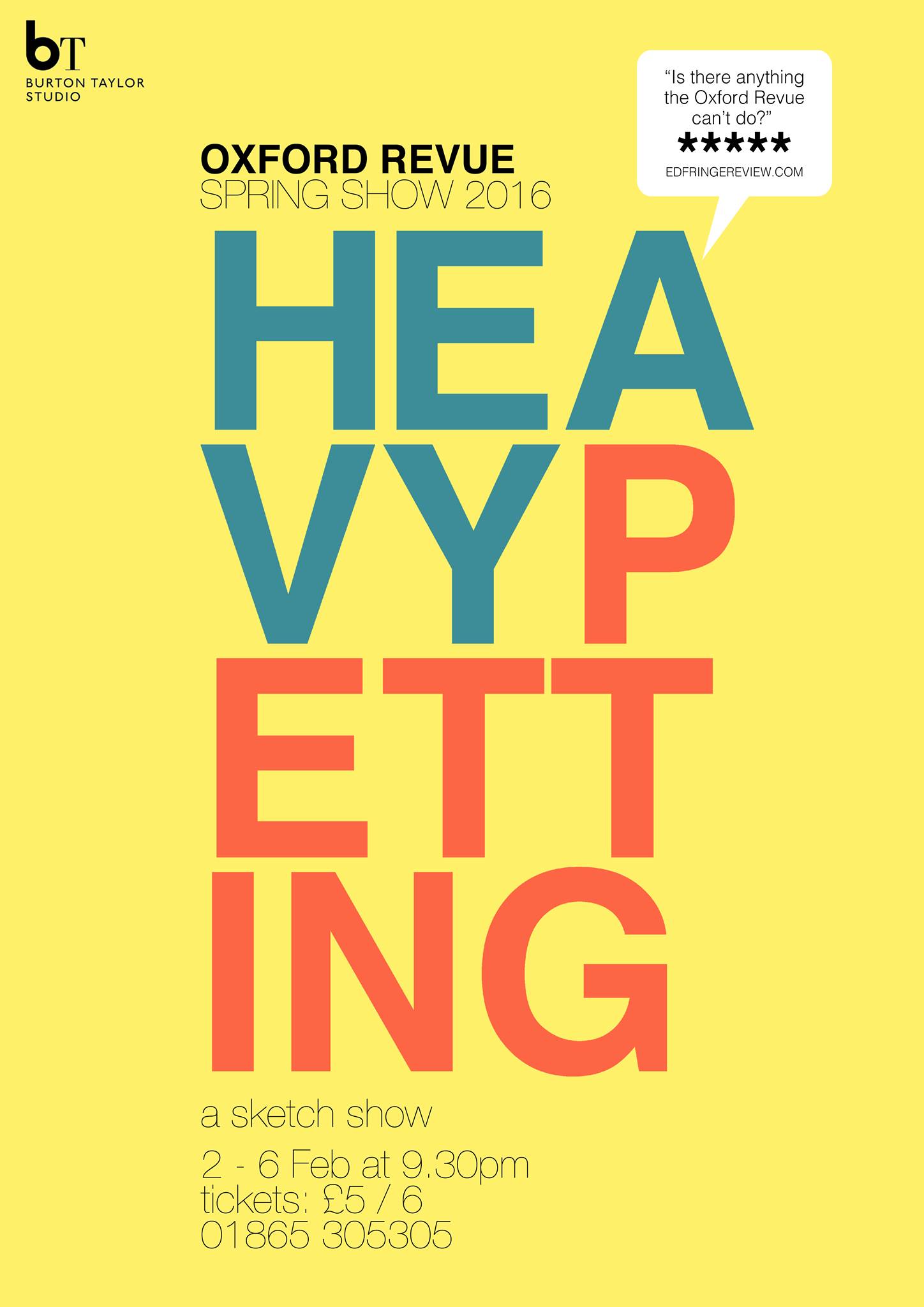 The return of something resembling a legend, an institution, was heralded by the confidence of the classic opening and closing tracks, among them Stevie Wonder and David Bowie. This is Heavy Petting. We haven’t seen the Oxford Revue at the BT Studio in Hilary since 2014’s Family Values, before this reviewer’s time, and you can tell that the show, a working version of their upcoming summer tour Hello You, is a hot event from the numerous posts on the Facebook page from people desperately seeking tickets.

The audience were noticeably reluctant to fill the five seats either side of the stage, isolated from the main body of seating; this was sketch comedy, ‘Dame Comedy’s savvy sister,’ as we were energetically informed early on, and she was probably more than capable of turning on us. But Georgia Bruce’s first effort as a Revue director was altogether efficient and warm – a sketch about bragging how little you had revised for a GCSE exam rang several loud, Oxonian bells, though some of the most ingenious sketches were a Scandinavian-drama version of Skins, and a vision of a Bono who dwelled in a bin and was summoned at the mention of three very important words. The four cast members handled the fast-paced show with aplomb, and it was a rare delight to laugh this much without hysteria during an Oxford term.

I’d like to ask that the Revue drip-feed me their darker stuff through an IV, like the will.i.am. sketch (in which Alexander Fox’s considerable talent for portraying pure creepiness was wisely given centre stage); I lived for it and couldn’t get enough. This was a show aimed at a back-to-basics approach after the more experimental fare of recent years, but the couple of meta lines that did crop up (‘I can always go back to my big empty weird house,’ ‘It’s John Cage’s 4’33”’ during a sound failure) were beautiful. The sketches flowed well, with a few customary duds (Danny Dyer-ies, a talent show sketch and the Sex-bike, for me). Several of the cast have experience in the Oxford Imps, and the skits were at their best when this background in improv was made apparent, or when they weren’t afraid of engaging in more physical comedy, as in Jack Chisnall’s horsish slobbering over Fox’s hand. Dom O’Keefe looks and acts much like the colour-inverted image of Jack Whitehall, but I didn’t hate him at all, and Chesca Forristal’s shouty and solemn alien imposter was a highlight.

It wasn’t a well-oiled machine just yet: some of the set-ups were better than the punchlines; the show’s multimedia (using a projector for a meme-ish, endearingly shit PowerPoint presentation) could be developed further; some sketches overstayed their welcome, and there were a few slight issues with timing and line-rushing. But it’s great to see people onstage occasionally creasing at their own material. Besides, it doesn’t really matter if things fall apart a bit or if they’re a little sloppy, as long as it’s funny. And this was.