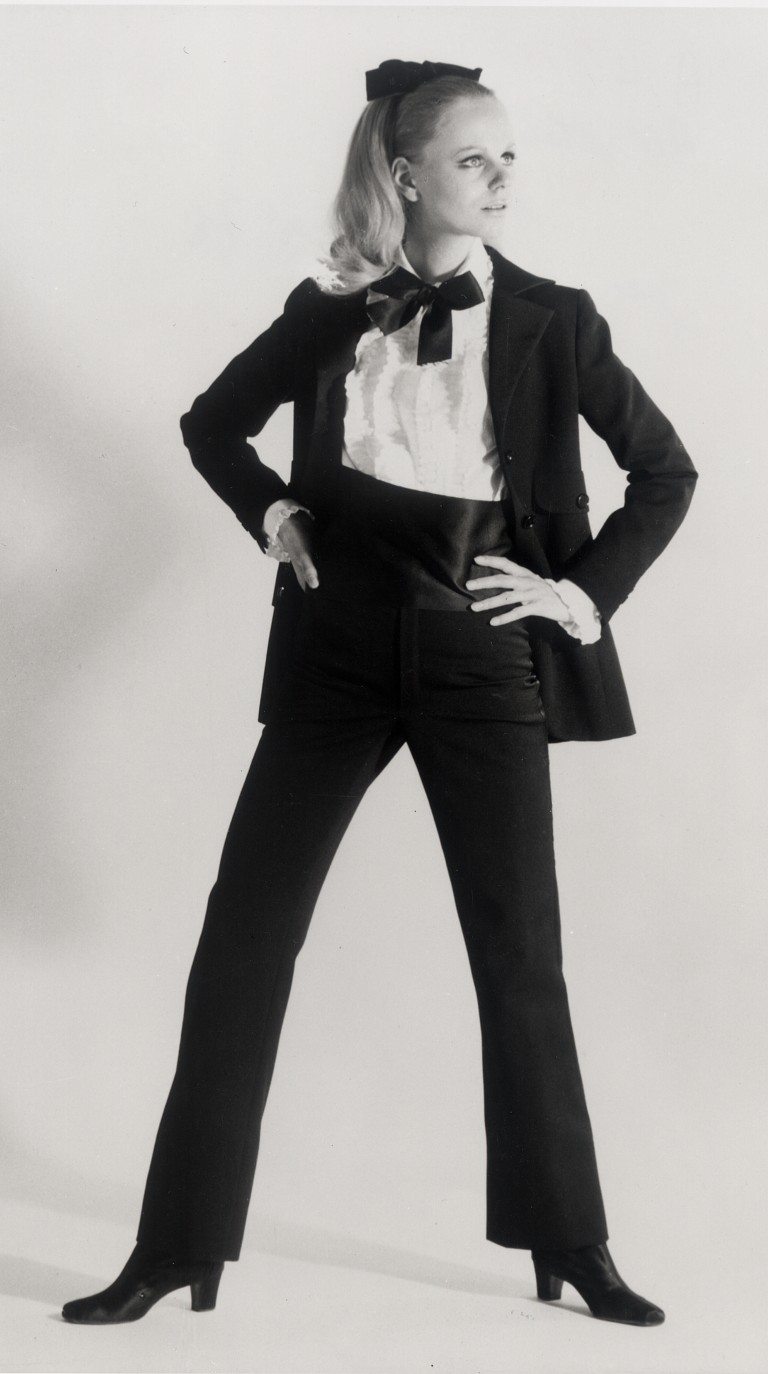 “He strains too hard to convince the world he is hand-and-hand and eye-to-eye with the very young” was New York Times writer Gloria Emerson’s biting critique of Yves Saint Laurent’s “Pop Art” collection of 1966. The pop art Warhol dresses, called “lumpy” at the time, are now fully recognised as an iconic fusion of art and fashion. However, the most significant piece of the collection, more social statement than fashion statement, had to be Le Smoking, the first tuxedo for women. It consisted of a classic dinner jacket worn with trousers and a ruffled white shirt, black bow tie and a wide satin cummerbund.

Inspired by a gentleman’s smoking jacket, with a deliciously androgynous sexuality smouldering beneath the clean angular cut, it wasn’t long until the louche silhouette of Le Smoking was elevated to epochal status through the genius photography of Helmut Newton. Shot in a hazy Paris alleyway, an angular model with slicked back hair in a masculine stance is entwined with a model wearing nothing but a pair of black stilettos. Newton always had the power to imbue his subjects with potent sexuality yet stark simplicity and this was no different.

The rise of Le Smoking happened during the “second-wave feminism” of the 60’s, encouraged by developments like the availability of the contraceptive pill. However, even in these times of a supposed advancement of women’s rights, women wearing trousers in public was considered completely crass and scandalous. Even into the 1970s, most upmarket restaurants or hotels did not give entrance to women wearing trousers. Nan Kempner, socialite and long time patron of YSL, was famously denied entry to Le Côte Basque in New York whilst wearing her YSL tuxedo suit, following the guidelines set  by Le Côte’s manager declaring “Pants…do not belong in a restaurant any more than swimming suits”. Nan’s legendary response of taking off the trousers and waltzing into the restaurant wearing the jacket as a mini dress instead was a prime example of this new generation of feminine style and sexuality standing defiant in the face of archaic protocols. Le Smoking presented feminine sexuality in a revolutionary way, not relying on exposed skin or corseted waists, instead expressing a virility through the dashing cut of a suit.

It wasn’t long until members of Saint Laurent’s posse of it girls and film stars, such as Catherine Deneuve, Liza Minnelli, Lauren Bacall and Bianca Jagger, took to this daring new silhouette, acting as ambassadors for this new expression of gender fluid femininity. A white YSL trouser suit became the signature style for Jagger, who famously wore an YSL cream tuxedo jacket with nothing underneath for her wedding to Mick Jagger in 1971. She recalled in 2008, following Saint Laurent’s passing, “This was a radical change for professional women, who could wear a practical suit which also looked elegant,”. Catherine Deneuve similarly said in 2005 in homage to Le Smoking, “It really does make you feel different as a woman, it changes the gestures”. By borrowing style from the boys, Saint Laurent had blurred the lines between genders, allowing women, at least in terms of appearance, to imbue themselves with macho power in both professional and social circles. “A man’s article of clothing thus became the symbol of female emancipation” as surmised in the press release for the 2005 retrospect exhibition of Le Smoking.

Ironically, Saint Laurent had done to admirable effect exactly what Gloria Emerson had blasted him for in 1966. He was indeed “eye to eye with the very young”, creating styles that flouted the rulebook, designing for a future generation of strong vibrant women who didn’t need to define themselves by gender stereotypes. Le Smoking has had enduring appeal and has been constantly reinvented as it represents an attitude rather than a fashion trend. To end on the words of Yves Saint Laurent himself on his seminal creation. “For a woman, Le Smoking is an indispensable garment with which she finds herself continually in fashion, because it is about style, not fashion. Fashions come and go, but style is forever.”