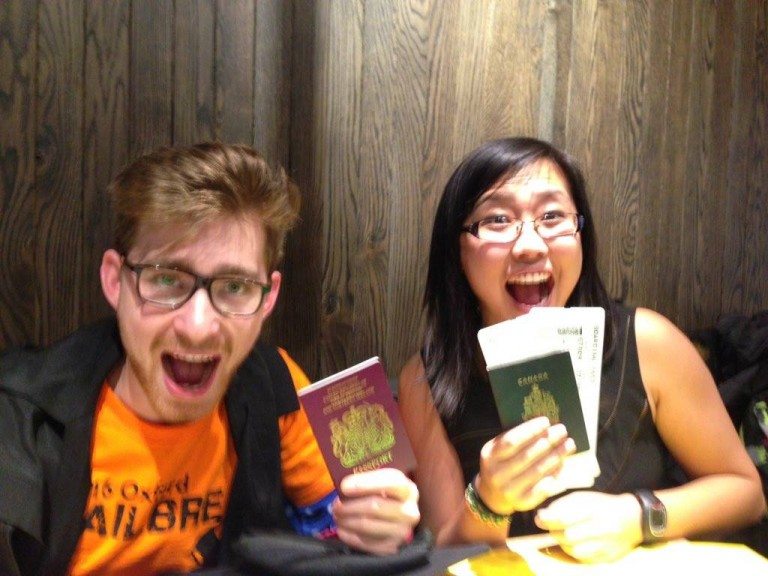 By the 9pm deadline on Sunday Oxford students had reached Milan, Budapest, Berlin and Prague. Jailbreak winners, Prisoner’s Dollema managed to fly all the way to Johannesburg, just short of the all time distance record of Tokyo.

Participants had 36 hours to escape from Oxford without spending their own money on transport. Instead groups had to rely on good will, luck and any money they could raise whilst travelling to get them across the globe.  While many of the teams journeyed north to Liverpool, Leeds and Edinburgh some managed to get much further.

One team, Total Newsance, reached Istanbul but not before bumping into Stephen Fry in London.  The Froggies won the non-flight distance prize journeying to Prague by train and car, closely followed by Young Warriors who were only 35k behind them at the polish border.

Prisoner’s Dollemma, a team of three Green Templeton College students, travelled the furthest by far, reaching Johannesburg in time for the Sunday deadline. Christopher Burningham, Helen Gao and Antonio Ji Xu spent the morning in Oxford fundraising before they managed to gain the sponsorship of GTC alumni for an international flight. The team said: “The decision was between Beijing and Johannesburg – although the idea of Chinese New Year in China was tempting, Johannesburg is around 600 miles further away and we had never been before! South Africa here we come!” Despite having some trouble getting through Heathrow security in animal onesies they eventually reached the South African city.

The group came very close to breaking the all-time record for Oxford Jailbreak needing only to travel an extra 300 miles to Durban from Johannesburg. The record was set in 2014 when a trio of New College students managed to fly approximately 5,967 miles to Tokyo. However they decided against the extra travelling: “After much consideration, we decide not to spend more money on travel to break the record and give it to charity instead – since this is the whole point of Jailbreak!”. But as they added: “we still can’t believe we made it so far!”

Oxford RAG, the event organizers, has managed to raise £22,000 so far through this year’s Jailbreak. Despite fewer participants than in 2015 they are looking to “smash” the £30,00 raised last time and hit their £35,000 target in the coming weeks.

Prisoner’s Dollemma was not the only team to make an unexpected journey. Total Newsance had just aimed to get across the Channel but by Sunday evening found themselves in Istanbul. The three New College first years managed to raise £500 in London on the first day and then promptly boarded a 9:35pm flight to the ancient transcontinental city. “It has been incredible, it’s literally the best thing we’ve done” Chemistry student Annabel Lawrence said. “We’re incredibly grateful to everyone who has supported us and to the human kindness that we have experienced this weekend”.  They even met Stephen Fry in London who, according to the group, joked he would have given them more money if they were from Cambridge but said he liked their zebra onesies.

According to Jailbreak leader Joe Hill another team, Positively Lost, were kindly offered a ride on a Romanian mini-bus to Luxembourg and was treated to the whole history of Romanian pop music, renditions included. They were: “quite glad to get off at the other end” he said.

The third year classics student from LMH stressed how enjoyable the buzz around Jailbreak has been: “We on the Jailbreak team and the RAG Committee are over the moon with what all our amazing Jailbreak participants have achieved this year.”

“I think Jailbreak is such a great fundraising activity because it is so effective in Oxford, and in a student population. It’s become an established name that people know is an exciting event, and therefore everyone gets really enthusiastic about it”. He also highlighted the importance of Jailbreak for the charities involved given that: “we are able to ensure that every single penny raised by participants goes directly to our four charities.”

You can also donate directly to Prisoner’s Dollemma here: https://mydonate.bt.com/teams/pd2016 and find their twitter here: @dollemma2016