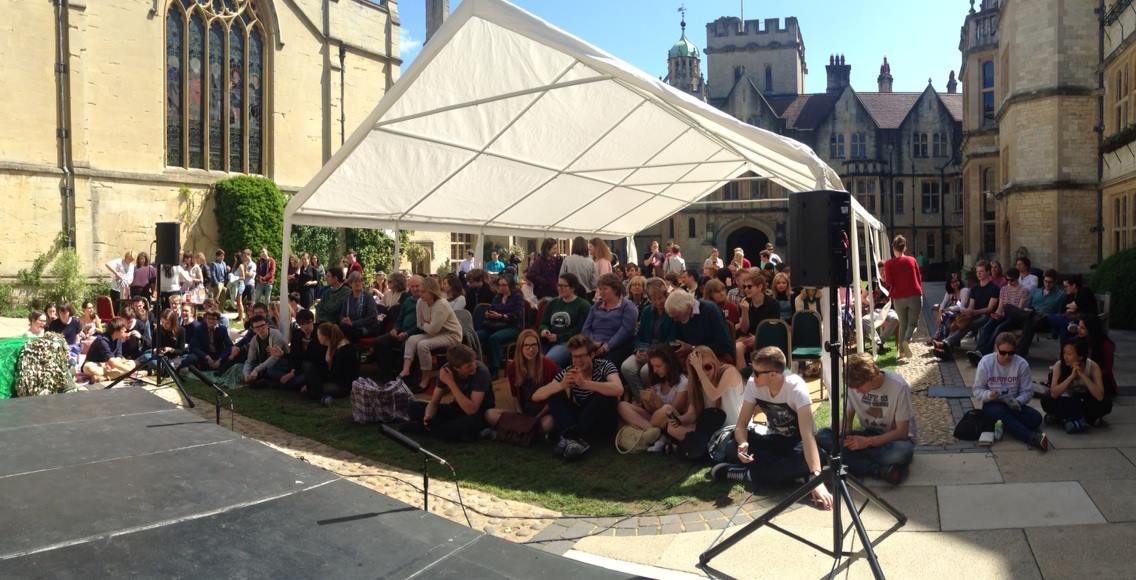 I was in a café with my fellow section editor, Chloe, last week, telling her how I’d become a part of the Arts Committee at my college. To which, Chloe replied, “What’s that?”

I was aware not all colleges have Arts Committees, and went on to explain that the Committee is there as an extension of the Arts rep; a Committee consisting of more specialised roles, such as a drama rep, a dance rep, a music rep etc., who help the Arts rep put into place the numerous and various types of projects they want to promote. Chloe stared at me blankly and informed me that up until recently, (they’re introducing one this year) Queen’s College hasn’t had an Arts Rep.

I was taken aback, and having done some investigative work, I now realise that my being at Brasenose rather spoiled me; my surprise at Queen’s lack of an Arts Rep was rather like that of a rich kid first realising that not everyone has a butler. I asked a bunch of people from different colleges (who are all very involved the arts) to share their experiences of college-level drama, and asked them how their colleges encourage their involvement in theatrical productions. [Just as a side-note, I am not down-playing the importance of the other arts, it’s just this is the “stage” section of the paper so I’ve got to keep a narrow focus.]

Thankfully, most people had JCR-elected Arts Reps. But the role seemed to vary in its function from college to college. At Exeter and St. Peter’s, I was told the Arts Rep is a role that seems to revolve around weekly emails, informing people of opportunities outside of college, and making sure people support their fellow students by going to see their plays (i.e. setting up a ‘[Said College] goes to… [PLAY]’ group on Facebook). All the people I interviewed said their college did have a fund or grant that enables people to put on plays, and that the Arts Rep is usually in charge of promoting awareness of this. But each person stressed how the process for applying for money and how it works exactly needs to be publicised in a clearer away, and generally be publicised more.

“The Arts Rep is responsible for organising all college arts events, but they tend to not be heavily involved in theatre-side of things.” (St. Peters)

At Catz too, the Arts Reps “Don’t organize any drama. Their main role is sorting out Arts Week in Trinity, as well as some open-mic nights, arts funding etc.” Christian Amos, my Catz interviewee, was not the only one to tell me he “100%” relied on university-wide plays alone, (organized by OUDS) in order to be involved in the Arts. Christian did say this didn’t bother him in the least, as it allowed him to meet more people outside of college, and I agree that this is certainly a positive of university-wide projects. But the fact that he claims that “At Cambridge there’s a really strong sense of college drama societies and productions, whereas it’s almost all done on a university-wide basis”, makes me think: Why? As of the point when university is a place in which people should try new things and get involved in as much as possible, why should colleges not thrive on converting more and more people to the Arts?

University-wide productions are almost impenetrable for most Freshers to break into, and we constantly see the same people cast in everything. Some people have the time, confidence, resilience and patience to go through a never-ending process of auditions and call-backs, but there should be an outlet for all those who don’t, or just want to have a bit of fun and try new things. St. Hilda’s for example, has an annual play of which the cast is exclusively from St. Hilda’s – it’s a great way to bring people who never usually run in the same circles together, and strengthens the college community.

My LMH and Keble contacts didn’t get back to me on time, but I wondered what the organization of drama was like in colleges that have their own theatre. Speaking to my Uncle today, an LMH alumni, who like all college alumni, is constantly pestered for money to help improve college spaces in one way or another, I couldn’t help but wonder… Why should alumni help build stages within colleges if colleges don’t play an active part in getting people on them?

Arts Weeks are also rarer than expected; Catz have one, Peter’s has one, Brasenose have one, and Exeter, despite not having one, is actively involved in TSAF, but so many people I spoke to didn’t have one. [Another note: I couldn’t ask all 38 colleges in the space of a week, but if your college has one please email us and we’ll advertise it it!] In the words of Brasenose’s Arts Rep, Chloe Wall, Arts Week is a week that almost forces “everyone in college to get involved in something – be it jazz, journalism workshops, pottery classes, or plays with huge casts performed on the quad”. [It’s in 3rd week of next term get hyped] When interviewing Chloe, I asked her a few questions about her role and why she does it. She was on the Arts Committee last year and realised she wanted to be Arts Rep through seeing “how exciting it is that we can literally organise whatever Arts event we want, whenever we want”. And she’s right – it’s empowering. When asking her why she chose to expand the Arts Committee to more than double last year’s numbers, she had this to say:

“I think a committee is vitally important- one person can’t organise all the Arts for a college. A huge committee (some have even said I have my own small army) means that everyone who wants can get involved and work together to hopefully create one of the most exciting years of Arts in Brasenose. Each person genuinely had something totally unique and valuable to offer and proved to me they wanted to be involved in a major way. So I spent hours in front of a spreadsheet, working out new roles, and a way for everyone to fit in according to their talents. It’s so obvious – I’m so excited – pahahaha sorry”

I struggle to believe that Chloe’s enthusiasm and the numbers of enthusiastic Artsy people in and outside of the Committee at Brasenose are just a freak statistic within the university. The very fact that there are so many incredible university-wide projects is a testament to the talent and dedication of Oxford’s students interested in Drama (and in the Arts more generally). But it’s a limited showcase. We need more. It’s time individual colleges to truly reflect their students’ enthusiasm for the Arts.