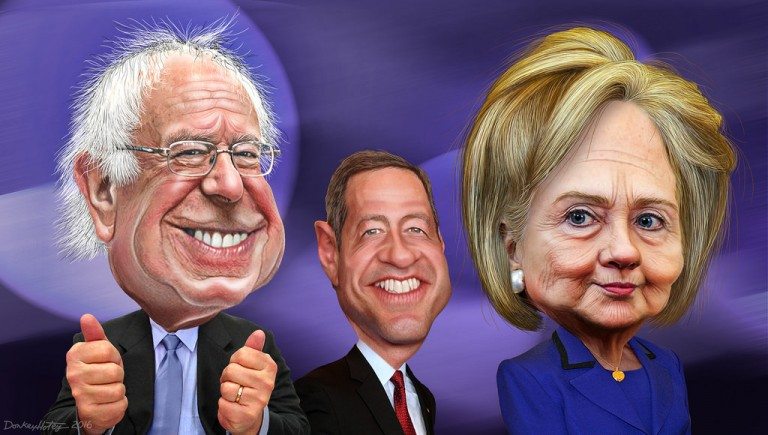 Iowa proved no candidate can rest on their laurels

Underneath the controlled exterior, Hillary Clinton’s team must be frantically redesigning their strategy in a way that they could not have imagined almost a year ago. In the ten months between the announcement of her candidacy and the Iowa caucuses, the White House has predominantly been seen as hers for the taking – for some time, she seemed to hold the unchallengeable position of a venerable stateswoman guaranteed for the Democrat nomination and opposed by a fatally fractured Republican Party. The Iowa caucuses, while strictly bearing little legislative influence on the actual presidential election, must therefore have come as a nasty shock to her relatively slick campaign; she won, but hot on her heels was ‘Democratic socialist’ Bernie Sanders with only a 0.3% smaller share of the vote.

Indeed, Sanders was not even a Democrat this time last year, giving up his title of the longest-serving independent congressman in order to make a surprise bid for the presidency. Sanders fulfils the role of the earnest outsider in the presidential race, and it is this which has fuelled his support; his opponents may disagree most strongly with him out of all other candidates, but his unabashed socialism means his supporters are ideologically committed and unlikely to swing towards Clinton. This socialism is perhaps very different to the British socialism of Jeremy Corbyn and co., but the word still holds connotations in the USA which are difficult to reconcile with democracy and prized freedoms, and thus Sanders’s ability to win over the progressive side of the Democrats with the promise of socialism must be considered an impressive political achievement.

The battle for the Republican nomination has meanwhile become a three-horse race; Ted Cruz and Donald Trump were joined by Marco Rubio at the top of the vote count while the rest of the many candidates, including Jeb Bush, were condemned to near obscurity. Rubio, the affable Hispanic senator from Florida, will pose more of a threat to Cruz than Trump in the run-up to the nomination. While Sanders is striding towards the left of the comfortably centrist Democrats, Rubio and Cruz both represent the hard-line right of Republicanism (while not quite matching the zealous xenophobia of Trump). In Rubio’s favour is his capacity to compromise while still maintaining his ideological faith to the Republican right – he lost some Tea Party support for supporting a bipartisan immigration reform package in 2013, a move which seems only to have strengthened his support within the moderate camp of the party and heightened the threat he poses to his opponents.

Despite the similarities between Cruz and Rubio, Cruz was the poster child of the Tea Party during the 2013 government shutdown (an event he controversially created while still a freshman senator) and has less of the GOP’s loyalty. Yet it was Cruz who took the Iowa Caucus with a 3.4% lead over Trump, proving that the Tea Party’s influence on Republicanism has not been quite as subtle as the party’s more moderate members would suggest. He is perhaps less conciliar than Rubio, his equal in terms of most domestic and foreign policy, but his victory in the caucus is an encouraging sign for the rest of his campaign.

Trump, the most widely debated candidate of the Republican race, came second to Cruz but not so dismally that his hopes of the nomination have been dashed. In fact, the closeness of the result could only encourage Trump to push further towards the right and attract Cruz’s Tea Party supporters with yet more populist rhetoric. With Trump representing an even further right position than his two key opponents, the Iowa Caucus has made clear that there is yet no room in the mainstream Republican race for a liberal conservative; despite the caucus’s relative unimportance compared to the upcoming primaries, it does at least give a good picture of each party’s general standing before its position is solidified with the choice of a single candidate.

The Iowa Caucus has traditionally had 50% success or lower in predicting who will win their party’s nomination – as such, to use it as the basis for a long-term prediction would be giving it too much significance. Nevertheless, we can safely assume that the nomination race will be more contentious than 2012 and even 2008 as both parties vacillate between their moderate and radical wings. If the caucuses are correct, the presidential race will be between Clinton and Cruz, placing a liberal but hawkish Democrat against a dogmatically conservative Republican. If these are not the candidates, however, this conflict between two comparatively centrist positions could be expanded into a race between outright socialism and the extreme right-wing – Trump versus Sanders, while ultimately unlikely, would create an ideological battle for the presidency perhaps unprecedented in American history.

The 2008 caucuses saw decisive victories for both Democrat Barack Obama and Republican Mike Huckabee; John McCain’s measly 13% compared to Huckabee’s 34% is indicative of how misleading the Iowa results can be even in times of outright victory or defeat. In 2012, Obama comfortably held his position while the two leading Republican candidates were separated by a single 0.01%, displaying the ideological fractures in the GOP which have persisted into 2016. No caucus can define a presidential election, but this year certainly suggests a much closer presidential race than we have seen since Bush versus Gore in 2000.

The Iowa Caucus was designed to be a ‘meeting of neighbours’ rather than a battle when the Democrats introduced it as part of internal electoral reform in the 1970s and the Republicans adopted it soon after. Why, then, is a fairly inconsequential procedure regarded with such interest by the press and the parties themselves? The answer lies not in its formal importance (or lack thereof), but in its informal function as the midpoint marker of the presidential race. The campaigns of the candidates have been rolling on since the middle of last year, and the election itself is not until November; Iowa is the first opportunity for serious candidates to properly estimate their chances of being nominated, and the last for candidates whose poor performance will prompt a graceful exit from the race.

What happens next will be the subject of countless strategy meetings, debates, and future campaign plans. Those candidates who can must now capitalise upon their Iowa support and continue to build up momentum for the primaries – for the leading three Republicans, this will no doubt entail some untangling of their respective positions as Cruz and Rubio both strive to establish themselves as the ‘true’ representative of hard-line conservatism. Clinton and Sanders will face the altogether simpler challenge of winning over mainstream Democrats with their distinctive brands of liberalism, with Clinton struggling to keep the primary position almost guaranteed to her when she first announced her campaign. As a particularly close Iowa Caucus has proven, a point or two could now make all the difference in November’s presidential election.