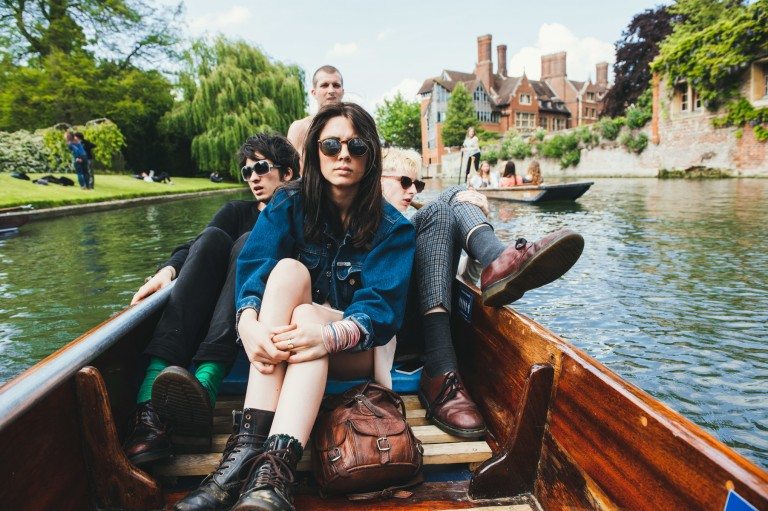 2015 was an impressive year for British-band Wolf Alice. Having secured a Brit award nomination for Best British Breakthrough Act and a Grammy nomination for Best Rock Performance (with their track ‘Moaning Lisa Smile’), the band are now getting ready for another UK tour. They play at the O2 Academy in Oxford on Sunday 13th March.

The band’s Grammy for Best Rock Performance is a testament to their focus on live performance. I began by asking Joel how it felt to be preparing for another UK tour: “I’m just pumped for it. We hadn’t played since December, when we started rehearsing again in mid January, having just come off the tour from America. You know, it wasn’t the same kind of shows as in the UK because of the support here from radio shows and stuff, so we’re really looking forward to getting out there and playing some of the surprises we’ve been practicing over the last few days.”

After a stellar performance in the charts with the release of their debut album My Love Is Cool, which peaked at number two in the UK last summer and made inroads into charts worldwide, I asked whether the shows on this tour would be featuring mainly material from the debut album or if new material would be aired. Joel responded: “I guess we haven’t really decided at the moment. We’re just going to try and put on the best show possible really. Yeah, the majority of it will be from Love is Cool because you obviously want to play songs the audience is going to know but they’re might be a few little twists and turns. Of course, we don’t want to make it a repeat of the last tour. We’ll be doing everything in our power to make sure the people that come get a brand new show. But we’re still working out the finer details.”

On how the creative process materialises within the band, Joel commented: ‘It’s very much a joint effort – all of us sporadically doing things. Everyone is delivering five or six new demos at the moment. But really, everyone’s coming up with ideas all the time. It can be a full idea – a fully-fledged five-minute song – or maybe just a five second riff. So the process is dependent on this really. To be honest, every song has been different so far, there’s never been a set formula for doing things. I guess it will be the same kind of routine for the next album. If someone comes up with all the best ideas, that’s fine. It we all come up with good ones, that’s fine too.”

By this point, Joel had touched a lot upon the difference in reception the band received in the US in comparison to the UK. I asked him to elaborate on what that meant in reality, particularly in live performance. “America is amazing, because you can in some dive-bar in wherever and there can only be around 20 people there; but no-on is ashamed to be really passionately into the gig. It can be a really rowdy atmosphere. Because our gigs got so much bigger even whilst we were out there, it kind of snowballed. I guess the main difference in the UK is that crowds can often be a bit more reserved; it takes a bit of a while before everyone’s in the mosh pit, that happens a bit later on. The UK’s still the best though. We still love the UK it’s just that the US has this atmosphere that is unique.”

This year’s Grammy nomination has confirmed outright the band’s success across the Atlantic; a huge achievement for any British band. However, success has often been British musicians’ worst enemy across the pond, so I asked briefly whether the recognition had changed the way band approached their writing. Joel responded, “Not really. I’m just really excited to play new material. It’s important to see everything that’s happening in this cycle, as something great that’s happening now; it’s exciting for us and if you lose that excitement it’s a shame.”

I moved on to ‘Moaning Lisa Smile’, the track nominated for the Best Rock Performance Grammy. Initially released on an EP back in 2014, the song’s arresting energy makes it one of Wolf Alice’s most individual creations. Asking about the song’s conception, Joel responded: “Well it was one of our earlier songs. It was initially just this riff that Joff had, that we used to sing the lyrics from ‘Old Man’ by Neil Young over – in this rehearsal space in Camden that no air-conditioning – and we just used to sing these lyrics over and over again. Eventually though it became something more cohesive! The song portrays this modern-day American girl tragedy. She’s an archetypal character – and the song’s a reflection on that. The song never got put out on the album in the UK. So it never really got a proper release apart from on the EP; everyone seemed to dig it, so we thought we should definitely give it a bit more attention.”

Because of the relatively quiet release of the track in the UK, I wondered whether the band was surprised that the song eventually got picked up by the Grammys. He replied, “Yeah definitely! Some award ceremonies give you a bit of a heads up but the Grammys don’t do any of that. Yeah, I woke up in America and Catherine Marks, who produced the record, just text me saying you’ve got a Grammy nomination, I couldn’t believe it. Yeah, I didn’t really know what to say for about 20 minutes!”

With the Grammys taking place in LA on Tuesday, Wolf Alice have the opportunity to really assert themselves on the world stage. Their category is a tough one, with Alabama Shakes and Florence + The Machine also up for the award. But should they upset the odds, they will put themselves in an even stronger position to pick up the Brit award, also later this month.