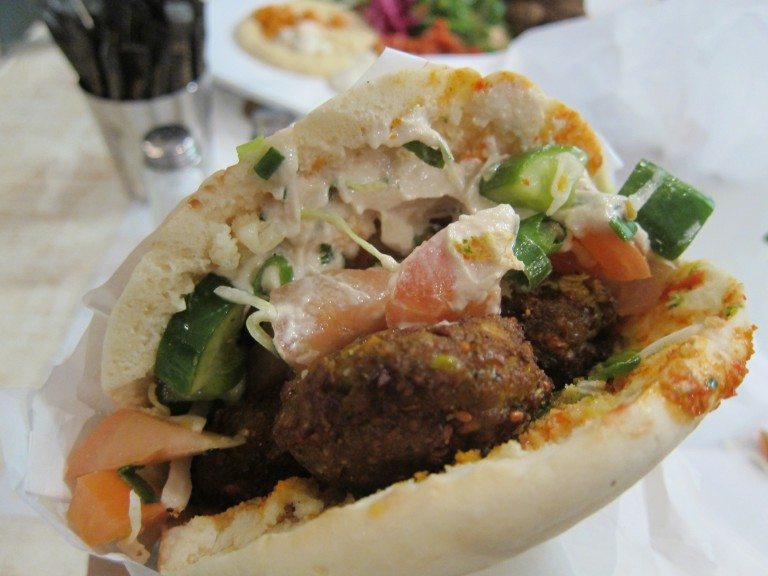 No beef – life as a vegan in Oxford

I am walking home at 2 a.m. and I see a bright light. There are only three things that radiate such comfort: my bed, one of my friends, and a food truck. At 2 a.m. it is usually the latter. Hassan’s Kebab Van is a staple for early morning cravings, whether they are from late nights working or late nights dancing. I, as most people, have stood in line for almost half an hour, making new friends and anticipating the first bites of falafel and chips. As a vegan, many ingredients, dishes, and restaurants have been deleted from the list of possible options. Falafel, however, is an accessible, simple, cheap and, (sometimes) healthy choice I have found everywhere I have traveled.

I get to the front of the line and order the usual: falafel and humus and a portion of chips. The falafel is classic, heavy and satisfying, and every chip is cooked to a crunch (though I would recommend avoiding Hassan’s mysteriously transparent and sweet ketchup and grabbing ketchup from anywhere else open). It is the the perfect meal for anyone hungry and in a fatigued delirium, easy to carry back to your room or on an adventure through the streets of the city centre.

If you are looking for a falafel fix in the daytime go to Najar’s Place. Simply put, the blue kiosk on St. Giles street serves the most delicious falafel I have ever tasted. The ultimate falafel is fried crispy on the outside and then warm, soft and fluffy in the middle. Najar’s is exactly that. You start with the base of hummus, sauce (the chili sauce is hot but worth it if your sinuses are strong enough), and a layer of crushed falafel. Next you add toppings. The choices are endless but my personal favorites are roast peppers and potatoes, cauliflower and aubergine, and baba ghanoush and sun-dried tomatoes. Every topping is uniquely spiced but complimentary. Finally, the wrap is sprinkled with salad and tomatoes, folded, and baked to a toasty light brown. The only way Najar could make his place better is to add a dairy-free milkshake (wink wink!).

I am a visiting student from a college near New York City, the city that never sleeps and always eats. I have been spoiled by the bacon double cheeseburgers, served at multiple vegan fast food restaurants, and the raspberry, strawberry, and peanut butter cheesecakes, eaten at extravagant birthday dinners. Cooking, eating, and exploring food is a way, my favorite way, to experience any new city or country. Though finding food that fits dietary restrictions can seem daunting and prohibitive, vegan food, as well as gluten-free and allergy-specific foods, are becoming more widely available.

Oxford has many more vegan and vegetarian options than I expected. But vegan food is not just made for or eaten by vegans. There are many unlikely foods from restaurants and grocery stores that can and are being eaten by anyone: falafel, salads (Pret a Manger’s falafel salad with squash and lemon is quick and wholesome), veggie burgers, pastas, vegetable dishes, and, on the other end of the spectrum, Oreos, certain doughnuts at the Co-op, and cupcakes from Green’s Café. The list goes on.

I have been vegan for about a year and a half. I have been vegetarian my entire life. The transition was difficult but, with education about nutrition, substitutions, and new, inventive food combinations and technology (cashew cheese, anyone?), eating in a way that takes into account the lives of animals and the state of the environment has never been easier than it is in our current day.