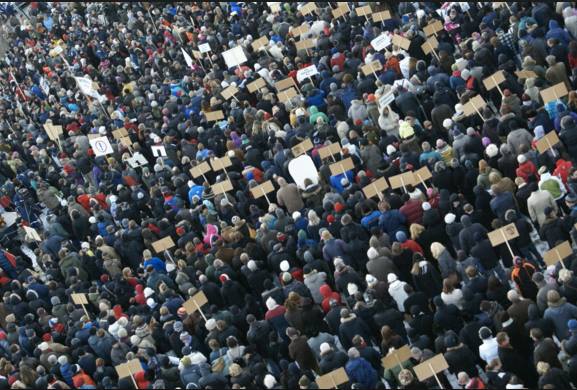 Let’s return to Tsarist Russia during the 1860s. The emancipation of the serfs in 1861 gave rise to a period of intermittent civil unrest. During this time, radical progressive thinkers, dissatisfied with the Tsar’s reforms, faced state censure and intimidation. However, the liberal opposition came full circle to resemble the regime as editors of literary journals censored the work of those whom did not toe their ‘party line’. The outlook of these so-called Liberals became less liberal. Although history is not repeating itself, parallels can be drawn between this époque and the UK today.

Toady there remains social injustice to be combatted. I believe the vast majority of the UK population supports the campaigns against injustices like sexism, racism and poverty. We are united against the same issues; but the unity ends here. There are innumerable social and political groups all with different ways of tackling injustice. You could say there are different denominations of the same faith. Some groups think their ideology is the best and purest of all; they form part of a progressive orthodoxy.

So sure in their conviction they are right, certain activist groups do not tolerate any views or opinions differing from theirs. Their ideology has morphed into a narrow-minded dogma. Their rigid mind-set is at odds with the world’s vagaries and exceptions. I’m thinking in particular of what has been called the feminist sisterhood, and those who campaign on LGBT issues are often as blinkered. Close to home, I am told the ‘Wadsquad’, a loud minority of radical students at Wadham, embody the worst of this intolerant attitude. They allegedly monopolise debate and harbour an atmosphere of intellectual intimidation to such an extent that moderate-minded students are reluctant to speak up in JCR meetings. This situation at Wadham is a microcosm of our society.

There are many examples of the progressive orthodoxy trying to outcast people who are, in the grand scheme of things, are potentially singing from the same hymn sheet as them. Take Chrissie Hynde, who was pilloried for saying getting raped at 21 was her fault. Germaine Greer was equally vociferously criticised for her comments on transwomen. These two women should be treated as allies, instead of heretics only fit for denunciation. Their offence is to have blasphemed against the doctrine of political correctness.

Hynde contested the absolute principle that a woman cannot be in the slightest bit responsible for getting sexually assaulted; Greer broke the taboo of questioning whether a man’s sex change is enough to make him a women. Her comments may have caused offence, but arguably they align with Simone de Beauvoir’s judgement that a woman is what you become. Following de Beauvoir’s train of thought, a sex change cannot undo years of experiencing the world as a man; I doubt though that Greer’s critics perceived this through their fog of outrage. The right and wrongs of these issues are complex and contentious. Or at least they should be contentious because, where the law does not legislate, little is black and white. Some of today’s progressive thinkers need to nuance their views to make them compatible with our nuanced world.

Some LGBT activists are also at fault for thinking in black and white, which the reaction to Jeremy Clarkson’s recent article on transgender people proved. His language was at times incendiary, especially the phrase ‘lop his todger off’. But what do you expect from Clarkson? No one is forcing you to read him. (Though to suggest that inmates would demand a sex change to get swapped to a different prison is undoubtedly distasteful and unsubstantiated.)

His statements to the effect that parents indulge their children’s whims by letting them switch gender do deserve closer consideration. Nonetheless, there is a fine line between analysing this issue and trivialising someone’s gender confusion, which he was at pains to avoid in his closing paragraph in which he expressed sympathy for genuine struggling with identity issues.

Clarkson is right to say that you wouldn’t indulge all of a child’s whims: many are pure fantasy. While it is possible to switch gender once, it must be extremely hard to switch back. Therefore, it is justified to question whether parents should allow their children to make an irrevocable decision about their gender at an age when the law does not consider them responsible.

And yet, the reactions I have read to the article centre less on the arguments he made than his right to make them. Ignoring reams of literary and historical writers who have convincingly tackled topics they have not directly experienced, it was claimed that Clarkson shouldn’t write on trans issues because he is ‘cis gender’. If anything, his distance from the issue permits more objective analysis. I read a tweet along the lines of ‘Clarkson’s a dinosaur. Thankfully they’ll die out soon’, which depicts his views as archaic. It will never be archaic to dispute widely held assumptions. I personally feel Clarkson here and elsewhere oversteps a line of decency, although millions of his fans and his employers must think the opposite. Thus it is misguided of Clarkson’s critics to assume that such provocative challenges to their doctrine will peter out.

Their beliefs are not sacred, despite how convinced they are of them. As long as we have freedom of speech in this country, people will be able to openly disagree. Instead of calling those whom disagree with us bigots, we should not be too dogmatic to explain why our views are superior. I reckon reasoning will be more convincing than name-calling.