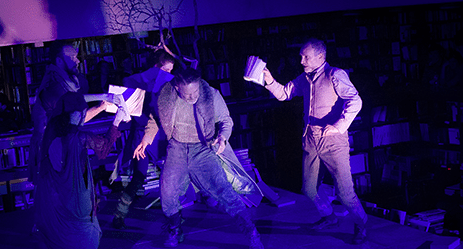 Walking into Blackwell’s to see Creation Theatre’s King Lear on Monday evening was a surreal experience. The books were all there, yet appeared unfamiliar under the blue stage lights, the customer service sign hidden by a lighting rig, and rows of seating posited between the shelves (“it’s like being in a private box!” as one theatre-goer near me endearingly remarked). As the actors appeared on stage, we got the impression of being transported to an unspecified time-period: the actors dressed in rags hinted at celtic tribes, or perhaps a post-apocalyptic world.

The production premise was ambitious: just five actors for fourteen characters, but they largely pulled it off. Apart from Lear (Max Gold) all the actors played at least two characters, differentiated by voice and manner as well as costume flourishes like hats and scarves. This took a little bit of getting used to, particularly when one actor was performing a dialogue between two characters, however the cast were imaginative in their use of props and space, hanging jackets on the Godot-esque tree and holding scarves disembodied in the air to give an impression of a human presence. Natasha Rickman, who played both Gonerill and Regan was especially impressive playing both sisters at once by alternating the shawl she wore, effecting quick changes of manner and speech to match. Once the audience was used to the character swapping, helped by eerie music cues, the plot flowed smoothly, and I applaud the actors’ dexterity and energy in sustaining such a performance.

Choosing to perform Lear in the round was particularly effective in the Norrington room, as the characters were raised up almost to eye level by a substantial stage that doubled up as a backstage area. This created several exciting levels to the production as the actors climbed down ladders to the maze-like floor space between the shelves and climbed up to walk along the bookshelves in a fantastically irreverent manner.

All the actors were clearly talented and capable, but for me Lucy Pearson as the fool and Morgan Philpott as Oswald stood out for bringing some essential humour to this otherwise very dark play. Gloucester (Michael Sheldon) and Max Gold together presented a powerful portrait of a father’s relationship with his children, highlighting the parallels between the two old men that has sometimes been missed in other productions. Perhaps Gold could have taken more time over Lear’s descent into madness, as he seemed to switch too quickly from authoritative to senile, although his tender scenes with Old Tom and Cordelia stripped figuratively of his title and literally of his clothes in the second half were masterful.

In this setting the books were given new significance, used on stage as props, thunder and lightning sound effects, and as the storm into which Lear is cast out. There were audible gasps from the audience when Edmund (Morgan Philpott) tore out pages of books, a powerful gesture in the bookshop backdrop, and the use of letters invited us to think about the dangers of miscommunication and the written word. Using Shakespeare’s original text, but with props like a newspaper, an intercom and suspiciously eighties-looking glasses, the audience were invited to appreciate the timelessness of the tragedy. That said, I did find it a little incongruous to see an obviously modern sports section and the crossword brandished as evidence of Gloucester’s death.

The infamous eyeball-plucking scene was appropriately gory, and the sight of Gloucester crawling across the stage with bloody bandages across his eye sockets and a voice-recorder strung around his neck, forever repeating his words of repentance was immensely moving. I was also impressed by the way the audience were drawn into the production, becoming complicit spectators in Lear’s speech to his daughters at the beginning and then part of the battle at the end as gunfire rattled from the speakers surrounding the audience seating.

Overall, this was a fantastic production of a classic that I would thoroughly recommend for Shakespeare fans and first-timers alike. My only caveat would be that with so much character swapping and a minimal set, prior knowledge of the plot and characters is required, but if you’re prepared for this, Creation Theatre’s play is immensely rewarding, breathing passion and energy into Shakespeare’s tragedy. 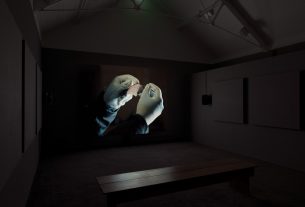