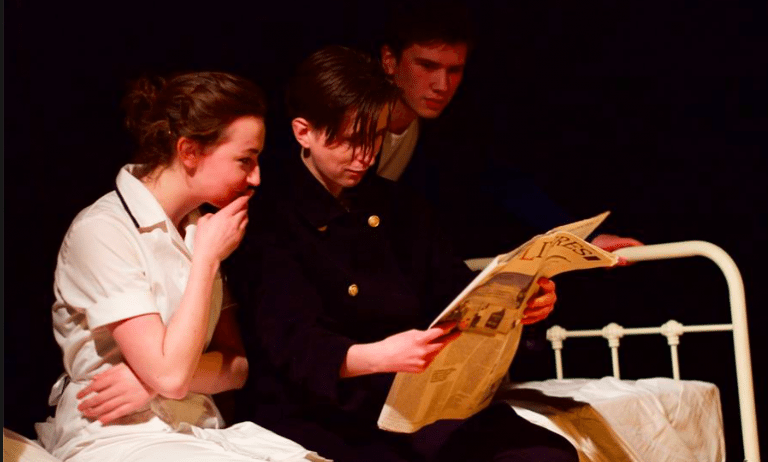 One might well say it’s an exciting and empowering time for the role of trans issues in the arts. Notably, the story of the painter Lili Elbe achieved international recognition in ‘The Danish Girl’ and, closer to home, both slots at the Burton Taylor Studio this week have been devoted to pieces of new writing giving voices to people – young and old, real and fictional – who have been subject to the difficulties of identifying as transgender. One of these pieces is Cashiered, written by Oxford student Hannah Greenstreet, which offers us a vision of the life of Albert Cashier, a transgender veteran of the American Civil War. I commend Greenstreet for attempting to transform a name in a history book into live, intimate action, but I can’t say the play itself is as effective as I had hoped it would be.

The set was kept simple but worked well: a translucent white curtain served to mark the scenes set around Albert’s hospital bed and also allowed for some interesting use of shadows behind the veil. This was put to especially good use in one of the final scenes in which, though we cannot see Albert except in shadow, his struggle is audible, palpable and affecting. The simple set also allowed the production to rely on sound effect in the absence of certain props, which was a nice touch. In fact, the sound design was strong in general, particularly in providing the background to a typically American bar.

But overall the production was rather heavy-handed; for instance, Laurence Bialy’s (playing Robert) elated outburst during Albert’s court hearing seemed inappropriate, and Albert’s own reaction to his sentencing – melodramatically dropping his head in his hands immediately before a blackout – was equally unsubtle. The script, too, is very much driven by plot rather than being poetic or reflective, which alone would not have been an issue had many of the lines not also felt generic and clichéd, which I was surprised to see from a playwright whose writing has been chosen for this year’s New Writing Festival.

I liked Franni Ball as Nurse Danby, giving a sympathetic and consistent performance. Her colleague Sister Bateman was conversely a distinctively unsympathetic and rather frustrating character, which Lara Marks conveyed, but in a manner too much like a parodic, two-dimensional villain. Marks came into her own much more in her second role, as male soldier Carter. Thea Keller’s performance as Albert Cashier himself grew on me as the play continued, and one monologue in particular was delivered very sensitively and with considered use of pace. In general however, Keller’s performance focussed on portraying the defiance of the character instead of displaying much emotional range, which I think made it difficult to feel much for the play as a whole. Perhaps the most natural and accomplished performance was from a relatively minor character, Sally (played by Anna Hagen).

Cashiered tells a rather unique story, and has some nice moments. In general, however, I just didn’t feel that the story of Albert Cashier, however worthy it is of being told, was made any more emotive or poignant by being adapted for the stage in this way than if it had simply been read as a piece of non-fiction.