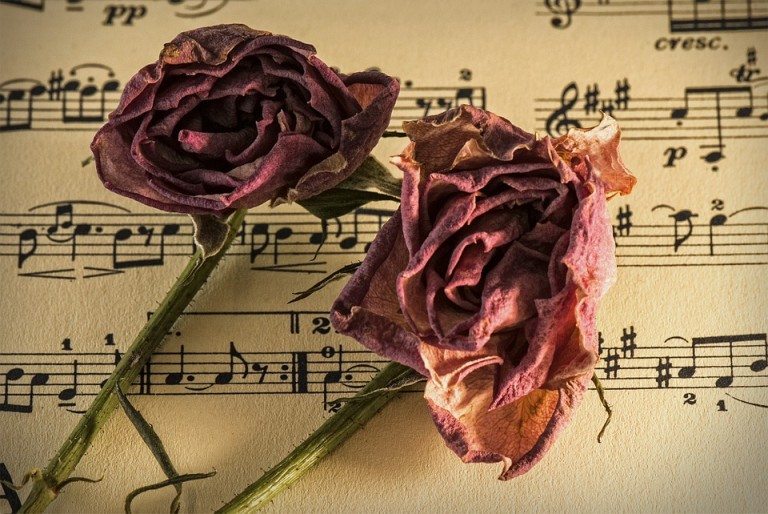 With Valentine’s day last Sunday (a day of commercial nonsense which takes all the spontaneity out of romance) my mind turned to the commercialisation of love in the modern music industry. I’ve got this stereotypical image in my head of how romantically music was used ‘back in the olden days’; I’m picturing boys standing outside the window of the girls they like, holding a jukebox and declaring their undying love, Romeo and Juliet style. I’m thinking of the crackle of vinyl, of a couple slow dancing round the living room in front of a fire. They’re scenes we so often see in romantic movies, which suggests that the romantic gestures of days gone by are better, somehow, than the ways in which we show our affection through music today.

I despair as I think of the modern concept of ‘love songs’ (and bear in mind I use that term extremely loosely). I’m thinking in particular of R. Kelly’s ‘You Remind Me of Something’, with the charming lyrics, “You remind me of my Jeep, I wanna ride it”. I mean, it’s not exactly Shakespeare’s “Shall I compare thee to a summer’s day? Thou art more lovely and more temperate”, is it? The hyper-sexualisation of modern music removes all the innocence and intrigue of a budding romance. There’s very few songs about the way we’ve all sat awake in bed, staring at our screens waiting for the person we like to text us back. I can’t think of any songs off the top of my head about the way you smirk to yourself on public transport when you get a message from someone special, or tracks which talk about the mixture of nerves and excitement you feel before going on a first date. Yet there’s so many songs about getting ‘jiggy wit it’, and it feels like the crude sexual language in the charts seriously undermines the sentiment of good old-fashioned courtship.

A lot of the sexual language used in these songs is extremely violent towards women as well, which is extremely problematic. Whilst violent sex is some peoples’ cup of tea, and they should be able to indulge in that without judgement (as long as they have consent from their partner), the number of ‘romantic’ songs in which women are degraded and talked about as if they are animals is incredibly worrying. Surely this is no way to tell someone what they mean to you? Maybe it’s technology’s fault – maybe pornography, and dating apps like Tinder are to blame for having killed modern romance. Conversations about sex happen far sooner into a relationship than they did for generations previously, and whilst it’s a good thing to have more liberal attitudes to sexuality and promiscuity, I can’t understand why this means songs have to be about sexual violence rather than feelings.

But maybe it’s not the fault of music consumers that romance seems dead – maybe it’s the fault of music producers. Every single One Direction song makes me cringe with how generic the lyrics are. Maybe the loss of romance in ‘love songs’ stems from artists who don’t write their own material – when you’re singing somebody else’s words, when you don’t feel the conviction of what you’re singing, is it any wonder that the end result is a clinical, robotic sounding construction? It’s not all bad, though. There are some songs in the charts which ooze sincerity and genuine emotion, take artists like Adele and John Legend, for instance.

With the commercial, unsentimental day that is Valentine’s Day now behind us, let us think about we can use music to reconnect with the romance of the past. I mean, what happened to making mixtapes, people? That’s one way in which we can rekindle romance of days gone by; by simply taking the time to design cover art for a CD and selecting tracks which mean something to you and your significant other, you can show that you care. And please, for the love of God don’t just make the playlist on Spotify and send them the link. Another way you can show that you care is by buying your boyfriend or girlfriend tickets to see their favourite artist. Just don’t be that couple that spends the entire gig with their tongue down each others’ throat – watch the show, make memories together. That should be what romance is all about, rather than grinding on some stranger in Bridge on a Thursday night.