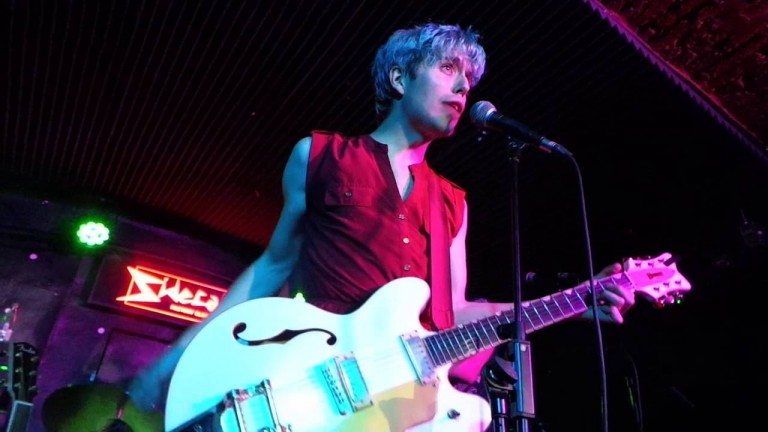 When Ezra Furman laughs that the crowd is ‘starting to get the hang of it’ three songs into his frenetic, marathon set, the crowd understand exactly what he’s talking about. Resplendent in a pink shirt, skirt, red lipstick and pearls, Ezra Furman is by no means a typical rockstar. Raising money on Kickstarter for his first LP only 4 years ago, Furman has since gained a reputation as one of the most mesmerising live acts around, addressing mental illness and gender issues with a brilliant blend of doo-wop and punk-rock. His latest album, Perpetual Motion People, has earned universal acclaim.

Live, he and his band, The Boyfriends, are completely exhilarating. The mood of his gruelling two hour set veers wildly, from the rebellious, manic feel of opener ‘Restless Year’ to the intensely moving queer anthem ‘Body Was Made’. Furman shifts from a visceral Lou Reed-esque snarl, as in his bluesy reworking of ‘And Maybe God is A Train’, to a vulnerable whisper in the intensely moving ‘Can I Sleep in Your Brain’. Though immaculate musically, the band throughout feels full of freedom, experimentation and fun, in particular the soulful blasts and snorts of Tim Sandusky (who apparently has ‘the mind of a diamond’) on the saxophone.

There is the sense that Furman can never be as close to the crowd as he really wants, making wild-eyed eye contact with individual people for seconds at a time, and complaining at one point that the intimate O2 stage is just too high. Despite his growing success, this never seems trite, and it’s easy to believe the surprised tone of his shyly mumbled ‘thank you’ at the end of each song.

There is truly something for everyone in this set, from the raucous, explosive energy of ‘Tip of a Match’ to more introspective studies of what Furman calls ‘some real shit about my real life.’ It is this honesty that makes this band so appealing, whether it is gender identity or Furman’s own depression being addressed, his personal ‘solidarity with the downtrodden’ shines through, as does his desire to be an empowering voice in an often restrictive industry.

By the end of the night, the crowd is just as exhausted as the band. Ezra Furman and The Boyfriends are exactly you want a live act to be, exhilarating, angry and moving. When Furman shouts ‘Good god I love this kind of music’, we can’t help but agree, this is exactly what good music should be.