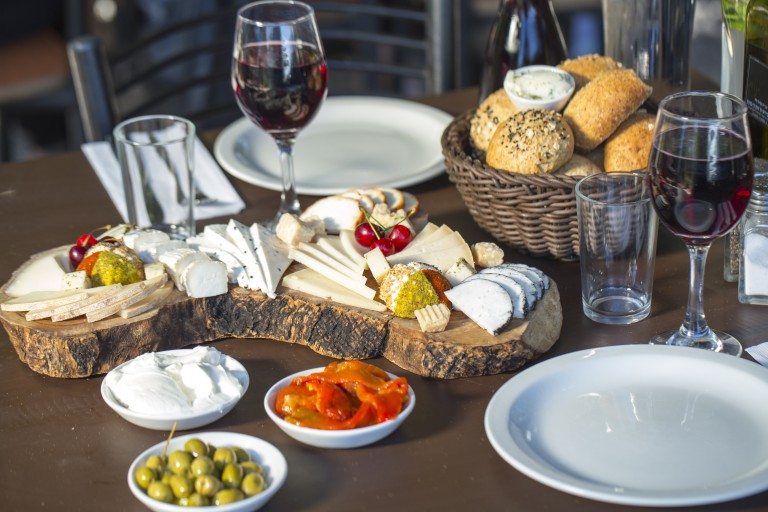 Dinner parties that aren’t what they seem

As term grinds on, the constant cycle of academic and social commitments can take its toll and many find that they just want a quiet night in amongst friends. Cramped, communal kitchens may rule out anything resembling a traditional dinner party but there are plenty of ways to eat, drink and be merry together nonetheless.

Wine and Cheese
The idea is simple, everyone one brings a different cheese and a bottle of wine (or any other drink). It is best if it is agreed in advance who is providing crackers, pickles and any other extras lest a small group end up with several hundred cream crackers and half a ton of Branston pickle or( none at all). This can make for a great evening of unwinding while feeling just a bit sophisticated.

Canapes and Cocktails
If wine and cheese isn’t pretentious (or maybe potent) enough for you then a night of incredibly small snacks and slightly stronger drinks may be a better option. With so little food being consumed alongside the alcohol in this instance it should probably be an after dinner activity rather than one in lieu of dinner. Get conversation flowing with a little healthy competition over who has brought the most creative canapes or mixes the best cocktail.

Tea (or coffee) and cake
Something a little more sober and maybe appropriate for a quiet morning (if you’re lucky enough to have one). Again everybody brings some food and drink to the table, only this time in the form of their favourite baked confections and hot beverages. This can be an opportunity for tea or coffee aficionados to introduce others to the drinks that they are so passionate about which may or may not (probably not) be a good thing.

Tex-Mex Night
While small, college kitchens do not lend themselves to the preparation  of complicated, 3 course dinners they are generally serviceable when preparing a large batch of chilli con carne or fajitas. These dishes can be cheaply and easily prepared en masse and while they cook, nachos can readily be prepared in a microwave. This makes for a minimum of stress for whoever is in charge of cooking. Just leave everyone to serve themselves once the cooking is done.

Potluck Dinner
Rather than a group trying to cook together or a single host cooking for a large group, it can often ease the pressure when everybody brings a single dish. How much detail people are given on what to bring is entirely up to you and giving no indication at all can have hilarious consequences such as ending up with 3 starters, 4 identical desserts, and no main course. While this may be entertaining the novelty is likely to wear off rather quickly so it is probably best to assign starters, mains, sides, desserts, and drinks randomly and remind attendees of any dietary requirements that they may have to consider.