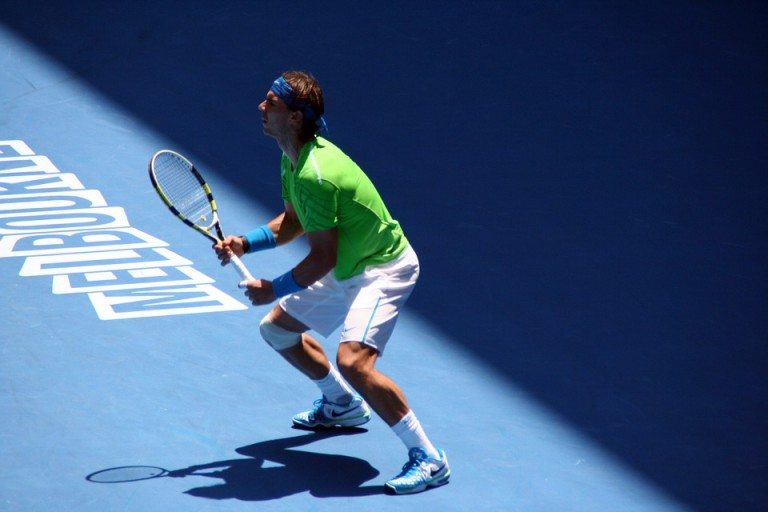 Novak Djokovic continues to dominate – but could the Djoker fall?

2015 was a blockbuster year for the current Goliath of men’s professional tennis, Novak Djokovic. His dominance beggared belief, with a haul of titles and a win-loss record eclipsing even his legendary 2011 season. It was a season with a mere 6 losses, 1 to Ivo Karlovic (in Doha), 3 to Federer (Cincinnati F, Dubai F, WTF RR) 1 to Murray (Montreal F), and 1 to Wawrinka (French Open F).

That last loss was one of the most painful of his career: after a three-set obliteration of Nadal, the man who had held him off for three years straight, and seemed to be the only obstacle at Roland Garros, Djokovic was yet again denied the opportunity to stake his claim definitively among the all-time greats and show that he is. But Djokovic rebounded from that disappointment and blazed a fiery trail through his possible challengers for the rest of the year. The only thorn in his side was Federer, and even then only in 3-set matches – Federer no longer has the physical resilience to outlast Djokovic, as the Wimbledon and US Open finals showed.

Djokovic is still tried and tested every once in a while, by a phenomenal performance, e.g. the sizzling five-setters against Kevin Anderson at Wimbledon and Gilles Simon in the 4R at this tournament. But he consistently comes up trumps even when he’s tested – his psychological strength and determination conquer all so reliably that it’s almost predictable.

Verdict: everything that come up must come down – Djokovic’s predominance cannot last forever. But it will last for this Australian Open – Djokovic will secure his 6th, equalling Roy Emerson’s tally.  It won’t be until 2017 that we see a convincing challenger to finally end the epoch of Nole.

Rafael Nadal has failed to reassert himself

Rafael Nadal’s 2015 was a mirror image of Djokovic’s. Where Djokovic climbed higher and higher, Nadal kept stumbling and falling. He failed to win either a Grand Slam (his closest being at the QFs of the Aussie and the French Opens) or a Masters 1000 (his closest being the Madrid final, which he lost to Andy Murray, itself cause for concern…); he lost to Roger Federer for the first time since 2012. So it was not a huge surprise when he was toppled in the first round this year by fellow Spaniard Fernando Verdasco, avenging the similar blockbuster five-set battle of the 2009 SFs, where Nadal prevailed.  It’s only the second time Nadal has ever gone out in the first round of a Grand Slam – but then again, he was up against an inspired veteran, who has challenged him in his prime, and he did take it to a spirited five sets.

I’m loath to follow the naysayers and preach that the era of Nadal is definitively over, and that he is now clinging on to his former glory, but the fact is that Nadal himself seems baffled and frustrated by what is happening now, as he did last year. Previously, there have always been excuses – knee injuries or tendonitis for the most part, as for his loss to Lukas Rosol at Wimbledon 2012. But now Nadal is openly avowing that he isn’t injured – he’s really happy with what is happening in training, and with how he’s playing, but the opposition are just proving too strong for him.

Verdict: by 2017, Nadal will be even more of a shadow of his former self, possibly even dropping out or the top 10.

Roger Federer has become so dizzyingly iconic in the world of tennis that it has become almost unfashionably predictable to be fond of the man. Many people you talk to now will say he’s smug, or slimy, or whatever. Indeed, sometimes I’ve been taken in by it – there’s a smoothness, a preternatural self-control and poise about the man that may make us feel a little ill at ease sometimes.

But the fact is that Federer is a unique sort of athletic genius. David Foster Wallace wrote a piece back in 2006 for The New York Times, called ‘Roger Federer as Religious Experience’, hymning the unique qualities of the man as an athlete, calling him the champion of ‘power and aggression made vulnerable to beauty.’ It now looks almost prophetic, as while Federer’s physical capabilities are slowly waning, his skill is unabated, as he dares the most breathtaking shot combinations and strategies, as with his SABR (sneak attack by Roger) tactic last year. His longevity is a testament to the harmonious perfection of his game, the streamlined precision which allows him to play without forcing his body to undergo the strenuous physicality the other players rely on.

Verdict: Federer will never regain the world no. 1; he will probably never win another Slam. But that doesn’t matter. I could see him staying in the top 10 until he’s 40…

Before Federer and Nadal exploded into the professional tennis world, Hewitt, together with Andy Roddick, was the one to watch. He was ferocious, precocious, and unbelievably quick; with his Wimbledon win in 2002, he became the youngest ever world no.1, aged 20. Now, at the grand old age of 34, he’s retiring from the sport. Although his dominance was already petering out by ~ 2006, Hewitt sustained his career in a different way to Federer, remaining a tooth-and-nails fighter to the very end, achieving many an upset from his veteran ferocity. He was a hero of the game, and he will be missed.

Nick Kyrgios burst onto the scene in 2014, with a spectacular 4th-round demolition of Rafael Nadal at Wimbledon, after which he lost out to Milos Raonic in the Quarterfinals. It was a dazzling performance from a virtuoso 19-year-old – he let loose a barrage of whip-crack serves and cannonball forehands, totally dismantling Nadal’s defences. Since then, Kyrgios has churned out some very strong performances, and never ceases to remind us of his talent, but his failure to conquer the psychological side of the game has led to some disappointing results, and also some disappointing behaviour.

Indeed, scandal has become Kyrgios’ middle name, whether from the accusations of tanking against Richard Gasquet at Wimbledon last year, or from his jeering remarks towards Wawrinka – ‘Kokkinakis banged your girlfriend, mate’. The story was no different at this year’s Aussie Open, with Kyrgios smashing his racquet and shouting at the umpire in a topsy-turvy loss to Czech Tomas Berdych. It was strange, because he was alternately playing to the crowd and alienating them – it was eerily reminiscent of Bernard Tomic… Having said all this, he’s still only 20 years old, and there is definitely time to change – after all, even the now-graceful and composed Federer was known to act up in his youth. We can only hope that Kyrgios doesn’t squander his prodigious talent and follow the Tomic template.