It’s impossible to quite describe what happens in Off the Page Production’s The Marriage of Kim K. Every time you think you’ve worked out exactly what the plot is something else in one of the interlocking stories taking place on stage throws you again.

The play opens with Kim Kardashian herself (played beautifully well by Gabriella Noble) and her new husband starring in another episode of Keeping up with the Kardashians. The plot then shifts focus to Beth (Amelia Gabriel) and Mo (John Paul), a married couple who spend the first half arguing over whether to watch Kardashians or The Marriage of Figaro on TV – both of which the audience get to see extracts from. It took a while for Gabriel and Paul to warm up to each other, made harder by the fact most of their conversations at the beginning of the show were one-sided, but by the time they made it to the end of the first half they seemed convincingly in love. Towards the end of the first half, all three couples abandon their separate spaces on the stage and tear the set away, revealing a blank ‘shopping centre’ underneath that they then inhabit and interact in for the second half.

It isn’t rare to see opera in Oxford, but it is rare to see one that achieves something as exciting as this one. Leo Mercer (leoemercer) and Clem Faux’s writing works incredibly well conceptually, and although there are quite a few moments of confusion their achievement is still staggering. Sadly a lot of the plot gets lost when there are multiple conversations happening at once, making it impossible to follow everyone. The character of Figaro, a vlogger who tracks and works for all the rest of the characters involved, is left unexplained until the second half, and even then you can be left uncertain who he is. What does come through though, is a clever and witty story.

James Quilligan’s Kris Humphries and Jono Hobbs’ Count make a surprising and funny double act, offset by the genuineness of Ell Potter’s Countess. The vocals themselves are incredible throughout the whole play, and the script even acknowledges the confusion of opera itself; at one moment there was an almost audible sigh of relief when Beth ‘turned on the subtitles’, and the Italian opera began to be sung in English. The orchestra were equally impressive, and although there were some slight issues in sound balance these felt minor.

One of the most consistently impressive aspects of the production was the lighting and set. Harriet Bourhill’s bold set would be impressive already, dividing the O’Reilly’s stage into four sections for the different characters to inhabit, but then towards the end of the first half it is completely peeled away. I’m still not quite sure what the point of the completely blank stage is – breaking the barriers between the different worlds of the story? – but the fact that Bourhill’s set was able to do this is a commendable feat. The only slight issue here was that the drapes, making up the backdrop before the actors tear them away, didn’t leave enough of an entrance onto the stage, one falling at the beginning of the show. It is on the blank canvas of the second half’s stark set that Alex Newton’s lighting design shines. With very little else to change the mood, it perfectly compliments, without ever completely distracting from, the second half of the action.

Although The Marriage of Kim K was in some ways spectacular, it never seemed quite certain what exactly it was trying to say. When it went well, it was amazing: Figaro’s (Jack Trzcinski) solo ‘Superficial’ in particular was an earnest touching piece, staged and lit in a perfect combination of simple and complex. Moments like this showed the great potential that The Marriage of Kim K has, and there was clearly significant talent in every aspect of the piece, but there were also a few moments that didn’t quite work. Despite this though, Kim K remains one of the most exciting pieces of new writing seen in Oxford in a long time. 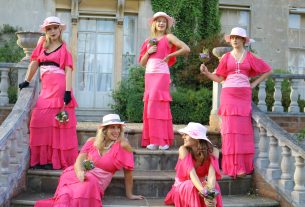 You know what we’ve read this summer? A Thousand Splendid Suns by Khaled Hosseini