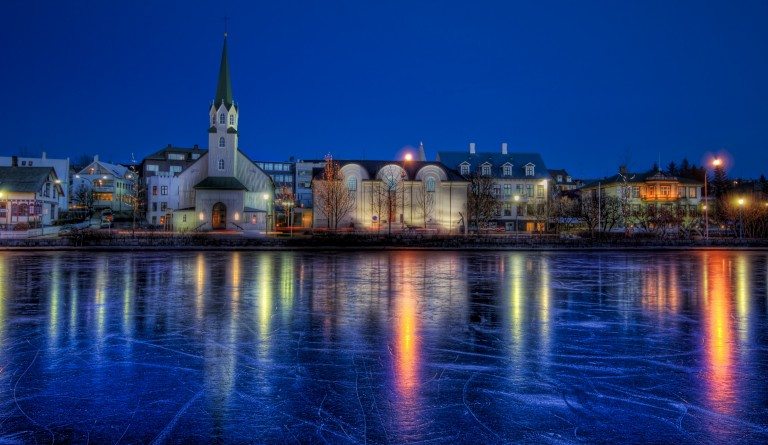 Iceland: thoughts from the land of dreaming geysers

For most of us, Iceland is on the fringes of our international consciousness: it’s a geopolitical irrelevance, which basically has nice fishing, pretty geysers, and maybe some Vikings. We’d almost forgotten about its existence until the unpronounceable volcano (watching beleaguered reporters try to pronounce ‘Eyjafjallajokull’ still has me in stitches every time) struck and buggered up our holidays. But when I went to Iceland last summer, I gained some understanding of the almost preternatural fascination of this sparsely populated, freezing, godforsaken island.

Iceland, like Norway, is mostly renowned for its stunning natural landscapes, and I had imagined it as such, as a land of natural beauty with little urban and cultural development. But when we arrived in Reykjavik, I was blown away. Fresh off the plane, we set out in sought of fuel, and came to an attractive restaurant by the harbour, called ‘Icelandic Fish and Chips’. Unassuming name and evident pandering to tourists aside, this restaurant put any fish-and-chippery I have ever sampled in the UK to shame. They have made a sort of alchemy of the dish, combining the absolute freshest fish (a choice changing every day, but including cod, haddock, ling, red fish and plaice) with a choice of salad (green, mango, orange, or Greek) and your choice of ‘skyronnaise’ sauce (sauce based on Icelandic skyr, pronounced ‘skeer’, like a milder form of Greek yoghurt) – varieties include honey and mustard, truffle, and basil and garlic. Our experience here set the tone for the next few days – Reykjavik, petite though it may be, is a haven of culinary excellence.

No less, indeed, is it a haven of cultural activity. As we explored the city over the first few days, we found a number of gems. In the Rekyjavik Art Museum, I discovered the work of Johannes Kjarval, one of Iceland’s three ‘national’ artists – his paintings include glittering, jaggedly pointillist visions of the rocky Icelandic landscape, together with brooding, unflinchingly dark portraits and self-portraits. Elsewhere, I was faced with the genius of Erro, the enfant terrible of Icelandic pop art, a dizzyingly prolific artist, with a very varied oeuvre – his works resemble some kind of deranged technicolour love-child of Hieronymus Bosch and Andy Warhol.

Besides these two titans of Icelandic art, we popped in to an Icelandic modern art gallery, and were confronted there by an assortment of things as baffling and provocative as one would hope, including a large drapery made from the combination of several braided Viking beards (perhaps some sort of oblique musing on Iceland’s history?), a pile of boxes in a corner, a woman with a dress segueing into an open tent, attached to puppet-strings, and a photo of a woman pissing on the pavement. The bizarre but wonderful graffiti splashed all across the city also testified to the vibrancy of its cultural life, including one graffito of a deformed hand-tree clutching what looked like a globe of the cosmos, with a keyhole in its base, and countless other iconographical details that would put the most elaborate historical art to shame.

On our first day out of Reykjavik, we journeyed to Thingvellir (‘parliament plains’), the site of a great wall where the first Icelandic parliament, the Althing, was held. This assembly was founded way back in 930 AD, and it kept meeting there until 1799; the Icelandic national assembly in Reykjavik retains its name and spirit – it is as such one of the oldest legislative assemblies in the world. Although I did not feel overly taken in by the rather OTT and patriotic claims the info boards wanted to make about the Althing and the birth of democracy in Europe, there is something truly awe-inspiring about the place.

Such awareness of and kinship with their history seems to permeate the country, perhaps in part because it’s so small. When we returned to Reykjavik, we went to a brilliant underground exhibition, which vividly models how the city of Reykjavik was built up from the earliest Viking settlements. Icelandic history in general is fascinating, especially because of the cultural ferment it seems to have enjoyed for much of the Viking period: most of the infamous ‘sagas’ were written by Icelandic poets, e.g. the Eddas by the great Snorri Sturluson; the cultural primacy of Iceland has endured, in a way, in their language, which, only gently buffeted by the linguistic winds, has remained quite similar to Old Norse – although it is still spoken, it is today to the Scandinavian languages rather as Latin and Classical Greek are to Italian and Modern Greek.

Though I was certainly overwhelmed by the artistic, cultural, and historical fascinations of this mysterious country, none of it quite prepared me for the landscape, hyped-up though it may have been. Continuing our Golden Circle route from Thingvellir, we came to Gullfoss, a vast, tiered waterfall, which truly takes the breath away, with its thick, seething walls of white foam; we hiked up to Glymur, the 2nd tallest waterfall in Iceland, stunning in its sheerness, which our tour guide linked up to some strange Gandalf-vs-Balrog-esque Icelandic myth; and at last we came to the geysers in the Haukadalur valley, including the geyser for which all geysers are named, Geysir. Geysir unfortunately goes through long periods of dormancy, as it was when we were there, but its smaller sister Strokkur puts on an unfailing display, erupting about every seven minutes. When it does erupt, the sight is unforgettable: it swells up like a bubble or a blister, and pops into a hot, sulphur-smelling spray, before seeping back into the hole for its next outing. There were boards explaining the (quite interesting) physics of this, but most of us were too entranced by the visual experience to really care… It really is impossible to see the Icelandic landscape and come away untouched by it.

Iceland is a many-sided beast: besides the aspects I have mentioned so far, there is also the mysterious, fey, and sometimes just plain weird side of the country. It is perennially associated with fairies and trolls; indeed, outsiders will constantly claim that very high percentages of Icelanders believe in fairies – evidently a claim locals to which locals do not respond well, as I read one rather frustrated article in a local paper tackling this misconception head on. Nevertheless, the mythologies of fairy and troll are alive in the public consciousness, even if in jest.

Veering more to the weird end of the spectrum, on the last day we were there, we visited the Iceland ‘phallological’ museum. Yes, exactly what it sounds like. And in case you’re wondering, no, it wasn’t just a museum of cultural and artistic responses to the male member, although those were, in a sense, there (including visions of beatle-penises and a superhero-penis) – this was a museum dedicated to collecting and cataloguing the penises of every animal on earth, founded by chronic penis-enthusiast Sigurður Hjartarson, a retired teacher, in 1997. It’s a weird experience, standing there surrounded by misshapen fleshy appendages, either floating in cylinders of formaldehyde or dehydrated and mounted on the wall. But you have to give it to them – not only have they been fairly successful in their efforts to complete the penis-dex, as it were, they have also created a unique museum experience, which goes above and beyond the sex museums in Amsterdam and New York.

One final reflection on the strangeness of Iceland came when we discovered a peculiarity of the Icelandic version of Tinder. The app, it transpires, has a feature for checking if you’re related to the person you’ve matched with, cross-referencing it with a genealogical database (Iceland is small enough, ~300,000, for this to be feasible): Icelanders can’t necessarily tell, because surnames are in the form ‘father’s name’-son or ‘father’s name’-dottir – e.g. Bjork is called Bjork Gudmundsdottir, because her dad’s name is Gudmundur. In other words, relationships in Iceland are a sort of lottery of incest… But I’m sure with the new Tinder app everything is changing.

Hopefully, I have dispelled some of the standard view, though I have probably added some of my own misconceptions. As I think about my time there, I keep coming back to the endearing and manifold strangeness of the place, a strangeness I feel reflected in the explosive imagination of its artistic and cultural output, from the pop art extravaganzas of Erro and coruscating landscapes of Kjarval through the musical experimentation of Bjork and the soaring post-rock of Sigur Ros. As a parting shot, I recommend the whimsical and sardonic cartoonist Hugleikur Dagsson, the man responsible for the ‘anarchy in the UK’ cartoon, but also such masterpieces as ‘robopope vs cloud sharks’, ‘beekeepers vs orcas’, and two cartoons of the devil ensnaring us hapless mortals, entitled ‘election’ and ‘facebook’. I came to Iceland thinking that it was more or less just fishing and tourism – I left knowing that it is so, so much more than that.