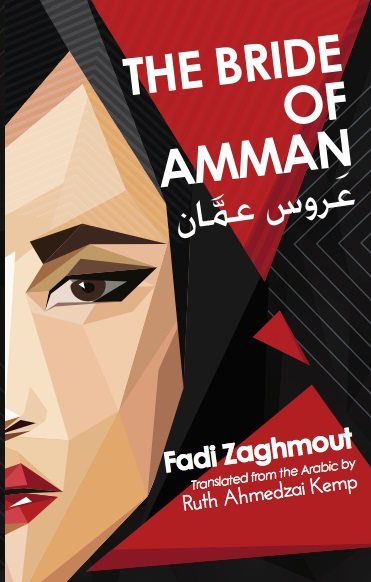 The Bride of Amman – Gender and Sexuality in the Arab World

In 2012, the Jordanian novelist and activist Fadi Zaghmout published his first novel, The Bride of Amman, dealing with the brutality of gender and sexual norms and conventions within the city of Amman. A best-seller, and only translated into English last summer, The Bride of Amman is a short and compelling read, interweaving five different perspectives throughout the book – those of Salma, deemed an eternal spinster by her family, and therefore as a source of shame, of Leila, Salma’s sister, who in Jordanian society’s eyes leads the perfect life, of Ali, secretly homosexual, Hayat, victim of incest, and Rana, a Christian girl who falls for a Muslim. Despite the bleakness and violence prevalent within the book as the characters struggle to battle prejudice and oppression, The Bride of Amman is paradoxically an uplifting novel with its resilient characters, and ends on a hopeful note with what seems to be two happy marriages. Although primarily written for a Jordanian audience,  the feminist and LGBTQ issues that Fadi Zaghmout openly discusses are still relevant in our Western world today – albeit to another level – and Ali’s reflection on double standards with regard to male/female sexual liaisons as well as transgender experience in prison strikes a chord. I was lucky enough to interview Fadi about his book and the questions I had when reading:

How difficult was it for The Bride of Amman to be published in Arabic on such a controversial topic?

Surprisingly it wasn’t that difficult for me to get it published. It was my first book, and I wasn’t know as a writer before I published it. I approached a local Jordanian publisher based on a friend’s advise and then I called the publisher a week later. It was a new publishing house at the time and he said that he wrote that story and is interested in publishing it. We were worried that it may not pass the censorship but then did with no trouble. My publisher said that if they banned it, then it would be the best thing to happen for the book in terms of publicity!

Were you surprised that your book came out as a bestseller?

I didn’t really know what to expect back then. I knew that I am talking about issues that are not usually tackled in the traditional media or in arabic literature in the same manner, but I didn’t anticipate this strong people’s reaction. I am happy that people loved it and welcomed it in open arms and became eager to ask others to read it too.

Did you have a foreign audience in mind when writing your book? I feel like many of the themes you touch upon are still relevant in the West, albeit to a lesser extent, and the obsession with marriage is very much present in Russian culture as well.

I actually wrote it mainly for a Jordanian audience but I knew that same issue are prevalent in the Arab world. I would say that the issue presented in the book are common in all societies where patriarchy rules. It is a feminist voice that tries to highlight how gender inequality and agents of patriarchy makes the lives of everyone harder.

Was there a triggering factor/event which led you to write the novel, or is it the fruit of many observations which you let “marinate”, so to speak?

Before the book, I have been blogging about these issues since 2006. That was the reason I started to write in the first place. I feel that we have inherited a heavy social heritage that restrict our sexual freedoms and body rights and as a result make life in Jordan which is already facing economical challenges, much harder in social terms as well.

After many years of blogging and writing short stories, I wanted to reach a wider audience. I felt that blogging was limiting at a time and wanted something that crosses the boundaries of traditional media.

How difficult was it for you to write from a female perspective about experiences of assault/social oppression? I find that straight men usually miss the point of female experience of male aggression, and many men who proclaim themselves as “feminists” tend in fact to perpetrate the very anti-feminist ideas that they claim to abhor (i.e. will act outraged about harassment stories but then blame the woman for being seductive when they cheat, which you state yourself in the novel “it was a culture where the woman who was blamed for any kind of sexual liaison outside of marriage…”)…The same could and is said about LGBTQ experience. Were you aware of this while writing your story?

Yes I was aware of that for sure. The inequality of acceptance of women and men sexuality in the arab world is outrageous. It is comical and unjust and need to be addressed! Arab women are conditioned to hide their sexual needs and shy from admitting them while on the other hand Arab men are encouraged to taunt it and be proud of it!

For me, I don’t see any difference between the psychology of men and women, I think human beings have same mental apparatus and that differences between individuals are larger than those making the limits of the sex. I also understand the gender conditioning for both men and women and understand how a human being would react and behave under these circumstances.

I find the transgender character’s story, Tamer, both arresting and haunting – why not have given made him into a proper character with his own voice, like Ali, Leila, Hayat, Salma and Rana?

That is a good suggestion which I haven’t thought of before. When I started writing the book, I wanted to show different representations of characters who struggle to get married because of the many boundaries impose onto such reunion. I thought of an LGBT representation and thus had Ali as a main character. In the initial thinking of the book, Tamer came as a sub/supporting character. He was meant to show the contrast of people’s perception of masculinity and femininity. How Ali can hide his homosexuality just because he is masculine while Tamer would suffer just because he acts feminine in public!

What made you want to write out a multiplicity of perspectives, as opposed to one voice where others intertwine (like Ali for example mentioning Tamer)?

I wanted to give each character her/his own voice. I thought that would be a better way to explain their real emotions and suffering rather than having someone else explaining or showing that.

Who are your favorite Arabic writers? i see that on your blog (https://thearabobserver.wordpress.com/) you interviewed Mutasem Subeih and Fadia Faqir. Are there any others?

My favorite Arabic writer is Nawal Al Sadawi. She has been inspiring me since my college time and helped in shaping the way I think. I also like Alaa Al Aswani since his famous book “Yacoubian Building”.