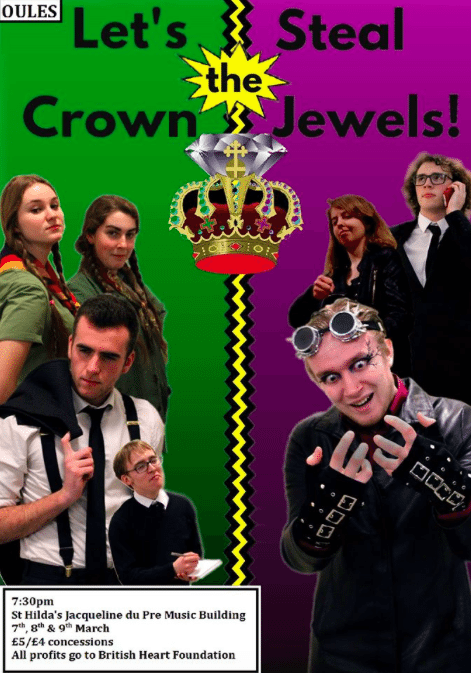 If I were to describe this play in one word it would be spectacular. Not necessarily in terms of budget – this is an amateur production through and through – nor even in terms of overall quality. But when it comes to cramming as much stuff onto the stage as possible, this play is the most spectacular play Oxford’s seen all term. Boisterous, energetic and earnestly charming, the Light Entertainment Society have delivered its termly ritual with aplomb.

The plot, as is often the way with these things, is ludicrously complex, yet not actually that important. The story of a routine security job slowly spirals out into a multi-layered epic involving the various groups interested in stealing, or protecting the titular jewels, (including but not limited to Sherlock Holmes, a London street gang, a hardboiled detective, and a small Scout troupe looking to earn their Heist Badge). The play displays an infectious glee in playing these groups off each other, and the whole thing brims with a sense of wilful excess that’s hard not to like.

Despite the overabundance of things going on, this is still very much an amateur production, and it shows. The large cast, while entertaining, also feels incredibly unwieldy. The script tries to get around this by giving all the individual factions clearly demarcated scenes, but that just makes things feel episodic and disjointed. The dialogue is generally quite good, but many of the actors struggle with their comic timing, or have muffled delivery. The whole thing feels in need of a trim; at two and a half hours this is incredibly lengthy, and the humour might have felt sharper with a shorter running time.

But all of that feels terribly unfair. For one thing, this is a charity play, and it feels churlish to fault it for that. Moreover, it ignores the play’s many legitimate strengths; as flabby as the script is, it does a number of intelligent things with visual humour and prop comedy, and a few of its ideas are downright inspired. The evil Scout troupe is gloriously perverse, and the banter between Sherlock and Watson feels almost Moffatesque. Moreover, many of the performances are surprisingly good; James Carter is delightfully hammy as supervillain Doctor Diabolical, and James Bruce owns the stage as rugged private eye Flick Ranger. The rest of the cast are overwhelmingly solid, and their enthusiasm is palpable.

At the end of the day, this is not a play to take too seriously. It’s best enjoyed after a few rounds in the college bar, as a social experience as much as a dramatic one. Flawed as it is, its heart is in the right place, and it’s deceptively clever in its presentation. Let’s Steal the Crown Jewels has a sense of charm and personality that you just won’t find in the latest O’Reilly spectacle or BT Studio pretension-fest, and for that alone it’s worth a watch.