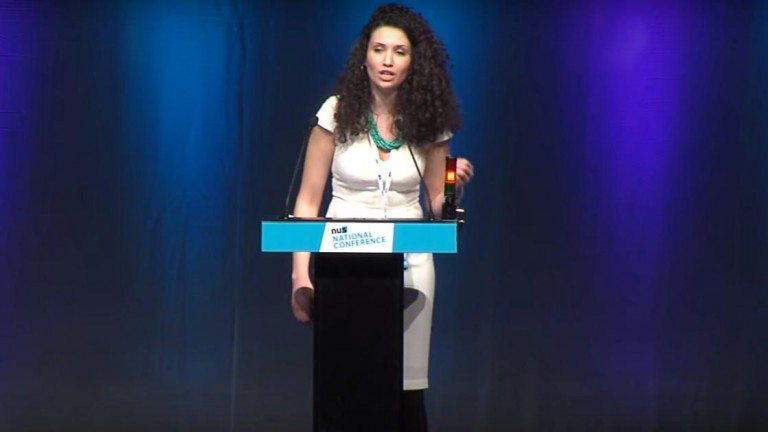 Malia Bouattia has been elected President of the National Union of Students by delegates at their Brighton Conference. She secured 372 votes, beating Megan Dunn by a margin of 44.

Bouattia, who will be the first black Muslim President of the NUS, promised to “put liberation at the heart of our work”. In particular, she drew attention to the effects of cuts to maintenance grants, the black attainment gap and the latest Prevent counter-extremism legislation. She said “the number of voices and groups being silenced by this government grows by day”.

Bouattia promised to “put liberation at the heart of our work”

However, the election has received a mixed response. In particular, commentators have drawn attention to her opinions on Palestine. In 2011, she described Birmingham University as “something of a Zionist outpost” in a blog post she co-wrote for the Friends of Palestine campaign. As Black Students Officer at the NUS in 2014, she also rejected a motion condemning terrorist attacks carried out by Islamic State, but later supported one condemning “the politics and methods of ISIS”.

When the 2011 article surfaced recently, protestors along with members and leaders of several university Jewish societies published an open letter asking her “Why do you see a large Jewish society as a problem?” Bouattia replied: “it seems I have been misrepresented. I am extremely uncomfortable with insinuations of anti-Semitism. I want to be clear that for me to take issue with Zionist politics is not me taking issue with being Jewish”.

In 2011, she described Birmingham University as “something of a Zionist outpost” in a blog post she co-wrote for the Friends of Palestine campaign.

Bouattia made a statement to Jewish students last week, saying “I am deeply concerned that my faith and political views are being misconstrued and used as an opportunity to falsely accuse me of anti-Semitism, despite my work and dedication to liberation, equality and inclusion saying otherwise.”

However, Oxford University Student Union President Becky Howe and five of her Vice-Presidents announced on Tuesday that they would not support Bouattia’s election. She said that they “do not believe that the response was adequate”. Howe, along with Alasdair Lennon, Nick Cooper, Cat Jones, Lucy Delaney and Emily Silcock signed the letter. It concluded: “as a sabbatical team we have decided that Becky Howe (as OUSU President, the leader of our delegation to NUS National Conference) will not vote for Malia Bouattia.”

The Oxford NUS delegates have released a statement responding to the election result:

“Your Oh Well, Alright Then delegates came into this open-minded – we were elected on a reformist platform for improving the NUS from within.

We did achieve some good. We are proud that we managed to pass the motions that we proposed on mental health and tackling anti-Semitism, and members of our team regularly provided the sensible voice in debates that you elected us to be. But we were also disappointed that the stereotypes about the NUS turned out to be true. Whether it was the endless procedural motions, the passage of a motion to ban Yik Yak, the speech of an NEC member mocking the idea that the NUS should represent all students, or even the horrifying spectacle of people opposing the commemoration of the Holocaust, we were dismayed to be confronted with a mixture of absurdity and self-importance.

Most disheartening, however, were the results of the elections, which clearly showed an NUS out of step with the views of ordinary students, and profoundly closed to the kinds of reforms we want to see – in particular, the election of Malia Bouattia,”

“Today, we no longer believe that Oxford’s membership of the NUS can be justified. The point of a union for students is to deliver real representation for all students, and what has occurred this conference shows that this is no longer a priority for those who hold power in the NUS.

We therefore announce our intention to seek a referendum to disaffiliate from the NUS.

We therefore announce our intention to seek a referendum to disaffiliate from the NUS. We will need the support of as many students as possible – if you agree with us, please get involved with our campaign by messaging us either on the page, or individually. “

In the coming weeks there are likely to be a number of JCR and MCR motions calling for students to support the stance of the ‘Oh well alright then slate’ in the hope that a motion can be passed to trigger a referendum on OUSU’s affiliation to the NUS.

A referendum held in 2014 saw students narrowly vote to disaffiliate from the NUS but accusations of vote rigging saw the result nullified.