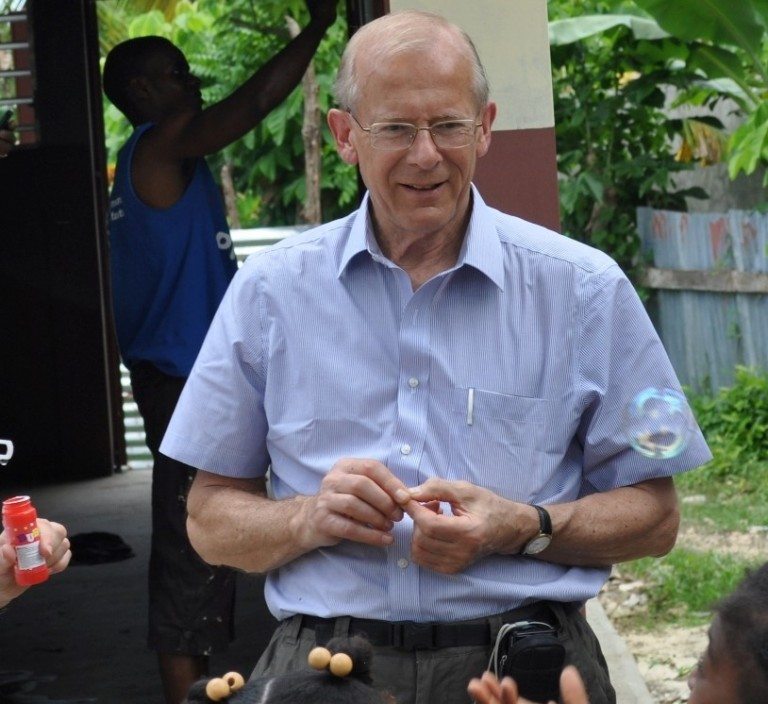 Sustainable development – none of your business? An interview with Clive Mather

Clive Mather has his fingers in many pies. Unfortunately, when I visited him to carry out an interview, there wasn’t any pie, but he did offer me some rather nice biscotti instead. Working in every continent except Antarctica, with roles such as CEO of the oil company, Shell Canada, Chairman of Tearfund, an international Christian relief and development agency, and Chairman of the Iogen Corporation, a biotechnology company developing renewable fuel sources, has given him a range of insights into business and charity.

While the spring drizzle became an April power shower outside, I asked Mather, a Lincoln College alumnus, about his experience of work around the world. ‘I left Oxford in ’69, when the world was just opening up,’ he describes. ‘I went to California following an American girlfriend. From the black and white, post-war UK […] suddenly I’d seen this glorious technicolour in California. The travel bug bit me, and I’ve been travelling ever since’. From a first placement with Royal Dutch Shell in Brunei, he went to Gabon, in West Africa, when his youngest daughter was just six weeks old. ‘Sometimes life on these assignments is very difficult,’ Mather tells me, ‘particularly when the electricity doesn’t work, water is random and food is a challenge’. Nevertheless, the greatest benefits of working abroad are, according to Mather, ‘a richness of experience […] and a great cultural sensitivity’.

After his career had led to three years as the CEO of Shell Canada, Mather returned to the UK in 2007 to take up the position of Chairman at Tearfund.  I was curious about the similarities between the two organisations, particularly with regards to sustainable development, an approach which seeks to address economic, social and environmental issues concurrently. Mather chuckles; ‘that’s a three week question’, he says. ‘If you take Shell and Tearfund, two organisations in which I’m heavily involved, there are strong similarities. Both are very international – Tearfund currently operates in over fifty countries – with great people and a strong focus on values. People might be surprised I say that about Shell, but I only worked for them because I thought they were fantastic in terms of their values […] on the Dutch side they came out of a Reformed Protestant tradition and on the UK side they came out of the Jewish tradition, so they’ve got a very strong Judaeo-Christian value set […] and a huge emphasis on health, safety and environment, and a very strong focus on return on investment. In Tearfund, return on investment is important too, but it’s a different kind of return on investment. We’re hot on impact, effectiveness and measurement […] because we need to make sure that you the donor, who has sacrificially given, is getting value for money. The huge difference, of course, is that the metric by which you measure Shell is basically financial […] whereas Tearfund creates wealth, not measured in money, but in people and transformations’.

Could some kind of partnership be on the table then? Not currently, it appears. ‘The opportunities of interaction between faith-based organisations and business are enormous, [but] it’s slow going,’ Mather remarks. ‘It’s very frustrating that, most of the time, business and faith throw rocks at each other. If you say to business people ‘I’m a Christian’, they think you’re a bit wet, somebody who needs some theological crutch to get them through life’. From the perspective of faith-based organisations, Mather also points out, it seems that ‘every day there’s a story about big business which would make your hair curl’, citing the recent scandal in which BP shareholders rejected a £14 million bonus for their CEO, proposed in a year of record losses and job cuts.

Mather goes on to highlight the differences between faith-based organisations, such as Tearfund, and other non-governmental organisations (NGOs), like Oxfam. The majority of the latter group’s income comes from institutions, like USAID and the UN, and governments, and so their work centres on delivering contracts. Only ‘a small percentage of their income’, according to Mather, ‘comes from supporters who might respond to an appeal’. By contrast, ‘the majority of our [Tearfund’s] money comes from personal supporters and there is relatively little institutional funding. Therefore, we are not driven by scale, reputation, or careers, but by faith. Our motives are different, and I would argue much less susceptible to forces that will […] make you want to be judged by this world, because we are looking towards the next […] We can act with an autonomy and integrity which others can’t’.

There are three major areas of influence for NGOs: disaster response, empowerment and advocacy. Tearfund, among a range of organisations, responds rapidly to humanitarian crises, like the earthquake which struck Nepal in April 2015, killing 8000 people and injuring 21 000 more. In what is termed ‘going operational’, these organisations put people on the ground, providing those in greatest need with food, water, medicine and tents. While he affirms the importance of disaster response, Mather points out that ‘this is expensive aid and it’s unsustainable’, because, simply, ‘there aren’t enough resources’ and, in receiving large quantities of aid, those in need ‘may also develop dependency’. The second area, empowerment, means enabling the poor to help themselves; with ‘some encouragement and expert help’, Mather explains, ‘there is an extraordinary return on investment’, as people form communities which provide networks of mutual support and income generation, in, for example, a collective growing crops together. ‘But the highest return on investment’, Mather continues, ‘is through advocacy’, lobbying government to change laws, or bring in new ones. ‘If you can change public policy at a governmental level’, Mather suggests, ‘you can lift millions of people up, just by changing the ground rules of society’.

The problem which arises, however, is that it is far easier to raise money for disaster response than it is for advocacy. ‘If I show you a picture of a three year old washed up on beach […] as a result of the Syria crisis’, Mather says, ‘your heart breaks – and so does mine’. As of April 16th, British people have donated £27 million to British charities to fund responses to the ongoing crisis in Syria. On the other hand, Mather goes on, it is very difficult to raise ‘money to employ someone to write letters to MPs’, even though this is the way to make the most long-lasting impact on global poverty.

One of my final questions concerns Mather’s role in combating climate change, which he views as among the greatest threats to development. ‘I love business’, he says, ‘and it’s part of every solution. These guys in Canada, using some really interesting biotechnology […] can take straw – cellulose – and convert it into ethanol, which can be spiked into gasoline’. As chairman of this group, the Iogen Corporation, Mather is part of the development and expansion of the use of this renewable transportation fuel.

In the charity sector, which often relies on emotional reactions, it can be hard to put facts on the faces and statistics on the situations. By incorporating the strategies of competitive business into attempts to fight poverty, promote social equality and protect the environment, however, Mather shows not only how effective this approach can be, but how necessary it is.