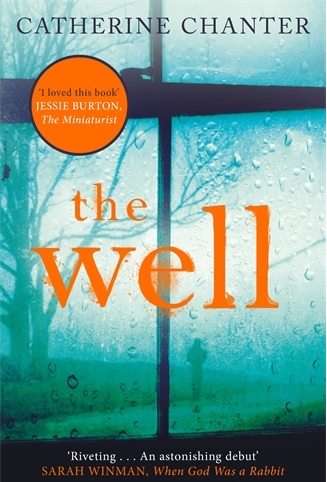 Ruth and her husband Mark leave London after he is accused of watching child porn, hoping to find peace in the country. Instead, they find a miracle: the only spot in rains a future, drought-stricken England. What’s more, this book is approved by Richard and Judy, and who could help but trust those friendly faces? Especially when it’s Buy One Get One For A Pound at WHSmith. I bought this book partly because it was cheaper than a coffee, but also because, as an English literature study currently being forced to trawl my way through sixteenth-century poetry, there is nothing I love more than a quick and easy dystopian novel.

Although I was slightly sceptical of Richard and Judy’s literary tastes, the first 100 pages were promising. There were moments with a distinctly Atwoodian vibe: mysterious female protagonists, environmental disasters, and a fragmented timeline carefully pieced together by an unreliable voice.

The novel definitely has its merits as a psychological study of grief and paranoia, after Ruth’s adorable grandchild is murdered. This would be bad enough in itself, but Ruth isn’t even totally sure she isn’t guilty. She is also suspicious of her husband, inviting questions about how far relationships can be strained and tested by outside factors. This novel is remarkable about tapping into contemporary fears of our society: paedophilia, being accused of paedophilia, environmental catastrophe, rabid feminists.

I was not quite sure how to react to the mad-hippie-feminist cult vibe. The cult felt at times far too caricatured to be truly frightening, a stereotyping of straw feminists who hate men and love flowers. Even the deity (‘the Rose’) sounds like a joke. Perhaps this can be seen as a manifestation of our cultural anxieties towards any extreme religion; but its execution was poor, more ridiculous than unsettling. If Chanter was trying to make a point about religion, I’m not quite sure what it was, other than the obvious: don’t let a crazy cult convince you to neglect your children and then accidentally end up killing him.

I did enjoy the novel, which is truly suspenseful as we edge towards the murder. Even if the answer is disarmingly obvious, I didn’t really mind because the book was nearly over. The plot is dragged out by Ruth’s house arrest. There is very little for her to do, other than sit around, mope and remember.

Perhaps I have been desensitised by the Hunger Games, but I really did not feel that futuristic England was the ‘Big Brother society’ the blurb promised. It’s true that Ruth has a stressful and rather tedious time during house arrest, but she is under suspicion of killing her grandchild. I can’t help but feel like if the country were faced by an environmental disaster it would be fair enough for the government to put in a few extra restrictions about water use.

The novel is capable of some stunning imagery, but the whole effect is rather hit-and-miss, occasionally blundering into sentences that are full of clichés and feel like they are trying too hard to feel literary: ‘It looked like an olive branch, even if now I see it in my mind’s eyes as a crown of thorns.’ Great juxtaposition, but unfortunately so poetic its contrived and trite. However, the voice on the whole is compelling.

I did enjoy the novel as a whole, but the novel would benefit from being repackaged. As a dystopian novel I found it rather unexciting, but it was a wonderfully rich psychological thriller in its exploration of guilt and trust. As a murder mystery it was compelling, even with its rather bland ending, and its presentation of grief is emotionally-charged and taut. Mark is a remarkable character in his ambiguity; readers are not quite sure how to respond to him, and have to make the decision about whose description to trust. Ruth herself isn’t quite sure how to react, and captures this dilemma beautifully: wanting to know the truth but also being terrified by what this truth will imply, that she has loved a man capable of terrible things, that we can never really know anyone at all.

If I want dystopian thrills, I’ll stick to Divergent and other reliable teen novels where I know lots will happen, the government will be unambiguously horrendous and lots of people will probably die horrible deaths. But as a thoughtful, generally well-written thriller The Well is worth a read – but not a re-read.