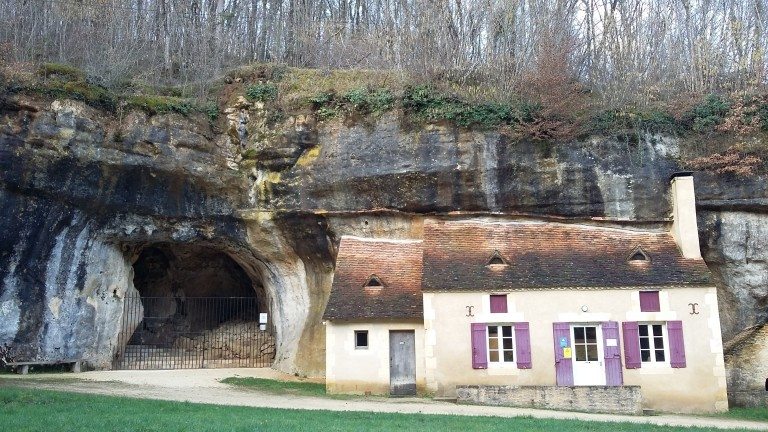 In the Valley of Art

Head out east from Bordeaux deep into the Dordogne and you’ll find a truly extraordinary place. The Vézère Valley is quite pretty, banded by pale cliffs there are any number of charming French villages and playmobil-looking chateaux to enjoy. But this is just the surface, the real beauty is not visible at first sight. This is because the Vézère is peppered with the remains of prehistoric culture. Overall 147 sites honeycomb the valley: caves, shelters, even a citadel carved into the cliff-face. Humanity has embedded itself here the most literal sense possible. All the sites are disarmingly beautiful, but the jewel of the valley has to be Font-de-Gaume.

An unassuming little cave mouth tucked in behind a hill near the village of les-Eyzies, Font-de-Gaume is one of the few places in the world where you can come face to face with original polychrome cave paintings. Only eighty or so people are allowed in the cave each day, and even then you are not allowed to penetrate right to the heart of it. This adds an odd kind of pressure before we even set foot inside the cave.

The guide leads us down, and the sounds of the outside world ebb away. The darkness becomes more absolute, closing in around the guide’s torch, making the walls glitter. Finally he tells the group to stop and bunches us in a tight circle. He shuts off his torch, and for a moment we’re blind. Then the wall in front of us illuminates, and the paintings emerge. Huge red and black bison come bulging out of the rock. Splendidly curved they dominate the Font-de-Gaume alongside reindeer, horses and mammoths. Overall more than 200 paintings festoon the cave. The guide highlights the techniques used to depict these creatures: the use of twisted perspective, the exploitation of the rock surface to create the illusion of depth, but I’m just cowed at the sight of them.

Very few moments in life are genuinely breath-taking. Too often when faced with some masterpiece I’ve felt irritated and vaguely ashamed at my lack of emotional response. Not here. This is the closest my atheistic three-times-too-small heart has ever felt to sacredness. No photograph can capture it, to take a photo would obliterate the shadows, and the shadows are as important as the paint strokes. The artists didn’t just rely on torchlight, they incorporated it into bringing the animals to life. These were no doodles done spontaneously out of boredom, holes in the cave walls bear witness to where the artists carefully constructed scaffolds to execute their art. Words like ‘religious significance’ and ‘shamanism’ sometimes get wheeled out as though they might help illuminate the work, but they are woefully underequipped to grasp the impact of it. In truth what makes this work so fantastic is that it is immune to over-analysis. The centuries of influence and allusion through which we’re used to viewing art fall away, leaving pure effect. Just art.

Despite being ‘discovered’ in 1901, Font-de-Gaume was never really lost. Unlike the more blockbuster caves at Lascaux and Chauvet, which were sealed off for millenia to be rediscovered in the 20th century, Font-de-Gaume always seems to have been popular with the locals. There are signs of medieval habitation around the mouth, and in the 19th century it was used to keep sheep. Local children have left their traces all over the art itself, scratching their initials into paintings older than history. It seems people have always felt comfortable here.

It is impossible to date the paintings in Font de Gaume using radiocarbon analysis, as they are largely made up of iron oxide and manganese. Nevertheless, through a combination of style comparison and geographical Sherlock-Holmesery, researchers place the décor at around 15,000 years old. Meanwhile the engravings in the cave Combarelles (just five minutes down the road) are estimated to be just 13 000 years old, a gulf between artists as wide as the one that separates Jesus Christ and Donald Trump. A giant swathe of human experience survives in these examples of our bloody-minded desire to decorate the darkness. Font de Gaume was only ever inhabited by cave bears, Cro Magnon people never lived there, making it an early example of a designated art space. Combarelles is even more of a testament to our tenacious, almost unhinged determination to draw. The cave floor was so much higher in the Magdalenian era that the artists had to crawl commando style on their bellies through black, airless tunnels clutching their paints, their chisels and their reindeer-fat torches.

It’s heartening to know that as long as humanity has been, we’ve considered art well worth the effort. Even more so that 15 000 years down the line we can still appreciate that effort.