Having not seen Snow White and the Huntsman (2012) – The Huntman’s retrospective sequel – before entering the cinema theatre, I had little notion of what to expect beyond Charlize Theron’s foreboding utterance, ‘If it’s a fairy-tale you’re hoping for, prepare yourself for so much more’ in the film’s trailer.

I unfortunately found myself largely unable to agree with Theron. What the film provided was in fact not one fairy-tale but several haphazardly stitched together; think Frozen characters meets Narnian landscape and you’ve practically surmised the entire plot and development of this film.

Featuring two royal sisters, Freya (Emily Blunt), gifted with the power of freezing whatever and whomever she likes (where have I seen that before…?), and Ravenna, (Charlize Theron) gifted with the power of… well, just being evil really, the film follows Freya’s retreat to a northern kingdom after the traumatic murder of her baby daughter. In her bitterness, she trains up children kidnapped from villages within her domain to be her huntsmen, an army indoctrinated against the ‘sin’ of love.

Enter Eric (Chris Hemsworth) and Sara (Jessica Chastain), two of Freya’s huntsmen, speaking in oft-agonising ‘Scottish’ accents (the only two in the entire film to do so for reasons unknown). Having pledged themselves to each other in rebellion against Freya in what is essentially a natural hot tub, they then embark, together with four dwarves functioning as comic relief, on a mission to find the magic mirror that has fallen out of Snow White’s possession. Once theoretically found, they would lay it to rest in a place called ‘Sanctuary’, safe from the megalomaniacal grasp of Freya, whose acquisition of the powerful mirror would spell certain disaster for everyone.

The storyline is well-worn and offers nothing new, leaving one feeling rather dry. Hemsworth delivers a convincing and warm performance as a huntsman, but one can’t help but feel a little disappointed that Blunt (and Theron) did nothing more than playing into the embittered-woman-wanting-consolatory-power trope. Steely stares, lowered velvety vocalisations, and physical rigidity have characterised countless female villains before; one wonders whether a female parallel to an eccentric like The Joker would bring this rather deadened film genre back to life.

Despite the blatancy of their comic function, I did, however, admittedly enjoy Rob Brydon, Nick Frost, Alexandra Roach and Sheridan Smith’s banter in their dwarfish roles. Though, again, the scriptwriting somewhat let the actors down in terms of stagnant predictability, Smith’s feisty attitude and Brydon’s deliberately heightened Welsh-inflected repartee elicited some much-needed laughs.

If originality is not what this film aims at, at least the action scenes are fairly well executed. Sara as archer and Eric as axe-wielder prove an effective combination, especially at the apotheosis of the film, where towering ice, close-quarters combat, and black magic clash heads, effectively sound-tracked by Halsey’s song ‘Castle’ commissioned specifically for this film. Although the ending does feels curiously constrained – the vast wintry landscape outside being shunned for the main hall of Freya’s palace instead – the audience’s appetite for resolution is somewhat sated, coloured as it is with refreshing bitter-sweetness (no spoilers!).

The Huntsman doesn’t deserve the one star stingily given by Guardian writer Peter Bradshaw. But it doesn’t deserve more than three either. Though it exhibits several engaging performances, ultimately this film won’t be considered cutting-edge any time soon. 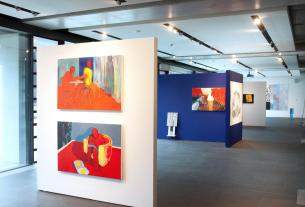 Review of Blue Screen at the Glass Tank

Meek’s Cutoff: fear and loathing in the old West