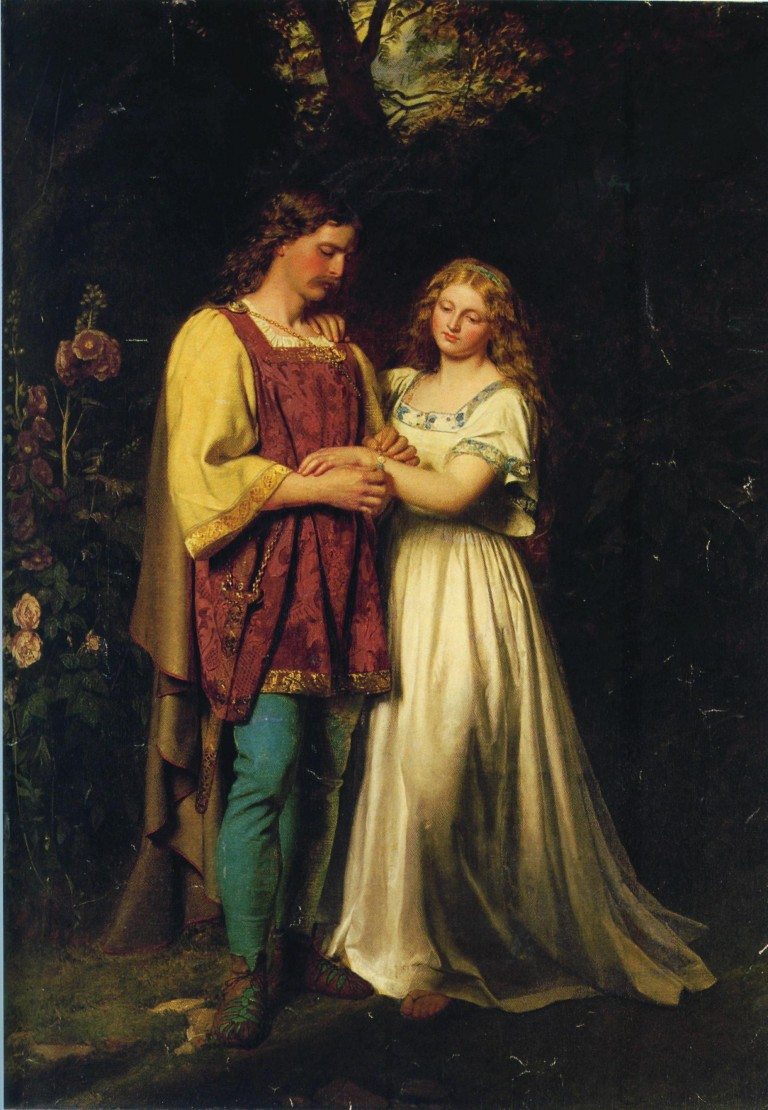 Cymbeline: a comedy with menace

‘Cymbeline’ is one of Shakespeare’s longer plays, consisting of five acts replete with mistaken identity, miscommunication and more witty repartee than one can shake a stick at. The action begins with Imogen, daughter of Cymbeline, the King of Britain, having enraged her father by marrying a commoner named Posthumus, played by the velvety Irish-burred Jonjo O’Neil. The groom is abruptly banished from the court, with a distraught Imogen (performed with great aplomb by Emily Barber) swearing chastity and obedience to her departing husband.

Although the play’s title is Cymbeline, Imogen speaks three times more lines than he does, and is in fact the narrative tie that keeps the entire play together. Imogen, although she is undoubtedly the centre of the play is left without a legitimate voice even in the naming of her own play. Within the action itself, she is again and again the subject of lewd remarks or interrogated about her values. Lines like

‘I should get ground of your fair mistress, make her go back, even to the yielding, had I admittance and opportunity to friend’

‘The cloyed will, That satiate yet unsatisfied desire, that tub /Both fill’d and running, ravening first the lamb/ Longs after for the garbage’

are filled with a kind of quite threat to the lady. Audiences now find it harder to connect to this kind of ‘humour’ (if we’d even call it that today); no matter how good the actors are at making their own lines funny, when the content is so out of context it takes a while for people to warm up to it. As an audience member you feel as though, were those lines not being spoken with such levity and obvious humour they’d be sending a chill up your spine. In many ways the plot of this play would nowadays be more fit to the horror or tragedy genre.

The sexual menace of characters like Clotten or the rakish Italian Iachimo is all too palpable, and all the more evident for their own obliviousness to it. Here are two men of immense power and wealth, both in their turn confounded by a woman who keeps her faith and doesn’t fall prey to their machinations. Cloten is both unerringly simple and yet intimately violent, his vicious spurned passions played to petulant perfection by the Calum Callaghan, his voice almost breaking in its squeaky indignance and lust on lines such as

“I love and hate her: for she’s fair and royal, And that she hath all courtly parts more exquisite…”

Iachimo on the other hand displays such an oily deviance as to make the skin crawl, portrayed with an almost psychopathic charm by Eugene O’Hare. He’s in many ways the comedic counterpart to Othello’s Iago; obsessed with his friend’s lover.

Having spoken at length about the deeper connotations to certain themes in the prose, what must also be noted is the sustained bawdy humour that runs throughout. Whilst academics might coo over a particular rapier-stab of prose, a large sum of the humour of the play stems around the unfortunate invocations of the name ‘Pisanio’, or indeed the bizarre Punch and Judy of Cloten’s amorous advances upon Imogen. The Queen, Cymbeline’s second wife, is played as a Disney style evil-stepmother with relish by Pauline McLynn. There are moments where you feel as though the next line might as well be ‘She’s behind you!!’.

The play is a full ride, full of a myriad different turns and volte-faces. These quick scene changes are almost entirely verbal rather than physical, highlighting the Bard’s careful plays upon words. It is easy to lose yourself in the torrent of prose at first, until your ear adjusts and the action begins to unfold at a more comprehensible rate. The end of the play ties together all these bizarre and extra-ordinary situations in a happy scenario, itself amusingly prolonged and convoluted, which seems the only satisfactory ending for the events that have unfolded.

It is hard to get away from the beauty and wit of Shakespeare’s lines in this play though. When Imogen hears over her husbands’ rejection after rumours of her infidelity have reached her ears, the faithful servant Pisanio murmurs

‘What shall I need to draw my sword? the paper Hath cut her throat already.’

It’s a damning indictment of the furore rumour can whip up, and the deadly consequences that follow. It’s also a real testament to how much, even in a play that has been labelled a comedy, Shakespeare can still masterfully summon up the full breadth of human emotion.

This comedy is one that can’t quite decide if it wants to leave us laughing or weeping.

This reviewer saw a production of CYMBELINE at the Sam Wanamaker Theatre in London.