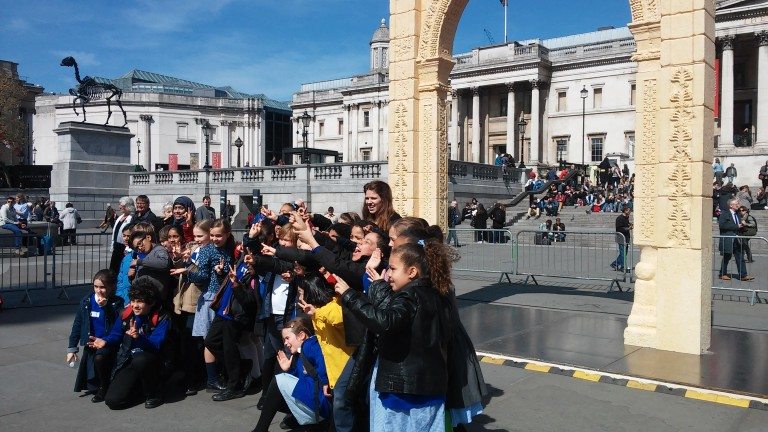 A full-scale replica of Palmyra’s Arch of Triumph was displayed in Trafalgar Square last week. The millennia old monument had been reconstructed using advanced 3D technology and is part of an even bigger education project involving a number of Oxford researchers and Magadalen student volunteers.

The Arch, costing over £200,000 and standing 20ft tall, was commissioned in response to the destruction wreaked by Isis on the original in October 2015. Behind the project is conservation group, the Institute for Digital Archeology (IDA) which aims to photograph and catalog details of ancient sites before they are destroyed or lost. IDA Director, Roger Michael, spoke at the event, describing the complex importance of monuments like the arch. He said: “Monuments – as embodiments of history, religion, art and science – are significant and complex repositories of cultural narratives. No one should consider for one second giving terrorists the power to delete such objects from our collective cultural record.”

Although by far the most visible part of this initiative, this monument also signaled the start of another large-scale project: the Million Images educational programme ‘Gateways’. Set up to promote the study of subjects like classics and ancient history this project ran a number of workshops and initiatives alongside the Trafalgar Square unveiling. Instrumental as a member of the Palmyra Arch technical staff and as an overseer for the ‘Gateways’ programme is Magdalen Access Fellow, Dr Alexy Karenowska. She stressed how cultural artifacts like the Arch are ‘important symbols’ for human relationships and cultural communities. Highlighting both the vital educational and academic potential of such projects she said, ‘[The project] is a great opportunity at many levels – many subjects coming together in different ways’.

It was through Dr Karenowska that students from Magdalen College were involved in implementing the project. Together with Classics for All and Snap Theatre a number of students ran interactive workshops for local school children and set up public stalls around the Arch replica. Magdalen JCR president Sam Serburn was one of the students involved as a volunteer on the day and said “It was remarkable to see the enthusiasm and energy generated by the recreation of the Triumphal Arch of Palmyra in Trafalgar Square”.

“Seeing how engaged these children were with the project was a real joy– I hope the project has impresses and inspired them, and their teachers, as much as it has me!”

Volunteers were also involved with the Storytiles Project, an initiative to create one giant mosaic using contributions from schools around the world. At its center will be a mosaic built by children currently living in Damascus. Robert Menzies-Wilson, another Magdalen volunteer, was directly involved with the Storytiles project. “Our task as students was to tell people about this project along with the arch and the million image database”. He went on to say: “The guys who came down were fantastic, very helpful and incredibly knowledgeable about the subject matter”

The ‘Gateways’ programme will continue to expand its reach and outlook into the future such as through The Trading Places Picture and Poetry projects. In turn Dr Karenowska is keen for Magdalen students to continue to be involved in volunteering with these programmes as part of college outreach.