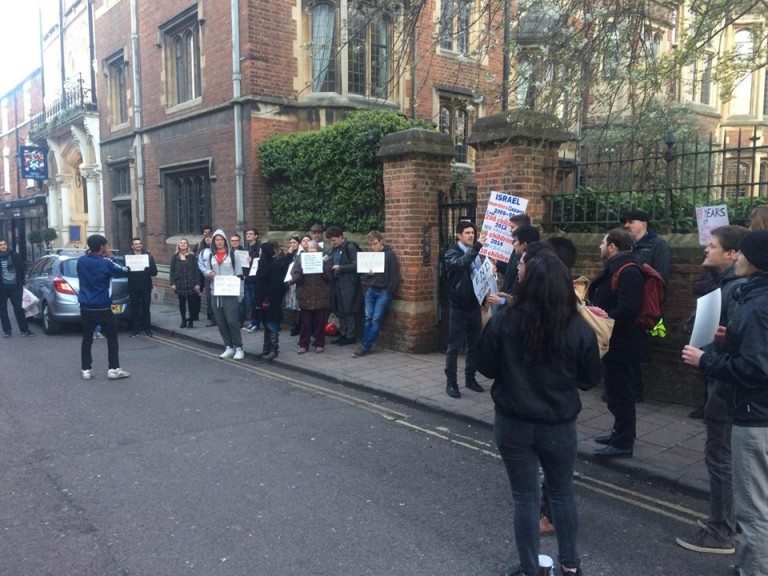 The visit of Mark Regev, the Israeli ambassador to the UK, to the Oxford Union yesterday was met with protests by pro-Palestine activists outside the Union, both from the University and the Oxford Palestine Solidarity Campaign. Regev was giving a talk entitled ‘Middle East Reality Check – The Road to Peace’, primarily discussing the continuing situation of conflict within Israel and the Palestinian territories themselves, as well as wider geopolitical crises, most notably the rise of the ‘Islamic State’ in Syria and Iraq and the developing tension between Sunni Muslim Saudi Arabia and Shi’a Iran.

His visit comes within the broader context of tension across the University surrounding Zionist politics and anti-Semitism, particularly in the wake of the election of Malia Bouattia as NUS President. The protestors numbered about 40 – less than has been seen for protests against Marine Le Pen, for example – but still made a fair amount of noise, with chants ranging from ‘Occupation no more’ and ‘Free Gaza now’, to ‘from the river to the sea, Palestine will be free’; it is unclear exactly which sea, and which river, they meant. They also described Israel as an Apartheid state.

The leader of the protests, a student, declared that the protestors were ‘standing up to the spokesperson of an apartheid state’ and, when asked about how the protest would be seen in the context of Oxford’s current political climate, said that the protestors were continuing a long tradition of pro-Palestine activism and solidarity at the University. Mr Regev asserted his support for a two-state solution during the talk, stating that it was ‘the only road’ to peace, in doing so supporting a more radical approach than the Israeli Prime Minister, Benjamin Netanyahu, and his government.

He also stated that a complex approach was necessary to the multifarious problems in the Middle East, and drew a distinction between criticism of Israel and anti-Semitism; though refused to do the same for the latter and anti-Zionism. The talk was calm and well-received. Mark Regev was born in Australia and moved to Israel at the age of 22. He joined the Israeli ministry of foreign affairs in 1990 serving in ministries in Hong Kong, Beijing and Washington DC. He became Israel’s ambassador to the United Kingdom in 2014. His role as a spokesperson for defence in Israel before taking up his role in London saw him become a figurehead for the Israeli leadership during time of crisis, with his robust defence of his country’s actions courting much controversy.