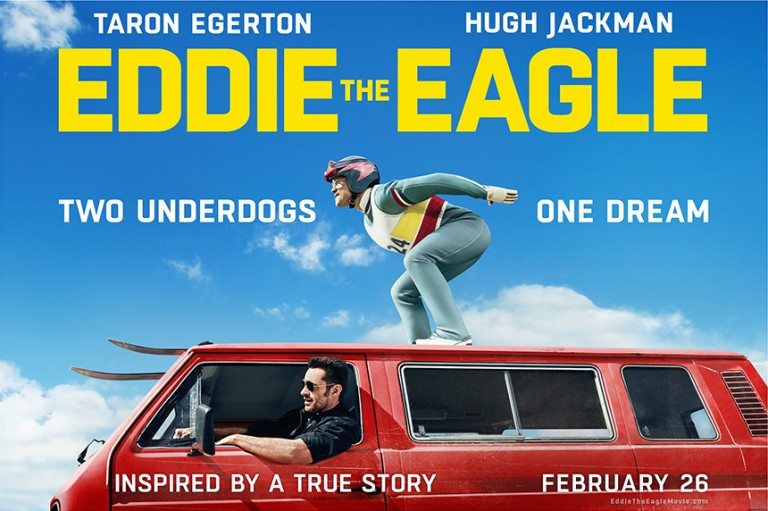 Eddie The Eagle may not have flown in real life, but there are moments when he soars on-screen. Dexter Fletcher’s feel-good romp avoids the saccharine tones which have undermined other takes on the genre, and makes you forget that you actually know the ending. Latent nods to Billy Elliot and Cool Runnings make this a pretty Meta film, or at the very least a film which is aware of the limitations of its genre. We have the underdog protagonist, the washed-up coach, the bullying opponents, and a very ‘British’ sense of achievement.
Eddie Edwards (played by Taron Egerton) is not your usual cinematic lead. Wispy ginger hair, huge glasses and a thick Gloucestershire accent all make Eddie something of an oddball. He’s always dreamed of being an Olympian, shown through a very funny opening montage, but has never caught the right break. If the narrative links to Billy Elliot aren’t enough, then the opening colour palette is equally reminiscent. Eddie’s damaged knee is perhaps his own body’s way of suggesting he isn’t going to be a sporting hero any time soon. But when Eddie spots an incredibly niche sport, he whisks himself away to Germany, where he meets former Winter Olympic ‘great’ Bronson Peary. From here, all roads lead to Calgary, and the 1988 Winter Olympics.
The film revolves around the relationship between Eddie and Peary, and it’s here where the strengths of the picture lie. Fresh from his outstanding turn in the equally outstanding Kingsman, Egerton is affability personified. Here’s an actor who clearly went to town in pursuit of replicating the eccentricities of the real-life Eddie Edwards, but thankfully these eccentricities never become the thrust of the comedy. The audience is never compelled to laugh at Edwards, instead they laugh with him. Edwards is under no allusions of grandeur, he will never be the ‘Flying Finn’, but he might just have enough in him to have his moment in the sun, or snow. On the flip side of the coin we have the entirely fictional Bronson Peary, a man who had greatness in the palm of his hand. In a film as objectively fluffy as this, it’s a credit to Dexter Fletcher that we get anywhere near a serious debate over the merits of winning and taking part.
Hugh Jackman clearly relished this role. His excellent comic timing coming as the perfect foil for his more Wolverine-esque flourishes of gruffness. One visually splendid CG set piece sees a drunk Peary tackle the 90m jump with ease, all at once distinguishing him from the try-hard ethic of Edwards. But it’s the coming together of these demeanours which creates the punchiest moments of the film. The rest of the cast fit the bill perfectly – we have a sneery British Olympic Official, the doubting dad and the proud-as-punch mum, and we even have a voyeuristic nod to a Scandinavian team. These are all pieces in a narrative puzzle which we’ve seen before. However Eddie The Eagle brings them all together with such charm and grace that the final picture is candidly uplifting.