Warning: mysqli_query(): (HY000/1030): Got error 28 from storage engine in /home/oxfordst/public_html/wp-includes/wp-db.php on line 2007
 Dinner over Doctor Who, with Who Soc – The Oxford Student
Skip to content 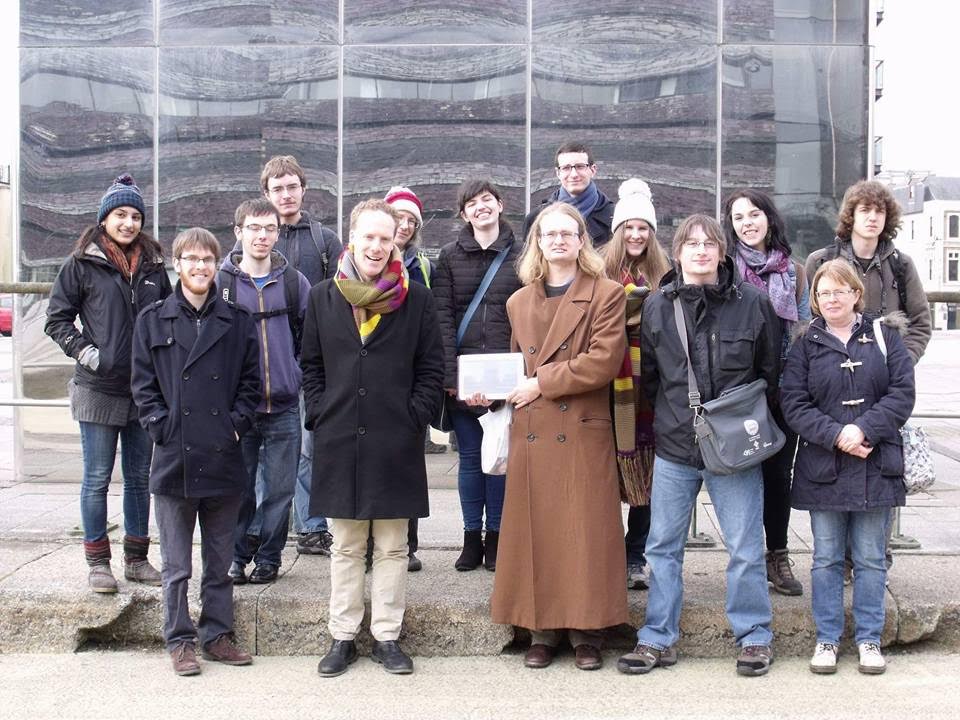 So, there’s this show called Doctor Who. You might have heard of it. It’s good fun. Similarly fun are show’s fans, a number of whom attend Oxford University. The Doctor Who Society (WhoSoc for short) organise weekly meetings involving TV-watching, geek quizzes, and speaker events. Taking over the club this term are Corpuscles Hannah Taylor and Beth Graham, who met with me to discuss Peter Capaldi, Dalek-related accidents and the joys of green bubble wrap.

Could you start by telling us your roles within WhoSoc?

Hannah: I’m the current president. I look after the society, and I uphold the constitution. Which involves fabulous clauses such as “Every meeting should end by zooming in on Colin Baker’s face”.

Beth: I’m treasurer. I basically make sure we don’t go into financial ruin, and occasionally pester people to give us money, as we’re not the richest society.

Hannah: It involves sending me emails going “we can’t afford this, because otherwise we’ll have no money.” Our main expense is that when we have speakers, we pay for their travel expenses and so on, which is only fair really as we’ve asked them to speak.

The BBC have recently announced a new companion, any thoughts on that? What do you think of the show at the moment?

Hannah: I really liked what we saw of the new companion [Pearl Mackie] – there’s not much to go on yet, but there’s a bit of humour in there, which works quite well. This is the blessing of the show, that it’s constantly regenerating, you’ve always got new faces, so it always has a different feel whenever you watch it. Given the nature of Peter Capaldi as an actor, it’s been more serious lately, which I think is a nice change from what we’ve had previously.

Beth: Yeah, I’m looking forward to seeing how Peter Capaldi interacts with Pearl Mackie, it’s nice to have a more comedic companion. It’ll be nice to have someone who’s up for a bit of a laugh.

Hannah: Yes, and this is part of the nature of Peter Capaldi, as much as I love the odd bit of romance now and then, it’s nice to have a change from companions falling in love with the Doctor. The way he plays it, it’s much more obvious he’s not a human.

How did you both get involved in Oxford WhoSoc?

Hannah: When I first got the Oxford prospectus, on the Clubs and Societies page the one photo was of the Doctor Who Society stall at freshers’ fair. I remember looking at that prospectus and thinking “that’s the dream, isn’t it? Going to Oxford and joining the Doctor Who Society!” I knew it existed, so it was the one thing I was looking for at freshers’ fair. I knew I wanted to join, straight off.

Beth: Part of what drew me in is that they had new episodes showing at the time, and it was a way to go and see them.

Hannah: That’s quite a good way of doing things, actually, draw them in with new episodes on the Saturday and then convince them to stay for the classic stuff.

What sort of crowd does WhoSoc draw?

Hannah: It’s quite a mix. The stereotype is you expect lots of scientists, and very geeky sorts.

Beth: I’d say there were more humanities than scientists.

Hannah: Yeah, strangely enough, there are a lot of humanities. It does depend on the day you come, really. It’s quite a good society because everyone’s just very nice to each other, so it’s good to turn up and speak to people who love the show as much as you do.

Beth: The people are lovely, and it’s quite nice meeting with older people, who have been through the university system, but are still around for the meetings.

What are your favourite aspects of the job?

Hannah: Being able to say that you’re the President of the Doctor Who Society is really quite cool. It’s like, yeah, I’ve reached Ultimate Fan Level. Plus you do get experience running an organisation, which is always useful.

What are your plans for the society?

Beth: We’ve got Doctor Who cookies, a remote control Dalek going around – which I nearly sent down the stairs – that was a scary time, Hannah told me off.

Hannah: Daleks and stairs do not mix. But yeah, the plan is to get more people in, so we don’t collapse as a society. I think the geeky societies can be quite insular.

Beth: Yes, we want to make it a bit more open, so the casual fan can go too. As someone who was very much a casual fan joining the society, it can seem intimidating to be sat in a room with people who know far more than you do. But really, you’re there to watch and enjoy the show, so that’s personally what I would want to project.

How would you persuade someone to come to WhoSoc?

Hannah: I’d pitch the society the same way I’d pitch the show, really. It’s got something for everyone: there’s action, there’s humour, there’s drama, there’s romance, there’s everything you could want, at any point in time. It makes it very fun to watch as a group, and to get new friends out of it, and we have a lot of fun together.

Beth: There’s a good sense of humour about it as well – if the episode we’re showing has got ridiculous special effects, like one story we watched with a monster made of green bubble wrap, we’re going to laugh and heckle. It’s good-natured fun, and a chance to discuss it with people.

Hannah: And trips to the pub.

Beth: Oh yeah. No meeting is complete without a trip to the pub.

Doctor Who is expected to return to television on BBC in early 2017.