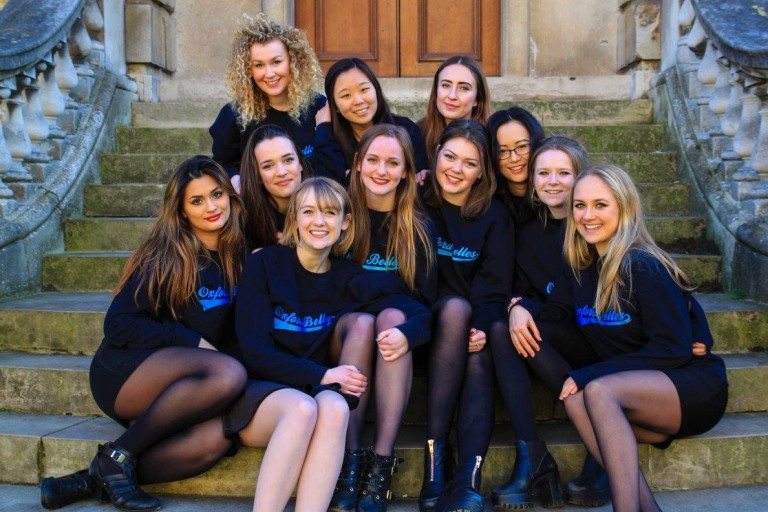 Singing for sponsorship: the Deci-Belles on tour

I was privileged to be allowed access into the sanctum of their Monday afternoon rehearsal. Excited and nervous, I stepped into the Somerville chapel, my arms full of instruments to precisely determine their levels of sass and kickass, ready to gather material for an article which would expertly toe the line between expository journalism and unabashed advertising.

The Belles take a relaxed attitude to rehearsals, by which I mean not all of them turn up and some of them come late. “This is really weird”, Teresa, a contralto, assures me. “There’s quite a lot of the Belles who have finals. It’s better than it looks”. The good thing about this is that the Belles are able to socialise and eat snacks. Lea, the vice president, is eating a tabbouleh, which is a kind of Greek salad. “Is it a nice salad?” I wonder. “Too much parsley”, apparently. On the other hand, Sophie, the masterful beatboxer of the group, is munching on a muffin. She can’t finish all of it, however, and so offers to share it with the other members, demonstrating the camaraderie of the group.

It’s often remarked that you can find out a lot about an A Capella group by their attitude to their closest rivals. What would the Belles say to ‘In the Pink’, Oxford’s other all-female A Capella group, in five words? “We are the originals,” President Emily says, before uttering words which cannot grace this quality publication. “We support all girls,” suggests Sophie, showing an admirable sensitivity, but perhaps not the ability to count. They finally settle on the assertive, and yet strangely quizzical “Girl power! Am I right?” “We actually have a really good relationship with ‘In the Pink’,” Emily assures me. “We almost went on a crew date with them, but none of us could be bothered to organise it.”

With a series of smash hits, including a cover of ‘Independent Women’ by Destiny’s Child, ‘Fallin’, a Black Eyed Peas mash-up and a Bieber blend featuring ‘Sorry’, ‘What Do You Mean?’ and much more, the Belles are putting together a forty five minute set for the Fringe. They arrange all their own music, often working out the right harmonies by simply listening repeatedly to the relevant tracks. Having been accepted by a venue capable of holding 169 people, the Belles now need to raise money to pay a guarantee to confirm their place. They’ve recently set up a Crowdfunding page, and are currently seeking support.

By offering a succession of rewards for pledges, the group is hoping to attract contributors. For example, £10 would earn you a handwritten thank you letter from one of the Belles, while, with a £75 pledge, you would receive a jingle of your own choice, to be arranged and recorded by the group, and sent as an MP3 file. I wonder whether some sponsored activities would make an innovative fundraiser. ‘You’re going to the Edinburgh Fringe, so why don’t you all grow fringes for sponsorship?’ A few uncomfortable laughs circulate. “I think it’s a nice idea,” Emily says patronisingly. “I don’t want a fringe,” Lea plaintively whines.

Attempting to extract all the pulpy juices from my joke, I ask whether the Fringe should change its name as a sign that we live in a multicultural society. ‘Maybe the Edinburgh Afro would work well?’ Rebuffing my ridiculous gag, one of the Belles points out it’s known as the Fringe because it’s on “the fringes of the media. I’d make a guess that it’s nothing about hair”.

Edinburgh is 367.5 miles, or 2939 furlongs, from Oxford, and so I imagine that life there is quite different. I want to make sure that the Belles will be able to communicate with people who might speak in some kind of Scottish dialect, and so I’ve prepared some phrases to test them. One member, Harriet, is actually from Edinburgh, and so she should already be an expert.

“What would I mean if I were to say ‘We’re a’ Jock Tamson’s bairns’?” I begin, in perfect Edinburghian tones. After some confusion comes a half-answer: “we’re his kids? Is Jock Tamson a rugby player?” Evidently a knowledge of Scottish aphorisms is lacking, because it actually means ‘We’re all God’s children; nobody is better than anyone else’.

A second error follows, when the phrase ‘do yer’ dinger’ is misidentified as a sort of question. It really means ‘to loudly express disapproval’, for all you linguaphiles out there. The last expression, however, ‘I’ll gie ye a skelpit lug’, is correctly translated by Emily as ‘I’ll give you a good slap’. She’s evidently keen to broaden her array of motivational strategies.

Having established that the Belles would flounder in a conversation with a Scot like my six year old self trying to get the Frosties Water Skills 3 badge, Emily points out that real Scottish people can seem few and far between in Edinburgh during the weeks of the Fringe. “It’s true,” Harriet acquiesces, adding that the influx of tourists is “a bit annoying”.

The music industry is notoriously difficult and expensive to break into: this is cogently demonstrated by the Fringe. The costs of putting on a show are extensive. “Apart from the guarantee on the venue,” Emily explains, “there are a lot of hidden costs.” Advertising alone will cost £1000, while every act at the Fringe must also pay a compulsory £300 registration fee. “I’ve had friends who have asked me why we’re fundraising for this,” Harriet remarks, “but they just assume that everyone has the money to pay for something like this […] it’s not a viable option”.

As a final question, I ask the team how many clichés they can say in thirty seconds. “Or,” I add, “You could just tell me what the best thing about being in the Belles is.” “I just love the feeling when our voices are in perfect harmony,” begins Sophie, “and when we make people smile.” The other Belles smirk and try not to throw up. “I definitely think we enjoy ourselves more than many societies,” says Emily. “There’s often a point when a society is more a chore than fun, but the Belles has never felt like that”.

So, if you’re interested in the Belles, how could you get involved? Well, if you’re feeling generous, you could check out the Belles Crowdfunding site, accessible through their Facebook page. It would certainly have them singing your praises.