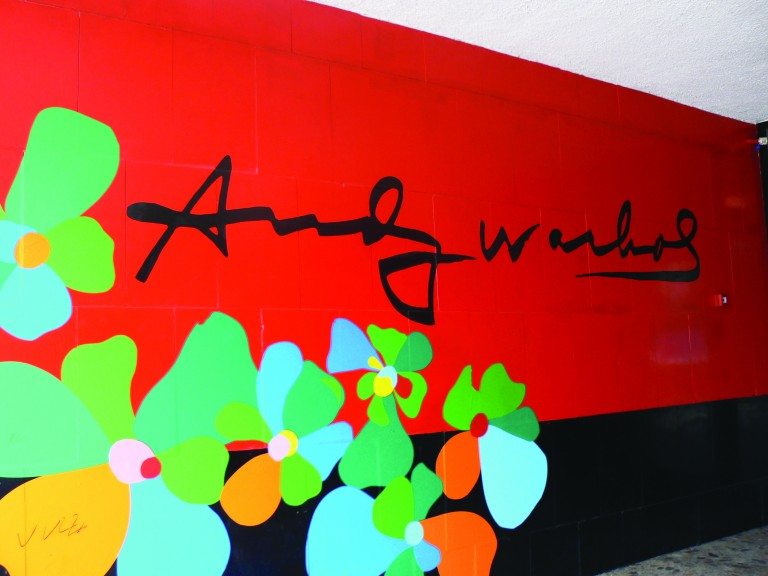 Recently I had the chance to sit down with Andrew Hall, who since graduating from Oxford in 1973 has gone on to amass one of the world’s greatest collections of Andy Warhol works. Mr Hall has been gracious enough to put his Warhol collection on display at the Ashmolean Museum in Oxford, where the works are being exhibited until 15th  May. Over the course of our thirty-minute conversation, Mr Hall and I spoke about his interest in Warhol, why he chose to display his works in Oxford, and what he hopes those who visit the exhibit will come away with after viewing some of Warhol’s lesser-known works. Here are some of the highlights of our talk.

In regards to his views on Warhol and why he thinks the American has become one of the most beloved and in turn expensive artists in history, Mr Hall remarked, “I think to anyone who has looked at the history of art over the last 50 or even 100 years, you come to the conclusion that there are a handful of artists who’ve had a really profound impact on art and the artists who have followed them. I would say for the post-war period, Warhol is arguably the most important artist. There has barely been an artist who has come after him who has not been influenced by what he did.”

I then asked Mr Hall about whether he viewed Warhol as merely an artist or also an important historic and cultural figure, one who helped shift the landscape of the art world by making his own versions of pop and modern art more mainstream. Mr Hall responded by saying that he thinks of Warhol predominantly as an artist, but conceded that “Warhol was undoubtedly a cultural icon. He melded that worlds of fashion and art and maybe that has been a lasting legacy in that the world of art and society have become inextricably bound together, for better or for worse…Art has become a sort of entry ticket to society, and although that side of the art world doesn’t interest me very much, Andy Warhol was very bound up with that aspect of it.”

Next we discussed Mr Hall’s connection to Oxford and specifically his reasoning behind deciding to exhibit his works at the Ashmolean Museum. According to Mr Hall, “since we’ve been collecting, it’s always been in the back of our minds to exhibit works to the public. We’ve done one-off collaborations with various museums where we’ve lent a whole group of works and taken over a whole gallery and focused on a particular artist… As part of our foundation (the Hall Art Foundation), we have a board of directors, one of whom is Sir Norman Rosenthal, who used to be the Exhibitions Secretary at the Royal Academy. Norman is a very good friend of the former director of the Ashmolean Museum, Christopher Brown, and a few years ago Norman suggested that I should go to Oxford, go to the Ashmolean, and meet Christopher. He more or less dragged me there kicking and screaming as at that time we didn’t want to take on more commitments, but Norman is very persuasive, and we were frankly blown away by the quality of what we saw at the Ashmolean. When I was at Oxford, there was not much to see, but the new Ashmolean is truly a world-class institution. Christopher was very charming and we on the spot agreed to work with the Ashmolean to achieve something. What later came out was an agreement to do four shows at the Ashmolean, with this Warhol show being the fourth and biggest of these exhibitions.”

I next asked Mr Hall what his goal was for the Warhol exhibit. Mr Hall remarked that he hoped those who view the works have a renewed appreciation for Warhol and perhaps have a broadened conception concerning the type of artist they perceive Warhol to be. “These are perhaps not the best known Warhols,” Mr Hall remarked. “There is no Elvis Presley, no Marilyn Monroe. I don’t think that we can move the needle in terms of the perception or notoriety of Warhol in England, but I think that maybe some people will get to see an extensive group of works by Warhol who wouldn’t otherwise have had that opportunity. There will also be other people who know a lot about Warhol but will nonetheless be surprised at this group of works… Some view Warhol as a very cynical or certainly ironic appropriator of other people’s images, and think that was his ‘big thing.’ Now that certainly is a very important aspect to Warhol’s work, but I think what you might take away from seeing this exhibition is that in addition to those conceptual processes, Warhol was actually an extraordinarily talented draughtsman and a brilliant colourist. So I think it’s the idea that it was not just the thought behind his work but also this extraordinary talent in a more traditional sense.”

Finally, I asked Mr Hall whether he plans on adding to his Warhol collection or whether the exhibit at the Ashmolean will serve as his pièce de rèsistance when it comes to Warhol.  Mr. Hall responded, “If you’d asked me a month ago, I think I would have said yes, that is it for Warhol. But here we are a month later and I’m thinking that maybe that’s not necessarily the case. Maybe this is something that will continue to evolve. It is certainly the case that in our collecting we have tended to collect certain artists in great depth, almost with half a mind to doing exactly what we have done at the Ashmolean, doing some sort of show that can be shared with the public. That way I can have some fun but in the process educate myself and educate other people by bringing forward works by artists that are under the radar screen as well as pieces by more famous artists that are also under the radar screen.”

Andy Warhol: Works from the Hall Collection is on display at the Ashmolean Museum in Oxford between February 4th and May 15th.