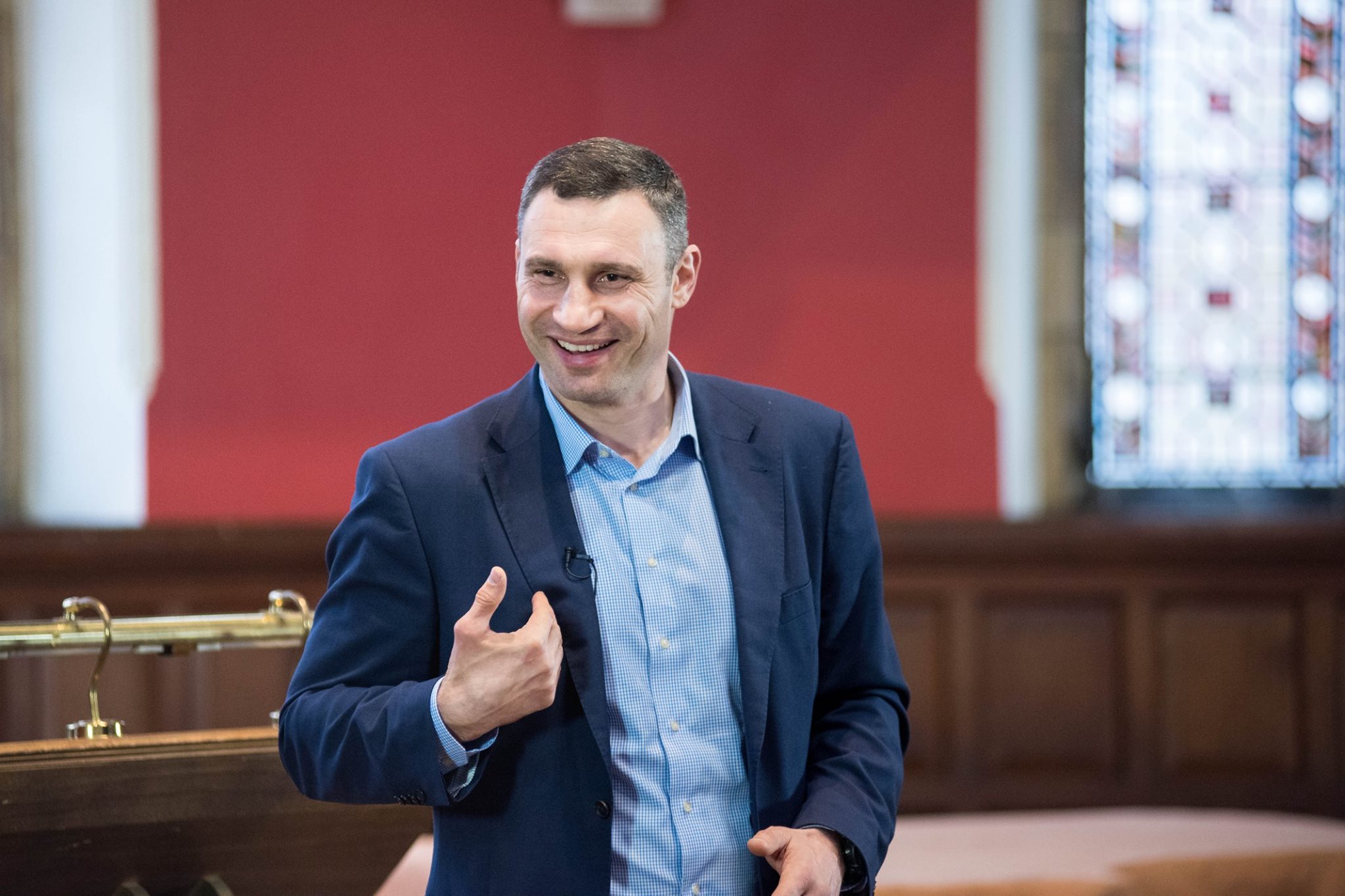 The résumé of Vitaly Klitschko is an extraordinary one. During a professional boxing career, from 1996-2013, he was defeated only twice, and never suffered a true KO; from 2005-2013, he balanced a significant involvement in politics with that professional boxing career; since 2014, he has fully committed himself to politics, serving as mayor of Kiev. When not boxing, he is known to play chess with former World Chess Champion Vladimir Kramnik. A physically and intellectually imposing figure, in short.

So it was not without some trepidation that we met him at the Oxford Union on last Thursday. Our conversation kicked off on the issue of the EU, specifically the British referendum. Klitschko, as an ardent believer in the value of the European community, emphasised the unscrupulous manipulation of politicians: “they try to tell you that somebody is guilty…The European Union has so many problems, and so much influence in Britain, they say.” For him the EU represents a value of unity: “it’s like boxing. The countries in the European Union are like the fingers in the hand – the fingers are weak, but if all the fingers come together, in a fist, it’s much stronger.” An analogy with America hints, perhaps, at Klitschko’s belief in the possibilities of a European super-state  – “the unity of the US makes it one of the world’s strongest countries, and I am sure that the union of the European countries will bring much success, and that this unity will be strong both politically and economically.” Ultimately, though, it is the manipulations of politicians which really anger Klitschko – “it’s much more important to look at the arguments, not just to tell people what they want to hear.”

“more than 20 years ago, in 1991, we had a dream. We lived in a dictatorial country, the Soviet Union, and we had a dream to build a modern, European, democratic country of Ukraine”

When we raise the prospect of Ukrainian membership in the future, Klitschko gets stirred up, remembering the start of the country’s longing for European integration – “more than 20 years ago, in 1991, we had a dream. We lived in a dictatorial country, the Soviet Union, and we had a dream to build a modern, European, democratic country of Ukraine.” But those dreams were frustrated: “the politicians said it would happen very soon. But it’s been 20 years, and it’s still not happened.” Ukraine, for Klitschko, is an outlier in Eastern Europe: “you look at Poland, the Czech Republic, Slovakia, and you can see the progress they’ve made. I know we can do it, if they can” – whereas, as Klitschko put it later on his talk, Ukraine is “frozen. A few years ago, it was still one of the most corrupt countries in Europe.”

The Euromaidan riots of 2013 affected Klitschko deeply: “for the first time in the history of the European Union, people died under the EU flag. People stay – people die – for the idea of membership of the European Union.” It is profoundly wrong, for Klitschko, that Ukraine is still not an EU member state: “We are European, with our history, with our mentality. Geographically, we are European; we need European rules in our country, European standards of life.”

He knows it won’t be easy, though, to repair the country, and move it towards European integration – “it’s going to be an uphill struggle. But the idea of changing the country, of bringing it back to normality, is one I am devoting a lot of time to.” Klitschko never had a dream to be a politician, he tells us. But he was inspired by the dream to build a new country, and despite the difficulties of modern Ukraine, he is sustained by his vision – “we have huge potential. I know, better than anyone else, that the rules of life are this: no fight, no win. You have to fight for your dreams, you have to fight for your vision, you have to fight for your values. That’s why I’m in politics.”

“all the changes in this country come from the capital, from the heart. I am right now responsible for everything that happens in the capital of Ukraine.”

As Mayor of Kiev, Klitschko is just as passionate about the potential of Ukraine’s greatest city. He dwells on the unique importance of his role: “all the changes in this country come from the capital, from the heart. I am right now responsible for everything that happens in the capital of Ukraine.” From that position, Klitschko claims, he is doing his utmost to fight Ukraine’s problem with corruption: “We’re fighting for a better future for our country. It’s not easy to change things; it’s not easy to fight against corruption – reform is sometimes painful for people.” Klitschko paints a striking picture: “we have had a 30 percent budget increase: not because our economy is booming, but because everything is transparent – so much money was being stolen before by corruption and bribery.”

It is certainly hard not to be swept along by Klitschko’s rhetoric, at his proclamations of new buildings, new commissions, modernisation and new technology – and especially at his witty throwaway comment that “I am looking forward to implementing Uber in Ukraine.” He combines a powerful passion – “there are so many modern things I want to bring to our city…I have a lot of dreams to change our city, to make it much more comfortable for every citizen and every visitor” – with a Boris-esque chirpiness – “everyone wants fancy cars – I ride a bicycle.”  When he extends an invitation to come to Kiev, to bask in its historical and cultural significance, even with our knowledge of the country’s ongoing problems, it is a tempting offer.

“there’s a lot of adrenaline in boxing: in politics also, but much more! A lot of hitting in boxing, of course – and also in politics, but much harder in politics!”

Finally, the conversation turns to the relationship of Klitschko’s two great passions, boxing and politics. There is much that is similar, he wryly observes: “there’s a lot of adrenaline in boxing: in politics also, but much more! A lot of hitting in boxing, of course – and also in politics, but much harder in politics!” Conversely, there is much that is different: “in boxing, you have clear rules. In politics, the rules are less definite: people hit you from behind, and below the belt. Politics is much more of a martial art than boxing.”

But overall, Klitschko conveys the unity of his approach to the two pursuits: “in both cases it’s a fight, where you have a challenge, and you have an opponent – although of course it’s only one in boxing, and many in politics.” Likewise, as he remarks later on in his speech, “it’s important in politics to have a character, to have a goal, to be organised, disciplined.” The two are, for Klitschko, intimately connected: “everything I have in sport I use in my everyday life.”

When we press Klitschko on the possibility of a presidential run, which he contemplated a few years ago, he remains coy: “none of us knows the future, but life is always so interesting – I’ll give you an answer in due course.” Klitschko certainly seemed profoundly concerned with destiny: when asked what his dream dinner date would be, he replies that it would be Jesus, and he would simply ask him: ‘why?’ A presidential run cannot be ruled out, at any rate.

While Klitschko’s idea of having a dream and fighting for it was at first hard fully to take seriously, reminiscent as it almost was of motivational clichés, as parodied in Shia LaBoeuf’s ‘Just Do It’ video, the sincere passion and vision of the man came through. He spoke with a voice that was, though at times politically cautious (as when he evaded a question about allegations against the current Ukrainian President), humorous and humane. It is to be hoped that his optimistic vision for Ukraine will come to fruition.