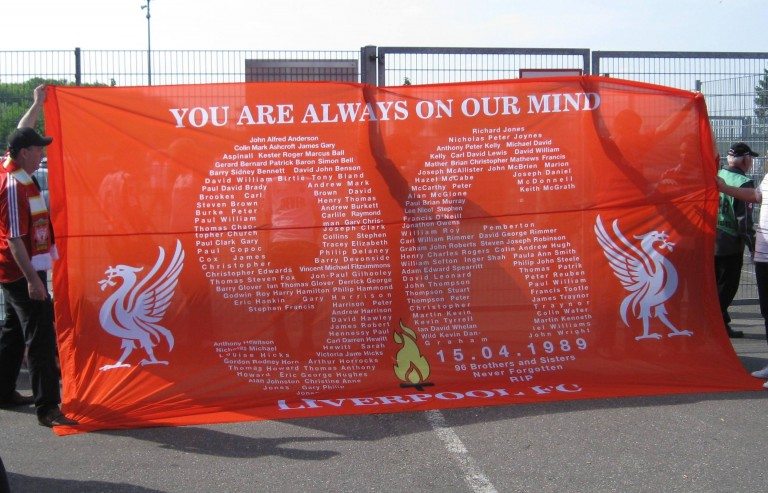 An Article of Faith

The Hillsborough disaster is seen by many as one of the darkest days in the history of British sport. It is an event seeped in tragedy and deception, and the emotive power that goes alongside discussion of the disaster. Indeed, Eamonn Holmes had to apologise on social media after he insinuated that the Hillsborough disaster and the attack on the Manchester United team bus were both acts of hooliganism. There is a specific reason as to why it is so unacceptable to suggest that this was the fault of the Liverpool supporters, even though this took place in a time of rampant hooligan culture within football and the proliferation of ‘firms’. It is because of the fact that we have now found out that it was the actions of South Yorkshire police that resulted in the death of 96 innocent fans on that fateful day. This was after what could only be described as a cover up, attempted to blame the Liverpool fans, with the Sun running an article about a supporter who supposedly urinated on a policeman. To this day, there are some in Liverpool who will refer to the newspaper as the ‘Scum’ because of the way that it portrayed the events. The loss of life was so painful because of the fact that the deaths could have been easily avoided. But it is of primary importance to ensure that the police forces of the United Kingdom can be trusted once again with the security of the country. It is not the case that British law enforcement is inherently evil by any means. But there is evidence that, like at Hillsborough, it has the potential to fall woefully short.

Skip forward a decade to the murder of Stephen Lawrence and the establishment of the Macpherson Report which found aspects of the police to be institutionally racist. This is not a surprising conclusion to make. For too long, BME police officers were under-represented and often tokenised in the areas in which they were being deployed because the police forces were under the impression that better relations between police and citizens could be solved by racial similarity. The statistics showing how much more likely you are to be arrested if you are black is nothing short of terrifying. Black members of the general public make up only 2.7% of the population but make up 14.6% of stop and search numbers and 8% of arrests. This is not entirely the result of police prejudice. Minority ethnic groups are more likely to find themselves in the lower strata of the socioeconomic pyramid. This is because they will have had fewer opportunities to accumulate wealth over generations and because of the fact that their forebearers will have faced significant discrimination within the work place as well. The fact that these individuals are likely to lack economic wealth disproportionately explains some of the differential. But ultimately, that is not enough. There are still many documented cases of when police forces have failed to take responsibility for their actions. Christopher Alder died whilst police officers made monkey noises around him. Sean Rigg (who died in a Brixton prison in 2008) was found to have had falsehoods about the events circulated in the media and the IPCC once again proved its sheer incompetency in dealing with custody deaths. This is hardly a shining endorsement of a policing system that can be trusted.

However, in such darkness, there is hope. The aftermath of the Macpherson Report meant that 67 changes were made to police practice within 2 years of the report being released. There was major overhaul of the operation and recruitment process within individual police forces and more centrally as well. Representation is far better than it was before. But there is something that are more important than these formal issues. This is the change in culture within the police force. The police are trying very hard to shake the condemnation of institutional racism that occurred in 1999. It has tried far harder to partake in community cohesion schemes, work more with community leaders of all faiths and creeds to produce better and more informed references to criminality within ethnic minority communities. It has even had the extent to which it can profile racially whittled down so that it is no longer considered to be ‘standard practice’. There is still a lot that needs to be done in the police. The IPCC needs serious reform or may well warrant dissolving and being reformed again. This is because it takes a special kind of insidious ineptitude or malevolence to have more than 600 deaths in police custody and not a single conviction for any of those whose lives were so tragically cut short. This suggests a systemic problem with the way in which the IPCC functions. But this is not a reason to not have faith in the police. It is necessary to invest ourselves as much as possible into ensuring that we have the policing system is the very best that it can be. But we have to have faith in the institution and it’s ability to change. It is in this cooperation that we find opportunity.