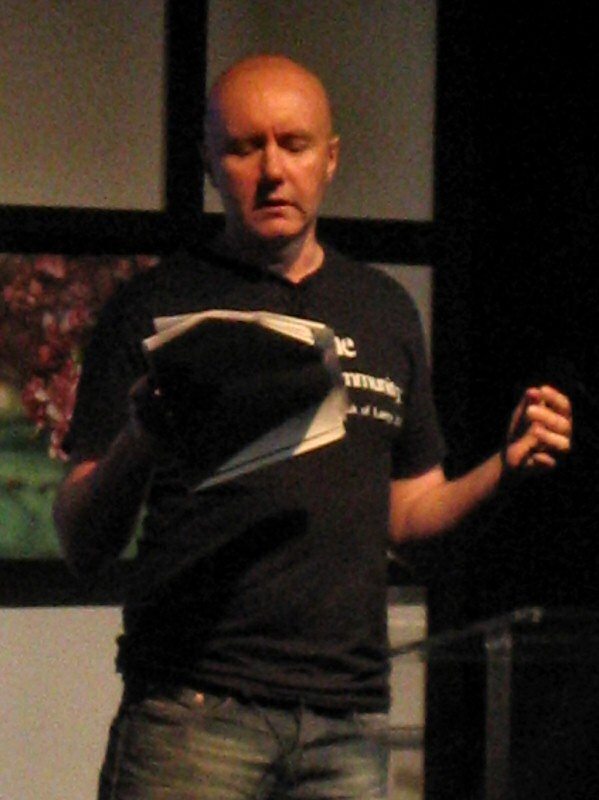 I was lucky enough to see Irvine Welsh speak at the Cambridge Literary Festival a few weeks ago. Now based in Chicago, he was visiting the UK in promotion of his latest novel, The Blade Artist, and, as he told me afterwards, to attend a few key meetings about the production of Trainspotting 2. It looks like his dark vision of Edinburgh’s underbelly is set to enjoy a long-awaited revival in popular culture. However, although it’s been 20 years since the original film and 23 since the original novel, the world of Renton, Sick Boy, Spud and Begbie has expanded over a number of novels in the meantime, from the 2002 sequel Porno (the basis for the unsurprisingly retitled Trainspotting 2), to 2011’s prequel Skagboys, and most recently, Welsh’s latest creation, The Blade Artist.

Anyone who’s read an Irvine Welsh novel knows what they’re getting into: colourful characters, colourful language, idiosyncratic dialogue and general messed-up-ness. This latest offering is especially intriguing, since it’s a complete reinvention of one of his most sordid creations. Set many years after Porno, the story focuses on perhaps the most memorable character from both the original novel and film, Francis Begbie. Immortalised by Robert Carlyle’s portrayal, Begbie’s quick temper, violent outbursts, and abrasive speech are well known. However, the Begbie we’re introduced to here is a far cry from the crazed psychopath of previous instalments. Freshly rehabilitated after a lengthy prison sentence, Begbie has moved to California with his art-therapist-cum-wife, with whom he has two daughters, and seems to have turned over a new leaf, focusing his former aggression on creating visceral works of art (hence the title). When he returns to Edinburgh after hearing that one of his sons there has been murdered, the past comes back to bite pretty damn fast. The novel is interspersed with memories from Begbie’s childhood and the start of his life of violence, shedding light on his hitherto unknown backstory, and one gets the impression that the ‘old’ Begbie is never too far away.

The plot is perfectly functional, although perhaps not quite as gripping as some of his earlier works, but as ever it’s Welsh’s prose that gives the story its edge. Historically it’s often been impenetrable at first sight, as much of it is written in phonetic Scots dialect, forcing you to read it with an accent (e.g. “The problem wi Begbie wis . . . well, thirs that many problems wi Begbie. One ay the things thit concerned us maist wis the fact thit ye couldnae really relax in his company, especially if he’d hud a bevvy,” from an early scene in Trainspotting). In this way the language really gets into your head, and you start thinking in Scots, and it’s one of the most immersive literary devices I’ve ever encountered. Consequently it comes as almost a surprise when Welsh reverts to standard, even eloquent prose, something which struck me when first reading 2008’s Crime, a remarkably restrained and underappreciated work, set largely in Miami rather than Edinburgh, but still unmistakeably Welshian in its subject matter. This is somewhat the case with The Blade Artist – largely told through ordinary third-person prose, the characters nonetheless speak in that trademark dialect that makes reading it so engaging.

Of course, using dialects, especially where angry Scotsmen are concerned, can throw up some challenges. One of the things Welsh discussed at the talk in relation to his new life in the US was the dramatic difference in attitude towards strong and explicit language, especially the mother of all curses, ‘cunt’, which is used by his characters the same way most of us would use a comma, and often in a passive or jovial way between friends (a quick CTRL+F search on a pdf tells me that the word pops up 737 times in Trainspotting alone). Such light-hearted attitudes don’t hold up well in the States, where the word has much stronger sexual connotations and is almost unutterable in any context. He recalled a humorous attempt to teach an American friend how to use it correctly when addressing friends, which failed miserably. But I digress.

If you’re new to Irvine Welsh, it’s probably best to start elsewhere, for the sake of chronology if nothing else, as not much context is given in the novel itself, and many cameo appearance by other characters from elsewhere in the canon will most likely be lost on the uninitiated. Otherwise it’s an interesting and engaging new entry into the Trainspotting universe, and should tide fans over until Trainspotting 2 is released.

NCIS: TV at its best