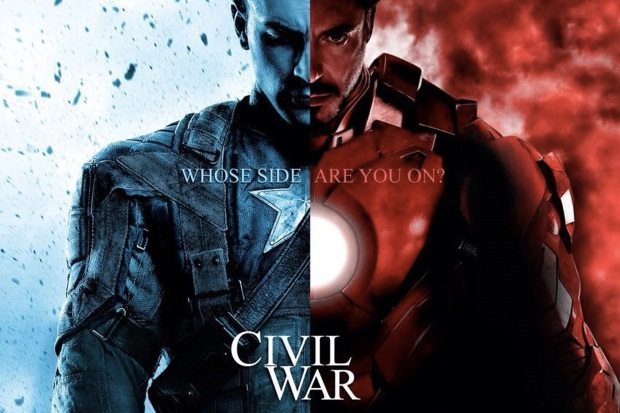 Super soldier. Moral compass. When Captain America declares “Sorry Tony, if I see a situation pointing South I can’t ignore it. Sometimes I wish I could,” the audience watching Captain American: Civil War is almost intrinsically inclined to trust, and ultimately side with, the Cap. The power of the Russo’s new film, however, is that advocacy for the Captain’s side is not a foregone conclusion. Indeed, Civil War takes the binary world of good and bad that Steve Rogers is used to and turns it into a sea of grey. In so doing, Marvel’s latest effort manages to masterfully combine moral complexity, child-like escapism and bags of humour. Yet it also offers a candid reflection of current political times, and also modernises the film’s eponymous hero; Captain America.

In a recent interview, Chris Evans suggested that people admire the Captain’s ability to see the world in absolutes; there’s good and there’s bad, and the Captain always fights for the former. It’s this ideal which has pervaded the character’s eclectic mythos. Created as a piece of war-time propaganda in 1941, the first ever cover sees Rogers delivering a devastating hook into Adolf Hitler’s beleaguered face. If ever there was a symbol of nationalistic intent, here it was. This outlandish embodiment of ‘America the Brave’ situates the Captain’s genesis in a particular historical moment. He was created to engender nationalistic pride in the pivotal years of the war, but this also explains why his popularity died away.

The murky international waters that the US saw themselves in in the post-war years did little to embolden their belief in American Exceptionalism. Instead, America was the bad guy in many conflicts, none more so than Vietnam. All of a sudden the jingoistic pride which the Captain used to reflect was antiquated; he was a man frozen in a former time.

The fact that Marvel chose to literally freeze their super soldier at the close of Captain America: The First Avenger offers a poetic visualisation of this transition. The films have since focused upon Roger’s difficulty in transitioning to suit modern-day life. Modern day life isn’t simple. The Captain’s old enemies were plain to see: men in swastikas and communist attire. Yet modern day America is also plainly not the same. Gone is their aura of invincibility due to the events of 9/11, whilst the fallout of the Iraq War and the NSA scandal to name but two creates a much more uncertain, less trusting, American psyche.

Indeed Marvel’s most successful plotline has been to implant Steve into a world where deception is commonplace. This is something which Joss Whedon took steps to achieving with Avengers Assemble, but was naturally expanded upon in his next solo movie; the astute political thriller The Winter Soldier, as well as Avengers: Age of Ultron. When you conflate these films with Civil War then there is an unmistakable arc to the Captain’s development. Whilst in Avengers Assemble we see the Captain fight against the unmistakable ‘enemy’, The Winter Soldier sees him confront the ‘enemy within,’ and Age of Ultron shows Cap the Avengers’ manifold imperfections.

Even in these latter films, however, there are unmistakable antagonists. In The Winter Solder, The HYDRA agents who have infiltrated and manipulated SHIELD may have the façade of an ally, but underneath they are still the villains of the piece. This film sees the Captain come to terms with the modern world in an abrupt fashion, but leads directly to Civil War. The Winter Soldier taught Steve that the good guys don’t always deserve that moniker, and that blind allegiance to government is not advisable.

To step away from the political party line so decisively serves as both a damning indictment of modern-day government, but also a sure-fire reflection of Roger’s increasing modern-day maturity. Rogers here reflects his increasing nous, but also touches upon his now enduring appeal. In a world as morally grey as the one the Russos conceived, the Captain’s decision boils down to a fundamental belief in friendship and honour.

Whilst some would argue that the Captain’s idealism is antiquated, it serves as a tonal contrast to Robert Downey Jnr’s Iron Man. Downey Jnr provides his most compelling performance as the witty but reckless genius Tony Stark in Civil War¸ and criticises the outmoded idealism of Captain America. Unaccountability is not how the modern world should work, he précises, with his own conscience racked since the events of Age of Ultron. Yet Rogers is intent on applying his strict moral code to the modern day world. The enemies may be harder to locate, and agendas more blurred than in a bygone age, but that shouldn’t downgrade the moral values he’s believed in since the Second World War.

After films which forced modernity onto the Captain’s shoulders, here he decides to re-mould the political world on his own terms. By creating a character who realises that the world has changed, but that basic human morality shouldn’t, Marvel creates a character who is modern but old-fashioned all at once. One only has to look at the progression of his on-screen suits. Gone is the bright, idealistic colour seen in Avengers Assemble, but gone also is the solely dark tones in The Winter Soldier. Now, the Captain wears a uniform which features all the unmistakable patterns and colours which comic-book fans are used to, but in a less vibrant tone. The world may be darker, and the moral debates greyer, but that doesn’t mean that it should be devoid of all hope and colour.