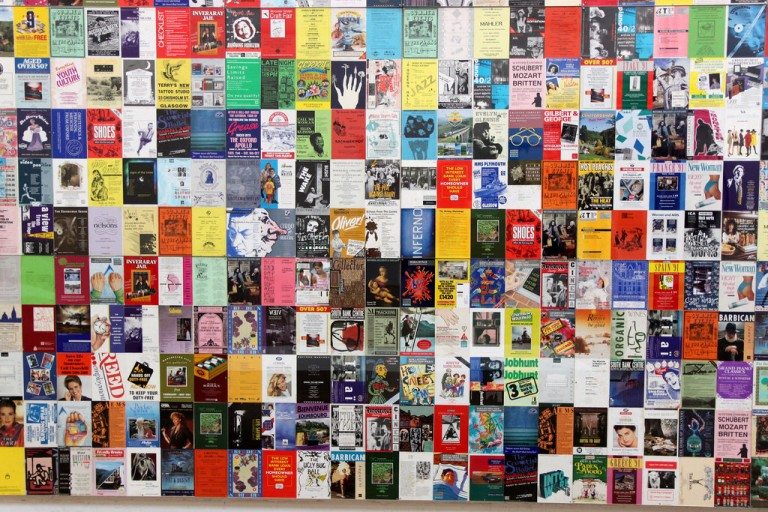 Review: KALEIDOSCOPE: A Moment of Grace

KALEIDOSCOPE is Modern Art Oxford’s series of evolving exhibitions to celebrate their 50th anniversary. Throughout the year they’ll be leaving the galleries open while artwork is taken down and installed, and re-exhibiting a selection of previously displayed works alongside new ones. For most of Trinity term, the exhibition on display is A Moment of Grace, an eclectic range of modern art about consumption, re-using materials and critiquing political and cultural systems. The exhibition has a global feel with artists from Croatia, Zimbabwe, Brazil, the USA, China, Nigeria, Zambia, Japan, Germany and the UK. I went to take a look.

Walking into the upper gallery, the room is light and airy; in the centre of the room are what appear to be giant, collaged polaroids. Yoko Ono has an interactive piece from 1961 on the wall where the public are asked to take a nail from a bucket and hammer it into a wooden block. The room periodically fills with the echoes of hammering.

The piece I was most drawn to in this room was Njideka Akunyili Crosby’s Something Split and New (2013). Made on paper and attached to the wall by binder clips (some of the pieces in the exhibit seem extremely fragile), the multimedia piece addresses migration and identity through her life in Nigeria and America. The artwork shows a group of people in conversation, sat in a living room area. The floor, some fabrics and, most notably, one woman’s skin, are made of small photo transfers of Crosby’s family photos and a range of images from newspapers and the internet. Crosby comments, quoted in the exhibition notes, ‘I feel like I’m taking this Western visual language I inherited, just as African writers inherited English, and I’m trying to make a new version of it so it speaks to another place.’

Moving into the next room, it’s instantly colder. There’s less light and the white walls of the previous room have been replaced with a pale grey. Several of the artists make a reappearance with more work – particularly John Latham, whose art on display from the 1960s and 1980s revolves around the destruction and reinvention of books as sculpture. In a small adjacent room, Kevin Beasley has a sound installation. I entered the room expecting the sound to be coming from a speaker; instead giant wooden reels play a cassette tape. Beasley has created an ‘audio calendar’ with enough cassette tapes to be played for eight hours a day, five days a week for a year. Soft, old music was playing during my visit but the installation includes oral history recordings and audiobooks also.

But by far the most atmospheric experience happens in the Piper Gallery. Leaving your shoes outside, you enter into a dimmed, carpeted room. At first, I thought the sounds of the projectors were ocean noises. Five projectors cast images of moving, coloured heat-sensitive liquid onto the walls. People are invited to sit or lie down on cushions and experience the soothing, psychedelic visuals. This is a room you could comfortably fall asleep in. The installation is by Gustav Metzger whose words, that ‘every step in nature is a moment in grace’, gave the exhibition its title. He hopes that his work undermines the commodity status of art and that people will experience an ‘inner warmth’ from it. I certainly did.

You can visit A Moment in Grace for free from now until 29th May. Or, catch it slowly transitioning into Mystics and Rationalists from 23rd May until 9th June, when this next exhibition takes over.