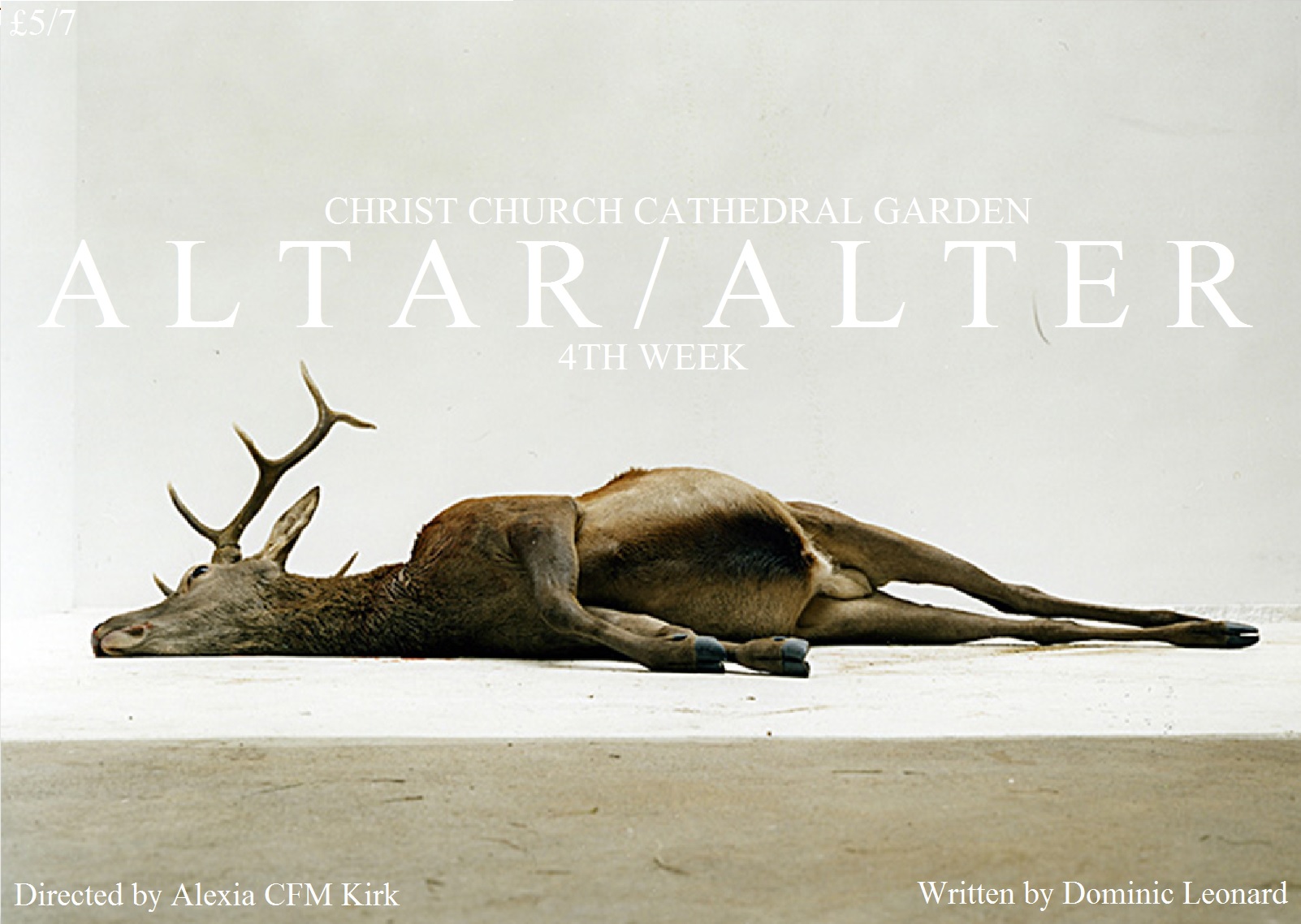 Iphigenia in Aulis is an intense play, one fraught with high tensions, emotional drama and fundamental ethical questions that face the audience and the actors at every turn. Beginning in the middle of Agamemnon’s ethical crisis – should anyone sacrifice their daughter on behalf of their army? – it is destined to be a hugely psychologically challenging play, asking the audience to consider the principle of utilitarianism at its core within the backdrop of the familial and political values of the ‘heroic’ Greek world, and ultimately, to come to terms with both Agamemnon’s decision and Iphigenia’s noble self-sacrifice. For this reason, any version of such a hard-hitting drama has its challenges, as it aims to navigate through the moral minefield of the play. This particular version, written beautifully after Euripides’ rendition of the myth by Dominic Leonard, an English student at Christ Church, condenses his play down to the raw emotional and ethical essentials, distilling Euripides’ verses into a drama that does not waste time or words, but is all the more effective for its brevity.

Leonard’s version of the play had innovated in two extremely effective ways. Firstly, Artemis was a physical presence on stage throughout, casting an ominous shadow over every action, reaction and decision. It is rare in the original tragic tradition for a goddess to be onstage in a non-speaking role, yet Seline Delcourt was able to control the events of the play in an extremely effective and threatening way. At first I was unconvinced by the portrayal of Artemis, the goddess presiding over nature and youth, as a quasi-fury, dressed in a gothic all-black style and constantly carrying two very real knives, but as I adjusted my mind from judging this play only in the context of Greek tragedy – a symptom of my degree – to considering the production purely on its own dramatic merits, I came to realise how successful this addition to the cast was. The whole play was under the spell of this psychological force, which through its physical embodiment added a whole new layer to the different pressures driving the play, and the doomed inevitability of the final act.

The second innovation, the addition of the personified ‘wind’ to the dramatis personae, startled me somewhat at the beginning of the play, but again, due to the skill of the writer who had incorporated it and the brilliance of the actor who took on the role, I found it to be a very intelligent and well-thought out addition to the play. The Wind was shackled by Artemis, opening the play with a vivid visual and verbal reminder of the situation at Aulis: for those of us already familiar with the story, we could appreciate it as a striking and attention-grabbing way of presenting the dramatic prologue, and for those who were new to the mythological backdrop, it formed an essential but well-integrated introduction to the plot and the situation at the beginning of the play, which many other interpretations of tragic prologues fail to do without seeming awkward. If the ‘Wind’ had only had that single role, it would have been effective, but throughout his constant imprisonment in chains, Joshua Cathcart maintained his characterisation as a half-crazed wild being full of pent up energy and emotion. When, in a single strike of her sharpened knives, Artemis released him from his shackles – a devastatingly brief and almost dismissive notion given the intense and powerful sacrifice scene that preceded it – he sprang forth to deliver his damning epilogue of the world in which the audience had become embroiled, leaving us with a fittingly bitter universal message to take away with us given the futility of the characters’ positions in the drama.

Leonard, in considerably shortening the original script, had condensed the original lengthy monologues and dialogues into scenes that fell hard upon each other, with almost every line carrying a hard-hitting impact and a range and depth of emotional significance. In order to carry this intensity effectively through the play, a strong cast was required, each able to bring out the highly individualized personalities called for in each of the characters in the drama. This the actors all managed extremely well: I have already picked out the performances of Cathcart and Delcourt, but it would be unfair not to mention Annabel Sim’s interpretation of Clytemnestra, capturing both the universal grief of a mother losing her daughter and the vengeful anger that is so characteristic of Clytemnestra’s portrayal throughout literature, as well as the striking balance in personalities between Tom Ames as Menelaus and Jonny Wiles as the tortured Agamemnon. This talent was combined with the creativity of the director Alexia Kirk, composing certain scenes to maximize their dramatic impact. Particularly impressive was the fight scene between Achilles and the oncoming Greek army, made even more dramatic with the use of real swords and knives, and the climactic point of the play, where our breath was held in drawn out suspense as we watched over the altar, until Artemis’ movement distracted us just long enough for Agamemnon to do the deed before we looked back again.

There were only two small quibbles I had with the production as a whole. Being a garden play, of course there will always be competition with background noise, and the frequent tolling of bells around Oxford was not always taken into account when lines were being delivered. This was not helped either by the layout of the seating, in two long rows facing each other and the stage in between. The stage, I felt, was on the whole longer and wider than it needed to be – although it did become dramatically effective in the fight scene and the final sacrifice scene – and in an effort to address the audience equally, characters would sometimes have their backs turned to our side, making their lines a little less audible and therefore less impactful than they perhaps deserved. This issue with spacing was especially obvious with the choral-like ode at the beginning, delivered from the corners of the stage in lines that overlapped at random. In principle this was a good idea, but in practice, the words were largely carried over to the audience a little jumbled or completely unintelligible because of the swathes of space between them and us. Indeed, the chorus played a very insignificant role, confined only to that brief interlude in the action, and in a modernized production where no word was wasted, the complexities and digressions that an ancient Greek chorus brings to the drama took away rather than added to the overall performance.

Overall, however, this play was a triumph. I was extremely impressed by the succinct and careful writing, which never seemed to dip in quality – Leonard was able to pay due homage to his ancient predecessor whilst creating a new and dramatically effective alternative piece. However, no less praiseworthy was the acting and the directing, which combined to create a powerful and gripping tragedy from beginning to end.