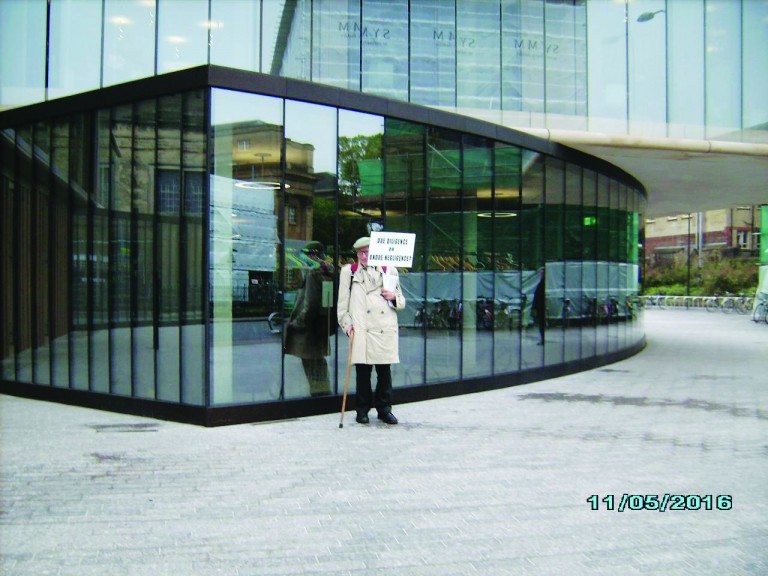 Since late 2015, Oxford University has come under scrutiny for its decision to accept a donation of £75 million from controversial Russian oligarch Len Blavatnik, whose ethics and business practices have come under question. Last Wednesday, Oxford alumnus Martin Dewhirst and Russian translator John Crowfoot braved dubious weather to conduct a picket denouncing the opacity of the University’s due diligence process with regard to the donation.

Dewhirst, who matriculated at Christ Church in 1958, held a placard that read “Due Diligence or Undue Negligence?”. A lecturer at the University of Glasgow, he was among the list of prominent scholars, educators, activists, and alumni who signed a petition in November urging Oxford to examine the integrity of its due-diligence investigations of foreign donations, and to “stop selling its reputation and prestige to Putin’s associates.”

Many scholars, educators, activists, and alumni have signed a petition urging Oxford to “stop selling its reputation and prestige to Putin’s associates”

The two protestors were invited inside the School of Government building for a private conversation with Dean Ngaire Woods “long before the Duke of Cambridge arrived at the event,” Dewhirst said. The conversation wasn’t a confrontation, he noted, but a later incident did strike him as such.

“A photographer from Cherwell was told in no uncertain terms not to photograph me and my placard in front of the Blavatnik School of Government, even from the opposite side of the street. If she did, she would have her name taken by an employee,” Dewhirst said.

Sophie Jordan, the Cherwell photographer in question, said that she and Dewhirst were told it would be “unfair” to have the School of Government showing in the background, since the protest, according to the staff, wasn’t aimed at the School in particular—though Dewhirst disagreed.

Another reason the staff gave, Jordan said, was that “taking photos on university grounds is apparently forbidden, which we were both surprised to hear.”

“Martin Dewhirst had been protesting outside the building alongside the fans of the royal family, and since they were allowed to take pictures of Prince William talking to various other people on his way out of the School, it seems slightly unfair that two members of staff insisted we ‘walk a mile down the road’ to do this,” she said.

Oxford graduate Ilya Zaslavskiy, the author of the original petition to the University and an organising member of the campaign, told the Russian publication Svoboda that the methods the University employed to silence the protestors were reminiscent of Putin’s.

“[The staff’s threats to report Jordan and Dewhirst] remind me of the statements of Moscow police, not Oxford Uni employees,” he wrote in a message accompanying a translation of the article. “But this is what you get when you take money from the likes of Blavatnik, I guess.”

Zaslavskiy also speculated that the Dean had invited the protestors inside for conversation merely to remove them from the sightlines of photographers. On the same day, he’d held his own protest in New York City outside of the building for Oxford’s North American Alumni Society.

A vocal critic of the University’s cooperation with, and acceptance of philanthropy from, controversial figures like Blavatnik, Zaslavskiy has also experienced his own share of silencing at the hands of University officials. On 11th April—days after he published a fiery open letter to Vice Chancellor of the University, Louise Richardson—Zaslavskiy was forced out of a meeting at the North American Alumni Society by security when he tried to ask a question on the issue.

“As if I’m some criminal, they walked me out of the panel discussion in front of 300 other alumni. They didn’t allow me to speak even for ten seconds,” he said. “Is this how Oxford deals with dissenting voices now?”

“Is this how Oxford deals with dissenting voices now?”

The University’s apparent refusal to engage in dialogue is a key issue for Zaslavskiy, who repeats that the University is merely “parroting back” the same rhetoric about reliability of its due diligence process.

“Oxford University has a thorough and robust scrutiny process in place with regard to philanthropic giving,” the University has said in previous statements. “The University is confident in this process and in its outcomes.’’

Zaslavskiy and fellow activists, however, are not so confident. Freedom of Information Act inquiries into past financial affiliations—such as the joint business award that the Saïd Business School offered with Moscow’s Alfa-Bank from 2007-2011—yield little to no information at all. Zaslavskiy is alarmed by what he calls an overwhelming lack of transparency.

“Why did they quietly close this award and why is all of the information erased?” he asked. “Who did due diligence, or did they do it at all?”

Martin Dewhirst said that Prince William’s attendance at the new building’s opening this month “would have been justified, in my opinion, if the due diligence process had been transparent, thorough, and robust. It wasn’t.” He also notes that University representatives have thus far been “unable to provide me with clear answers” as to why the compilers of the due diligence reports and the members of the Committees that approved Blavatnik’s donation “did not ask for any relevant materials to be translated from Russian to English” when none of them, in fact, could read Russian.

“The process of due diligence at Oxford University…cannot be trusted. It lacks credibility”

“As long as due diligence at Oxford University is performed anonymously, without input from independent experts in the relevant field(s), the process cannot be trusted. It lacks credibility,” said Dewhirst.

For Zaslavskiy, that credibility starts with the University’s willingness to listen to dissident voices and work towards a fruitful public discourse.

“This is about public debate, due diligence, and now, also, free speech,” he said.