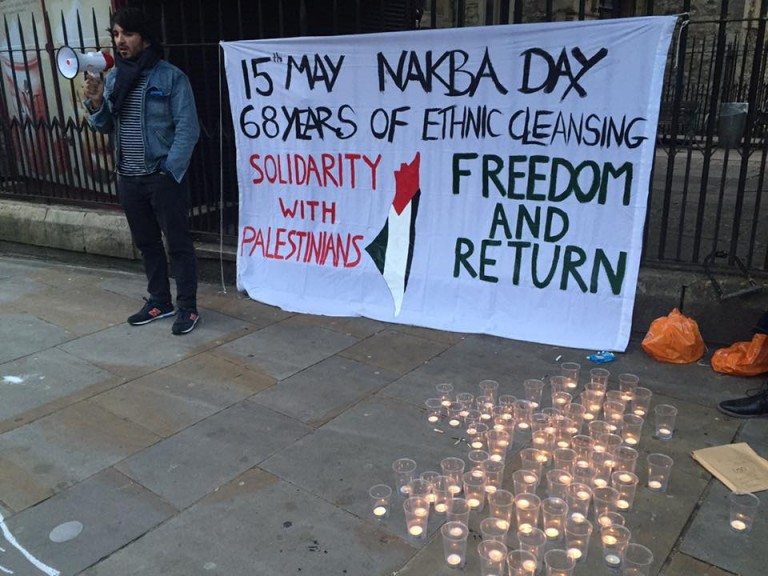 Palestine vigil for ‘al-Nakba’ ends on a sour note

On Sunday, students belonging to Oxford Palestine Society, the Oxford Palestine Solidarity Campaign and Jewish Students for Justice in Palestine, along with many others, commemorated the 68th anniversary of the establishment of the State of Israel in what was previously Mandatory Palestine, under British rule. The commemoration of what Palestine Society referred to as ‘al-Nakba’ – ‘the catastrophe’ in Arabic – was advertised on Facebook beforehand as a show of solidarity for around 750,000 Palestinian Arabs who were uprooted by Israeli forces in 1948 and became refugees, particularly in neighbouring Arab countries such as Lebanon, Syria and Jordan, where they have struggled to find employment and a place in mainstream society.

The commemoration included several students recounting their own experiences as Palestinians who had been affected by the policy of the Israeli state, either directly or through their family. Some other activists made short speeches expressing support for Palestinian right of return for refugees and the establishment of a Palestinian state outside of Israeli jurisdiction. One senior member from Oxford Jewish Students for Justice in Palestine, spoke of his distress at seeing members of his faith commit ‘human rights violations’ against the people of Palestine. The commemoration continued with the reading of the names of 500 villages which were ‘ethnically cleansed by Zionist forces’ as part of the establishment of Israel, to the tune of traditional Arab music played on the Oud.

During the vigil, there were a number of young people, on a visit from Israel, who stood at the back of the crowd that had gathered. Several were soldiers from the Israeli Defence Forces, which have had a controversial history of hardline tactics during the 2008 Intifada as well as the division of Palestinian land with border fences and barbed wire. One spoke to The Oxford Student, asking if many pro-Palestine events happened in Oxford, and ‘Is there an Israeli side to the story?’; he was concerned about the safety of Jewish students at British universities, in the face of left-wing and pro-Palestine activism, which has been wracked by recent allegations of endemic anti-Semitism. The group also asked several people directly if they opposed the existence of a Jewish state; one observer was told “you’re German, you should know that Israel has a right to exist”. The Israeli students were present along with several British students who campaign for wider recognition and acceptance of the state of Israel.

At the end of the vigil, just before the leader finished speaking, one of the students began calling for the observers’ attention, asking them to listen to ‘a different perspective’ on the Nakba and the wider conflict between Israel and the Palestinians. Despite being discouraged by the other pro-Israel students, he continued to talk over the leader of the vigil, only to be rounded on by the observers, who called him ‘disrespectful’ and ‘inappropriate’. Many observers stated that it was not the right arena in which to express his views. A fellow pro-Israel student attempted to calm the situation down, eventually leading the students to withdraw from the pro-Palestine crowd. Several observers were visibly upset afterwards.

The Israel-Palestine debate has been salient at Oxford for some time, with pro-Palestine activism having a long history and major presence on campus. The smaller pro-Israel movement, led by Oxford Israel Society, has traditionally offered the opposite perspective.

Pro-Palestine protests are common at the University, with activism taking the form of supporting the Boycott, Divestment and Sanctions movement and opposition of Zionist politics, a viewpoint for which newly elected Malia Bouattia has faced backlash amidst allegations of anti-Semitism, a problem into which the Labour Party has also launched an internal enquiry.