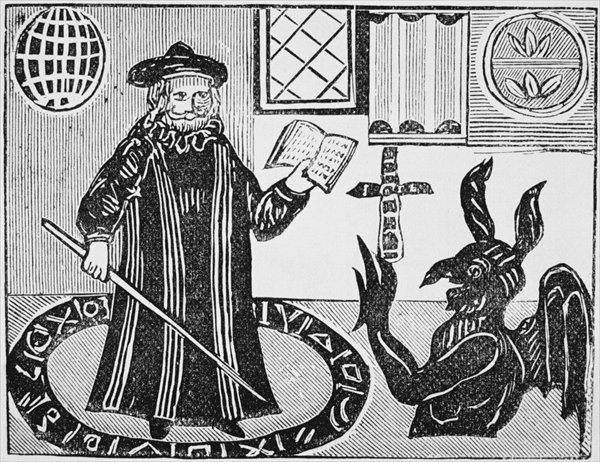 Doctor Faustus, I have come to realize, is a deeply odd play, and not only because of its age. Poet Christopher Marlowe’s writing is, superficially, similar to Shakespeare’s, but it is, in a sense, both less memorable and more learned, featuring lengthy sections of Latin, especially in the speech of the eponymous character, and large set-piece scenes which, I suppose, must have been some sort of reflection of the famous Elizabethan taste for spectacle. It’s also an extremely well-travelled play: the scene shifts from Wittenberg to Rome and back again, taking in any number of places in between, from a village tavern to the Emperor’s court, and it is deeply tempting to assume that Marlowe’s famously eventful life (he died in a pub brawl in Deptford, and was – possibly – an international spy) has, in some sense, spilled over into the play on which his reputation largely rests.

That play, however, is really two plays, because of the sharp dichotomy in subject-matter and linguistic register between the serious scenes featuring Faustus, Mephistopheles, and the deeper problems of metaphysics, and some almost-farcical moments featuring wooden legs, innuendo-filled dialogue, and, often, Faustus’ incompetent servant Wagner (given a delightfully sassy reading here by Amy Perkis). What this means for a director, therefore, is that it can all too easily dissolve into a series of apparently loosely-connected scenes, difficult to stage and tedious for the audience. Fortunately, not so here: as soon as I sat down to watch the cast warm up for their run-through, I could feel a tremendous sense of energy, combined with a determination to do justice to this great, if flawed, work, which filled me with a sense of keen anticipation even before the play had begun.

Although it was not a dress rehearsal, so I had no sense of what the costumes might look like, it seems that director Cai Jauncey has chosen not to adhere to a strictly Elizabethan production aesthetic – not in itself a bad choice, seeing as the legend of Faust(us) is, in origin, Medieval. This modernization of some elements allowed for an interesting satire of Faustus as a modern scholar, using both books and a laptop to conduct research; one touch that I particularly enjoyed was the transformation of the magical book given by Mephistopheles to Faustus, in which is supposedly contained all of the knowledge which the latter might wish to obtain, into a tablet.

In fact, Jauncey’s direction was characterized above all else by this proliferation of thought-provoking tweaks and little jokes, with Marlowe’s words left largely intact, and no kind of alien ‘concept’ imposed: this production looks to be deeply thoughtful, and respectful of the original, but never unduly reverent. I had never imagined Faustus as a woman, but Georgie Murphy was excellent – by turns comic, earnest, and frightened – and I very much enjoyed the heavy hints of flirtation between her Faustus and the Valdes of Alex Christian. The two Angels (Good and Evil), who function as a sort of ever-present reflection of Faustus’ inner conscience, but who are extremely difficult to integrate into the action, were dealt with well, constantly whispering to each other and gossiping about the events taking place before them. Another performance I particularly enjoyed was the delightfully creepy Mephistopheles of Thea Keller, who slinks calmly on and off stage, often holding Faustus’ attention by a mere whisper; this Mephistopheles, however, was a fully-rounded character, and even grew a little sentimental when speaking of the delights of Heaven, from which he is now permanently barred. Even though I was watching a run-through in a very un-theaterlike room at LMH, I was absolutely gripped by the Mephistopheles/Faustus scenes, and I can only imagine how effective they will be at the O’Reilly.

Before concluding, it would be unfair of me not to mention the choreography, with a team of seven excellent dancers who weave in and out of the action in a very effective fashion. I was particularly impressed by the way in which Faustus has been integrated into some of these routines, with Georgie Murphy (somehow!) managing both to slot into these demanding set pieces and to continue to act out the confused sense of delight experienced at that moment by her character. Don’t come expecting cheap gimmicks: the production is subtle, exceptionally well cast, and has a number of genuinely interesting points to make about Marlowe’s fascinating yet perplexing masterpiece, and the whole hangs together so well as to make this audience, at any rate, forget the fundamentally disjointed nature of the actual play.

Dr Faustus will be performed in the Keble O’Reily from 26th-29th May, tickets available here.