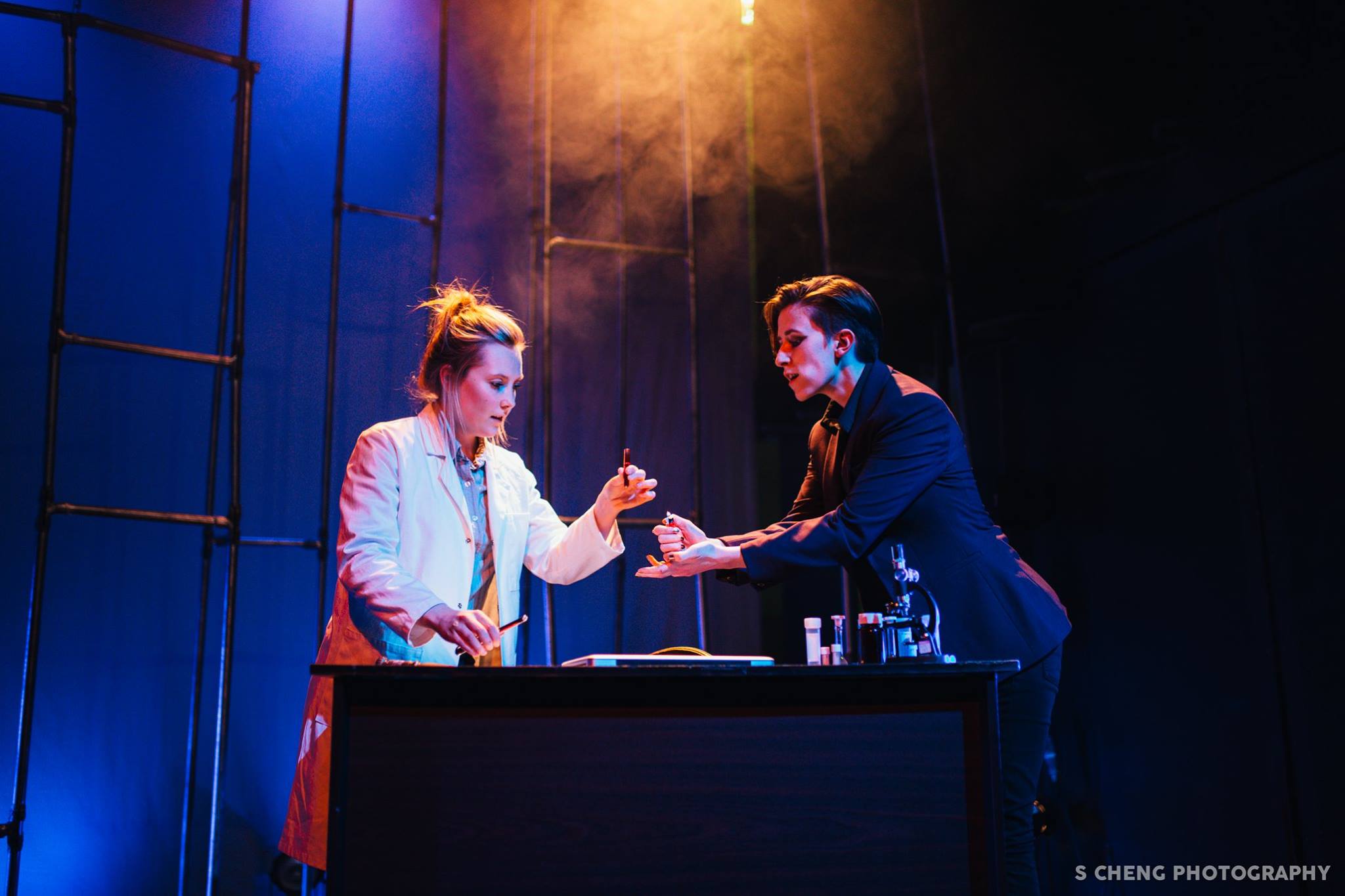 Dr Faustus is an eerie play, of that here is no doubt, and this production of it gave a masterclass in atmosphere. From the moment you step down into the Keble O’Reilly’s cemented and unforgiving space showed off with stark brutalism, you know you’re in for one hell of a hair-raising ride.

Georgie Murphy’s manic Faustus is a curious role to play, and a hard one to make sympathetic. Murphy plays Faustus as a man with a dangerous fixation for understanding; at turns possessed with a fervour bordering on the fanatic and then suddenly possessed of an almost childish glee at the knowledge his demonic lackey Mephistopheles provides him with. ‘It is magic that has ravished me’ Faustus declares at one point, and it is indeed as if Faustus is in love with all that the demon has promised him, too blind to spot the warning signs until he has no choice but to face the path laid by himself. Faustus’ moments of human sincerity and introspections were served well by the kind of stage presence that Murphy has; her character was the most utterly human and yet strikingly obsessive of the production, a difficult balance to strike given the mirror-like inhumanity of the other roles.

Mephistopheles was a class act, whose slinking and sleek exterior of polished impassivity is occasionally broken by some level of total anguish. I found Mephistopheles’ reaction to the final scenes particularly interesting. Given in many ways the ambiguity of the character Thea Keller’s sensitive portrayal was a real show of the expert acting we get access to in Oxford. This portrayal was undoubtedly one of the highlights of my Oxford drama term and a true work of art by Keller. I eagerly look forward to seeing more of his work.

The softly burred Australian Lucifer (played by Charles Pidgeon) presented the cast and Faustus with exactly the kind of charismatic menace necessary to play the Devil incarnate. I was particularly enamoured with the physical portrayal of the supernatural Mephistopheles and Lucifer; given how heavily this play lent emphasis to the movement of characters with the incorporation of dancers, the measured and slightly unnatural way both Mephistopheles and Lucifer used their bodies suggested that these were not creatures used to being so confined by corporeal forms. A clever choice indeed.

The sassy and yet slightly awkward Wagner that Amy Perkis depicted was an almost too innocent counterpoint to the darker and more twisted desires of Faustus and his hellish cohort. Overall however I’d say that the entire ensemble complemented each other enormously. I particularly enjoyed Matt Roberts and Miranda MacKay’s turn as the comic relief in what could otherwise have been an unrelenting play, their obvious teamwork as a witty repartee double act had all my fellow audience laughing.

The decision to incorporate dancers into the production was a bold one, and having yet seen the production I was somewhat sceptical. Dance in the already claustrophobic space of the O’Reilly seemed an unusual decision. However, all power to the production team for I genuinely believe the dancers were not only a charming embellishment but also became an integral part of the play. Dancers wending their way round the stage in hardly recognisably human forms add a supernatural element to the play that you can see played out before you. With a play such as Dr Faustus that contains such lengthy philosophical dialogues and dense Latin references it was undoubtedly refreshing to see the temptations of Faustus laid out in bodily form. The music of the production was also worthy of note; scary synths and chaotic rhythms lent a sense that all was not as it seemed and added to the creeping foreboding of the piece that crescendoed with the finale.

One of the major themes of Faustus is that of ownership; who owns what, who has what power over whom, how is that power and ownership displayed and what use does it serve when one is finally facing down death? What use is knowledge in the face of powerlessness, what use is knowledge when faced with the wrath of god? The play tackles all these questions and does them great credit. The production team have evidently worked hard at creating a performance that is both slick and sympathetic. Stylish, minimalistic and intellectually brutal, Dr Faustus is not to be missed.

Dr Faustus will be performed in the Keble O’Reily from 26th-29th May, tickets available here.