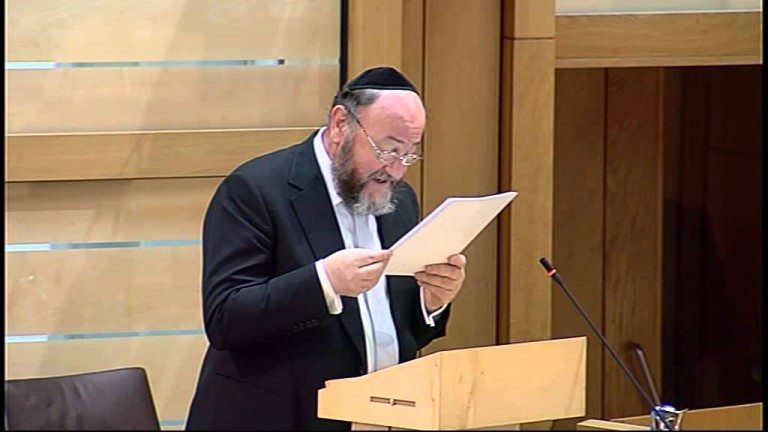 On Monday 23rd May, the Chief Rabbi of the United Hebrew Congregations of the Commonwealth, Ephraim Mirvis, appeared at the Oxford Union to speak to students on the matter of Judaism in the 21st century. The Chief Rabbi’s talk, and subsequent dialogue with students, encompassed topics including religious responsibility, community engagement, and tolerance in the face of rising anti-Semitic sentiment in Britain.

The Chief Rabbi’s visit follows a wave of recent allegations of anti-Semitism against British university students, including members of the Oxford University Labour Club (OULC). Alex Chalmers, former chairman of OULC, resigned in February after the Club voted to endorse Israel Apartheid Week,  a movement which Chalmers said has “a history of targeting and harassing Jewish students” and “inviting anti-Semitic speakers.” The Club’s vote, for Chalmers, was the culmination of a systematic display of “intolerant tendencies” towards Jews.

In past weeks, Oxford University students have also been embroiled in the controversy surrounding similar allegations of anti-Semitism against Malia Bouattia, president-elect of the National Union of Students (NUS). Concerns about Bouattia’s past anti-Zionist rhetoric led to the Oxford University Student Union (OUSU) withdrawing support for Bouattia in April, and to OUSU’s decision to hold an upcoming referendum seeking the University’s disaffiliation from the NUS.

In his speech on Monday, Chief Rabbi Mirvis addressed both recent situations at Oxford, as he discussed the growing prevalence of anti-Zionism around the world, and the threat that it poses to Jewish identity and Judaism itself. Whereas Malia Bouattia, among others, has sought to differentiate anti-Zionism from anti-Semitism, the Chief Rabbi noted that Zionism and Judaism are intimately connected—and therefore, their oppositional movements are also necessarily related.

“Zionism is a reflection of Judaism. Zion is a reflection of Jews,” he said. “The Zionistic bond between Jerusalem and the state of Israel and the Jewish people is something which represents our spirituality; our religion; our connection with God; our past; and also our future.”

A well-known advocate of interfaith collaboration, the Chief Rabbi emphasized that inclusivity and acceptance begin with an informed understanding of Jewish historical identity.

“The modern-day Zionistic movement…was a response to the need for the Jewish people to have a state of their own at a time of increasing anti-Semitism in Europe,” said the Chief Rabbi. “Zionism today is best defined as the right of the Jewish people, like all peoples, for self-determination in our own homeland within secure borders.”

“Therefore, if one accepts this definition, which is the definition that most people hold, that whole notion of anti-Zionism amounts to an attack on the Jewish people.”

Throughout his speech, Chief Rabbi Mirvis continually returned to the concept of Judaism as “a prescription for meaningful existence,” and as “a template for meaningful and joyous life.” Part of that template, he noted, is the importance of the idea of community, both within and beyond Jewish circles. Anti-Semitism is a barrier to the ability of such communities to thrive, and its expansion in Europe is a development that the Chief Rabbi calls “lamentable.”

“We’re seeing in Europe, and here in the UK as well, an increase in anti-Semitic sentiment and activity. And one is saddened to read the essence of the report of Baroness Royall, concerning the Oxford University Labour Club and the events that have happened here on this campus,” he said.

Baroness Janet Royall, who conducted an inquiry into OULC following the allegations of anti-Semitism in February, issued a report this month saying that she had found no evidence of “institutional anti-Semitism” within the organisation—though she has noted that there is a “cultural problem” within the organization concerning the treatment of Jewish students, and “clear incidents of anti-Semitism.” She emphasized the need to take action to change that situation, a sentiment which the Chief Rabbi also expressed on Monday.

“Anti-Semitism is not just another form of racism. It is a threat not only to Jews, it is a threat to all of our society, and we as a society must respond to it in the strongest possible way,” he said. “I personally am outspoken about the need for an adequate response—on our campuses and throughout our society.”

Asked directly about the election of the new NUS president, the Chief Rabbi called Malia Bouattia’s election “a development which I think is highly regrettable.”

“I think it’s a reflection not only on her views, but also on the views of those who elected her to that role,” he said. With regard to disaffiliation from the NUS, he stated, “I leave it up to the Oxford student union to decide its future.”

Regardless of how the situation is addressed, “all reasonable people,” the Chief Rabbi said, should recognize the need to take sufficient action against anti-Semitic sentiment and behaviour.

“I’m sure you join with me in recognising that there can only be zero tolerance towards all anti-Semitism, here in Oxford, on all campuses in this country, and indeed, within our society at large.”