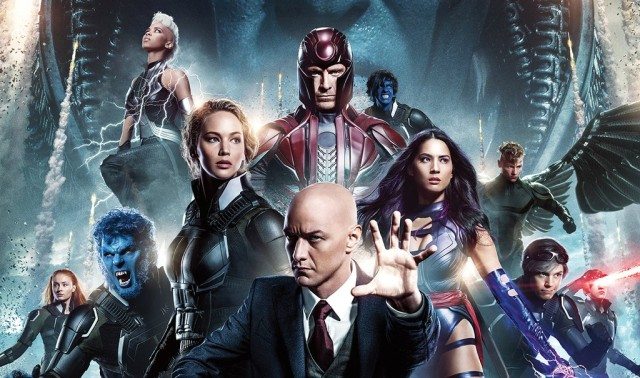 After the fun breath of fresh air that was First Class and the madcap time-travel antics of Days of Future Past, X-Men: Apocalypse is competent but ultimately disappointing, content to spin its wheels rather than moving the franchise forward in any discernible way, repeating what we’ve already seen before and falling back onto weightless CGI nonsense far too often.

The plot picks up on the story of the mutants in the 1980’s, with new and old faces uniting against the threat of über-powerful ‘first mutant’ Apocalypse (Oscar Isaac), who plans on destroying the world (because of course he does). Despite making a convincing case for being the world’s most charming man in the latest Star Wars, Isaac is given nothing to do here, spending most of the film plodding around the world choosing his ‘four horsemen’ whilst spouting boring pseudo-profundities through 50 layers of voice modulation. Speaking of his horsemen, they’re comically underused apart from Michael Fassbender’s Magneto, spending most of the runtime awkwardly standing around in the background trying to look important and then getting five minutes of inconsequential action at the very end.

It speaks to a larger issue within the film itself, as it feels far too overstuffed with adequately played characters whom the filmmakers don’t quite know what to do with. Civil War almost suffered from this problem, but there was always a sense that the writers knew what made each character work uniquely and utilised them in interesting ways. There’s a lot of rehashing of old ground in Apocalypse, with McAvoy and Fassbender’s previously electric chemistry boiled down to the same  old melodramatic debate they’ve been having for the entire franchise (“Mutants can integrate!” “No they can’t!”) and yet another subplot about boring young mutants struggling to control their powers in a way we’ve seen in every other movie, just without the novelty of the original or the verve of First Class.

But who cares about characters, right? We’re just here to see a bunch of superheroes punch each other in increasingly preposterous ways. Well if there’s anything that Apocalypse proves, it’s that bigger doesn’t always equal better. There’s a conscious effort to ramp everything up to 11 (If the subtitle ‘Apocalypse’ hadn’t given that away already), with the destruction elevated to the point of ludicrousness, with entire cities destroyed with nobody batting an eye. There’s some fun to be had in the big mutant scrap at the end with everyone battering each other with their various flashy powers, but Singer remains a subpar director of action and there’s nothing that comes close to the creativity of Civil War’s airport scene, meaning you’ll probably be bored by the end of the overlong 144 minutes. Like DOFP however there’s one fantastic sequence using Evan Peters’ super-fast Quicksilver, set to 80’s classic ‘Sweet Dreams are Made of This’, which manages to be funny, exciting and hugely inventive, a sign that there’s perhaps life in this franchise yet.

Apocalypse is by no means terrible, but it’s not worth shelling out 10 quid for a ticket on. It has some fun with its 80’s setting, the performances are for the most part fine and fans of the franchise will doubtless be excited by its plethora of characters, but when compared to previous entries it’s an underwhelming and messy disappointment.