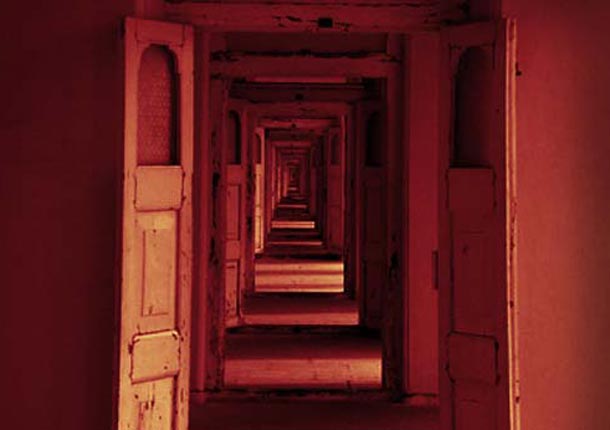 No Exit – A review

Three characters, Inéz, Garcin, and Estelle, are in hell. And where is hell, you may ask? Hell turns out to be a stuffy “second empire drawing room” with no way out. There are no conventional devils, or instruments of torture, but instead the trio are doomed to become one another’s torturers. The intimate space of the Burton Taylor studio was well matched to the vision in this production, with the audience surrounding the set almost forming the walls of the room. Red lighting on the back wall gave just an inkling that the space might represent a traditional hell, which was a nice touch.

There are unique challenges associated with putting on a play with only one scene, as the majority of No exit is simply a dialogue between the three characters. See, Sheehan and Reimer rose to this challenge admirably, delivering their own monologues which allowed us to get a greater sense of their character’s pasts, and then rapidly switching into discourse with one another that ranged from seductive to threatening to downright aggressive. Apart from a couple of stumbles over lines on opening night, this performance was extremely slick.

Nils Reimer’s performance as Garcin was excellent, as his character’s deliberate woodenness gave way to deep insecurities; gradually over the course of the play his bursts of manly bravado and anger combined with a deep indifference gave his portrayal a complexity that was very well managed.

Estelle was played by Lydie Sheehan. Her monologue on the actions which led her to be in hell was truly excellent, with the fine balance between the character’s absolute vacuity, and her complete indifference towards the impact her actions have had on others.

Jessie See’s Inéz is perhaps the most complex character, and the hardest to relate to. She fluctuates between being seductive, angry, and downright cruel as she attempts to first attract Estelle, and then holds Garcin in the room with the power that she has to judge him as a coward or not. The childlike, almost sing-song way in which she reveals the ways in which she has control over the others merely through her presence was chilling and well done.

For such a dark play, there are comedic elements. In particular, Lianna Holston’s portrayal of the Valet, who shows each character into the room, added some light relief, with an amusing conversation with Garcin about his lack of need for a toothbrush.

I particularly enjoyed the use of the device of the looking glass. Sartre saw other’s worldview as a threat to one’s own myopic perspective on the world. Thus having no looking glasses in hell clearly represents Sartre’s notion that other people’s view is the only thing that can truly give you an objective perspective on yourself. Only being able to see yourself through another’s eyes is, for Sartre, genuine torture. Something really interesting is being expressed when Estelle says “Sometimes, if I can’t see myself, I begin to wonder if I exist”; the cast do Sartre’s philosophy justice, by making their references to the looking glass more than superficial observations.

By the end of the play, I was convinced entirely by the relationship between the three, and the slightly manic laughter of the trio, brought to mind a traditional villain, just hinting once again at the contrast between Sartre’s and our conventional understanding of hell! This was a powerful play whose cast had really got to grips with the complexities of the text.