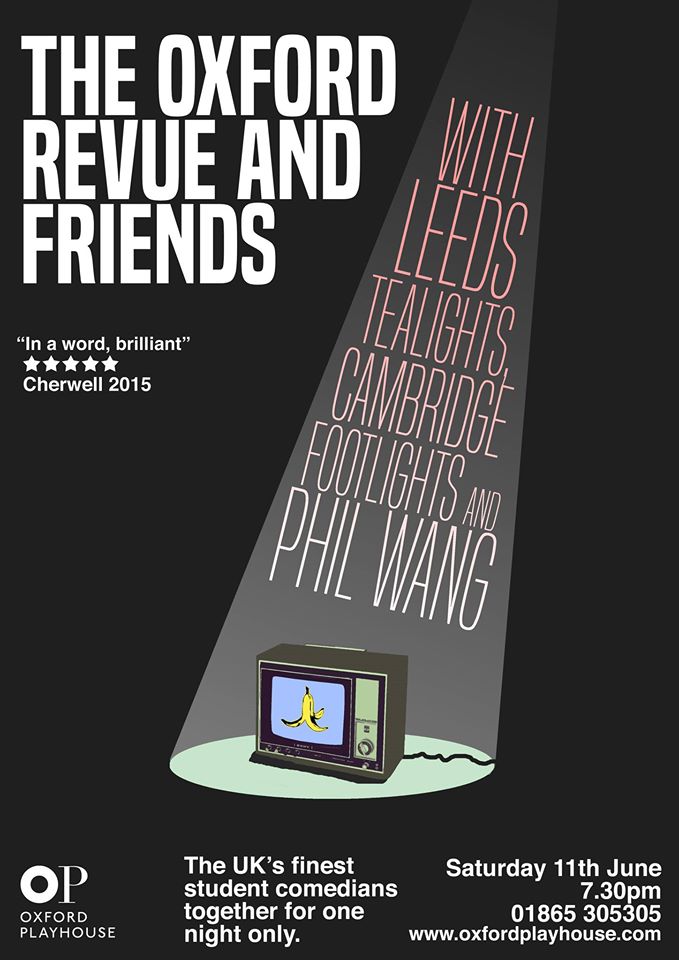 Most Playhouse productions are no laughing matter. Sitting comfortably at the top of the student theatre hierarchy, the Playhouse is a place for high production values and even higher brows. But in two weeks’ time the Oxford Revue, Oxford’s own band of student comics, will be taking to the stage in their annual show, The Oxford Revue and Friends. It sees them teaming up with long-time frenemies the Cambridge Footlights and the Leeds Tealights for two hours of sketches, songs and stand-up, providing a culmination of a year’s worth of shows, and the launching pad for a summer trip to the Edinburgh Fringe. I was able to sit down with Revue co-president Jack Chisnall, who told me about the plans for the show.

“The show is a two-hour extravaganza, everyone is going to show off some of their stuff. There’s an air of competitiveness when you bring all these people together. But it’s really a celebration of student comedy, in all its amateurism, and also the sense that people could take off from this. The format will be two halves. The first half will be the Footlights and the Tealights doing some sketches, songs, whatever they feel like – we give them half an hour each to do whatever they want. And then they’ll hand over to us, the Oxford Revue, for the second half. It’s a chance to really show the kind of smorgasbord of what we did this year, dipping in and out of all the different shows we’ve done.”

“Working with the other troupes, I flatter myself that we all influence each other a little bit. We do a lot of shows together – we’ve met the Footlights three or four times already this year. This kind of show that we’re doing at the Playhouse gets recreated in Cambridge and Durham, and even in Bristol last year. So we see each other a lot – me and Georgia also went up against the Footlights at Varsity this year, so you see each other develop across the three years of your degree. So it’s competitive, in a fun way, but also collaborative. I don’t think we take ourselves too seriously. We all think that we’re going to make it, and that’s daft in its own way.”

“Performing in the Playhouse, well, without getting too precious about it, you’re very aware of the history it’s got. You look at that bruised and battered old stage, and you think , ‘oh, maybe Alan Bennett caused that rupture on the stage, maybe he dropped a heavy prop there’, or ‘maybe that was where Stewart Lee or Michael Palin performed’ It is, traditionally, where the Revue has always done a show. One is aware of the ghosts of the past there, so to speak. You’re aware of the really cool people who’ve performed there before you, and that’s what makes it so incredible.”

“There’s a general sense of being connected. You’re connected to the past, but you’re also connected to people who aren’t students. It’s full of townsfolk – they throw curveballs at you, as a performer. I know what students are going to laugh at, or I flatter myself I do, but you face different audiences when you do the Playhouse, people who don’t share that same set of references. It’s wonderful, because Oxford’s a great city, and you do forget, in a very arrogant way, that it’s actually a thriving town full of very interesting people. For one night a year you get to feel connected to this wonderful history of a city and a history of performance. The Playhouse is this rite of passage for us, and it’s very nice.”

The Oxford Revue and Friends will be performed at the Playhouse on the 11th June. Tickets available here.