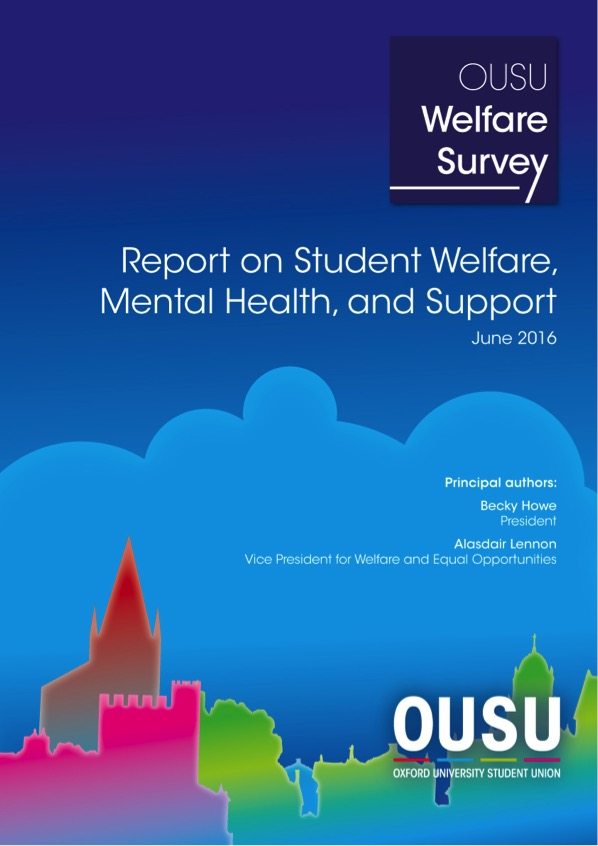 The findings of a comprehensive OUSU report into the welfare of students at the University of Oxford have revealed a significant variance in the experiences of students, and a significant number of students who felt that being at Oxford had impacted negatively on their personal welfare.

There were also significant variations found in the experiences of Black, Asian and Minority Ethnic (BAME) students when compared to those of their peers. BAME undergraduates were one and a half as times more likely to state that they felt overwhelmed most or all of the time compared to non-BAME students. The findings also stated that 17% of BAME undergraduates said that they had experienced discrimination from a fellow student, with 20% reporting that they had felt unwelcome in their college, PPH, or department at least once.

Similar results indicated that LGBTQ students were 1.4 times more likely to have felt overwhelmed most or all of the time when compared to non-LGBTQ students. The survey also received feedback from a number of undergraduate students who identify as transgender. Of these students, 83% said that being a student at Oxford had impacted negatively or very negatively upon their mental health. Of those who did not identify as trans the figure was 53%.

On the experiences of disabled students, the survey reported that disabled and chronically ill undergraduates were twice as likely to state that they had felt anxious most or all of the time, this was also the case for feeling overwhelmed and stressed when compared to non-disabled students.

The responses given to the question on personal welfare were also significantly different. There was a significant gender gap in responses to the question with 38% of men stating that being at Oxford had seen a negative or very negative impact upon their personal welfare/wellbeing, for women the figure was 52%. This gap remained at postgraduate level; the equivalent figures for research postgraduate respondents were 36% of men and 43% of women.

For undergraduate students identifying as LGBTQ, the proportion responding that Oxford had affected them negatively or very negatively was 59%. The equivalent number for non-LGBTQ students was 38%.

The figure for students with a disability or chronic illness was much higher with 63% of respondents reporting a negative or very negative impact upon their personal wellbeing compared to 44% of students who do not.

The number of undergraduate BAME respondents perceiving Oxford to have had a negative or very negative impact upon their personal wellbeing was also higher at 49%, compared to 46% who were non-BAME.

The survey itself is unprecedented in its scope at the University of Oxford, having obtained feedback from 5064 students; 4184 of these being undergraduate students, 602 postgraduate research students and 278 postgraduate taught students. The number of responses to each individual question however varied. The survey itself was part of a campaign pledge made by OUSU President Becky Howe during her election campaign in November 2014.

Speaking about the report, Becky Howe said: “The reason I ran to be OUSU President was to focus on mental health, welfare, and support at Oxford: my aim was to research and write this report. It’s been a huge amount of work but I’m so pleased it’s finished and ready for people to see! It’s been absolutely amazing that nearly 6,000 students took part in the survey – we analysed responses from 4,184 undergraduates, which is 36% of the undergraduate population at Oxford. It’s the biggest survey response we’ve ever had by quite some way, which I think goes to show how important the issues of welfare and mental health are to students. The report gives a detailed picture of welfare at Oxford, but – as far as I know – similar studies, with similar response rates, haven’t been done at other universities yet, so we don’t have anything to compare our data to. I hope it will be useful in informing future policy and practice on welfare, support and mental health across the colleges and University.”

The report also sought feedback on student’s experiences of the welfare support services available for students in Oxford. These results also showed significantly differing experiences depending upon whom the student was. The overall response with regards to the satisfaction of students with the support services however was a positive one.

When broken down in to groups however, gaps emerged in levels of satisfaction. 13% of undergraduate women were unsatisfied with the support that they had received as opposed to 8% of men. For BAME students, the percentage of students satisfied or very satisfied was 43%, for non-BAME students it was 56%.

The most likely port of call that undergraduate students made if they faced a longer-term issue was with their academic tutor (18%), responses to their support were less favourable with 22% stating that they thought that it was very good and 42% rated the support that they received as good.

For graduate students, both taught and research students were positive in their feedback towards the support given by Common Room reps, with 70% and 72% giving positive feedback respectively. Graduate students however were far more likely to speak to their Supervisor if they were facing either a personal emergency or long-term issue, and of these 67% of taught students had a positive experience of support given by Supervisors, with the level of research students giving positive responses at 71%.

On the issue of workload, the survey also looked in to student’s feelings towards eight-week terms. The majority of respondents (45%) felt that terms should be longer with a break in the middle, such an approach has been endorsed by OUSU President-elect Jack Hampton, the next largest proportion of respondents (33%) felt that the current eight week term arrangement allowed them to work to the best of their ability.

A section of the report focused on mental health specifically. Whilst 58% of undergraduate students felt that they had experienced some form of mental health problem in the last year, only 28% had sought support for this over the same time frame. The gap between those experiencing problems and those seeking support amongst the postgraduate respondents was smaller, 37% of taught postgraduate students and 32% of research postgraduates who responded had sought help in the last year.

One of the remaining areas that the survey gathered data from students on was that of access to the support services themselves. Students reported that they were unhappy with the waiting time; this is despite the fact that times on the waiting list for NHS services are likely to be much longer. The counseling service at the University of Oxford remains amongst the best funded at any university in the United Kingdom.

Respondents with a disability or chronic illness also gave feedback that illuminated the degree to which they have accessed university services. 42% of respondents rated the service as either good or very good. There were a similar percentage however that indicated that they did not know, indicating that a number of students were not using the service.

When contacted for comment, a university spokesperson told The Oxford Student: “We welcome this thorough and thoughtful report from Oxford University Student Union. It raises important issues and the findings are already informing the University’s ongoing work on student welfare. In particular, the report will feed into our new mental health policy, which aims to promote positive mental health as well as ensuring we respond to problems when they arise. We also welcome the measured approach OUSU has taken to interpreting the data in the report and will work with them on conducting further research into the questions it raises.’”

Catherine Paxton, Director of Student Welfare and Support Services said: “We are pleased to see the high level of satisfaction with the Disability Advisory Service.  We also know that the central University Counselling Service is highly rated, with 95 per cent of users rating it ‘good’ or ‘very good ‘ in our most recent student evaluation.”

The report in its entirety will be sent out to all students as part of the President’s newsletter on Friday 10th June.