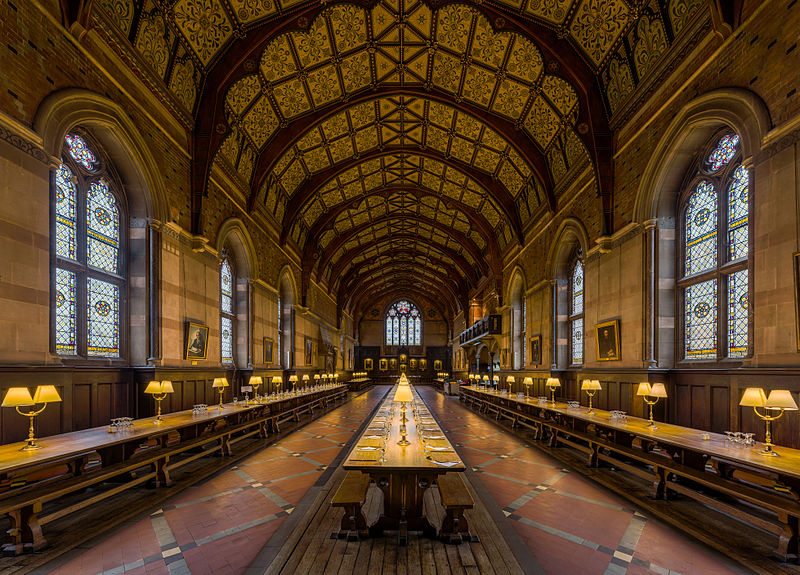 How is it that the homeless go hungry whilst, away from the streets, satisfied students leave plates of food that never get eaten? In this article I will attempt to answer this question, which has angered me since my arrival in this city so dominated by class divides.

My own college’s ‘hall’ can be seen to be emblematic of this problem. Everyday meals are left barely touched and are subsequently thrown in the bin in the kitchen that backs on to Brasenose Lane, home to a rough sleeper. The food being disposed of is of a high quality, ranging from an untouched slice of lemon tart to a picked-at guinea fowl. The idea of ‘guinea fowl’ alone conjures up an image of privilege, an image that is broadened and also darkened by the fact that it is not even consumed by the privileged few, but disposed of instead, most probably because the student ‘eater’ does not have room for it after their large lunch or that scone they should not have eaten mid-afternoon.

As much blame that can be put on to the individual can equally be placed on the college and their overly traditional eating arrangements. Many college ‘halls’ offer a set price for three courses, one that cannot be wavered if you eat less. This means that if I only wanted the main course of a meal I have to let them place a starter and a dessert in front of me only to not eat them. This is way too hard a feat for me, and I end up eating all that is in front of me more out of lack of restraint than anything else. However, those who can stop themselves eating the chocolate sponge or the creamy tomato soup may be helping their waistline but simultaneously being wasteful. A way to avoid this would be to check the hall menu before going to make sure that you like everything that is being served. This would undoubtedly solve the issue of dozens of plates of fish being taken away hardly touched by those who pride themselves on not liking, and never liking, fish. Nevertheless, you cannot blame students for turning up to dinner in college even when they know they will not like a key component of the meal: hall is easy and relatively cheap compared to the rest of Oxford’s dinner options.

I know that many colleges have more of a canteen-style food system which allows people to pick from various meal options and that they therefore are not made to have three courses. However, I do not think more traditional colleges should replace their current hall with this canteen system as I think there are ways in which the traditional style of eating can be maintained whilst food waste can be reduced. One way of reducing food waste would be to publicise menus more openly so people can make educated choices as to whether they want to eat in hall or not. A booking system for those only wanting to eat a main meal would also be a step in the right direction – only this way will the kitchen make less starters and desserts.

I do not think, however, that food waste can ever be eradicated in Oxford. The very nature of hundreds eating together at optional dinners means that waste is unavoidable. Therefore, the way we deal with the waste needs to be improved. There is a huge demand for food among the growing homeless population in Oxford. It seems the perfect solution would be for there to be an organisation that gave out untouched meals from colleges’ hall dinners. This would be a win-win situation. The students would have more control over their diets and the homeless would have healthy and freshly cooked food to eat.

This sort of charity organisation would of course be difficult to set up, due to food hygiene laws and the like. Nevertheless, I do not think it is outside the realm of possibility for something like this to exist. The more people hear about the issue the better. I for one know that once you notice the food waste it is impossible to ignore it. I intend to enjoy the last few meals Trinity Term has to offer but with the issue of food waste remaining at the forefront of my mind as I do so. I hope people follow suit so that this problem starts to be taken seriously and steps can begin to be taken to help reduce the waste our privileged existence produces.