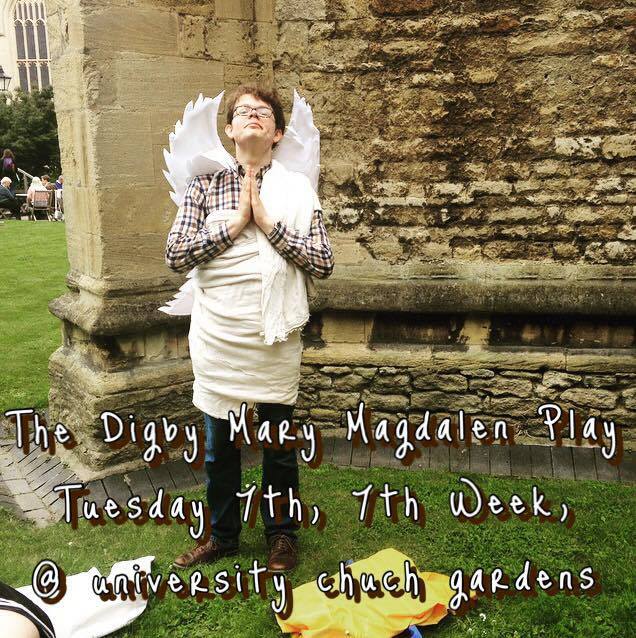 The Digby Mary Magdalen – A review

One may well have certain expectations when going to see a garden play at the University Church on the life of Mary Magdalen. Whatever they may be, this late afternoon of theatre would not meet them. And that is precisely the merit of this production.

It was a truly refreshing way of handling a difficult theme and text. Editing and cutting a fifteenth century script, which in the original would have taken some 3 hours to perform, director Olivia Robinson has managed to bring it to just the right length and appropriately light mood. As medieval English tutor at Brasenose College, she had assembled a cast mainly consisting of Brasenose students, who were all clearly on board with the idea behind the production.

That idea, as this reviewer understands, was to embrace the parodic, exaggerated, but powerful polarity between good and evil, black and white with no grey area whatsoever. A member of the cast put the point crudely: ‘There simply is no nuance here.’ Yet by bringing this polarity out into the open the production gained an almost ironic distance from the fifteenth century original, and so developed its appeal.

Paying testimony to the enormous popularity her cult enjoyed in the middle ages, this play follows the life of Mary Magdalen, from prostitute to apostlesse (the fitting neologism applied at the end). Of course, everything starts with sin, with the devil and his companions who lead the heroine astray into sexual delights. Her ultimate return to the good life and to faith, sparked by the resurrection of Jesus, kicks off her story as a preacher and eventual saint.

Pure evil and pure good are thus juxtaposed, with Mary herself thrown into sharp relief as she wavers between the two. Fleur Snow in the lead role did justice to what was arguably the only character whose psychology offered any complexity. Her chanting of medieval liturgical verse made for moments of brief but genuine serenity, offering the audience a chance for reflection.

Jack Spiezio deserves particular mention for his brave rendering of a consistently comic but not ridiculous King of Marseilles, who takes on a sort of leading role in the second half of the play. When Mary first encounters him he is boisterous and voracious, traits familiar to Mary herself, and eventually he becomes the paradigm of the converted man, won over by the wonders of Christ. His faith is tested by a blow of fortune, in the form of his wife and child’s death, and he overcomes this crisis by his own baptism to eventually see them restored to life by Mary Magdalen herself.

Again we have the wonderful simplicity of good and evil – the former winning over the latter – which this production embraced so willingly and wholeheartedly. The entire cast is to be commended for the light-hearted mood of the play, which in the most religiously critical scenes had to walk the fine line between blasphemy and naivety. Particularly poignant examples of these were of course the appearances of Jesus, played by William Bunce, and his angel Gabriel, played by David Sargent.

This reviewer couldn’t help but wonder how a medieval audience would have liked to see such figures, or even the disciples Peter and Simon, embodied by William Shaw, staged with such considerable irony. Peter in particular, who acquires a supra-temporal presence when he features as Pope opposite the king of Marseilles, leaves open the question of whether any nuance at all would have been intended for the play’s first audience.

The mastery of the text and some cues may have left some room for improvement and the fourth wall was unstable to say the least. This may be criticized. Yet, for this reviewer’s taste, it was a refreshing experience to see actors genuinely grappling with a more than difficult script. The peculiarities of Middle English, especially in terms of rhyme, were rendered to some extent in modern verse, although the director’s concern clearly – and rightly – lay with presenting an understandable, rather than academically accurate text.

True to the spirit of a garden play, the Digby Mary Magdalen made the most of a difficult theme, by giving an exaggeratedly superficial life story. Being deliberate, however, this superficiality did not diminish the enjoyment and understanding of the play. Any other take on this text would have likely been a failed attempt at forcing medieval sentiments into the 21st century.