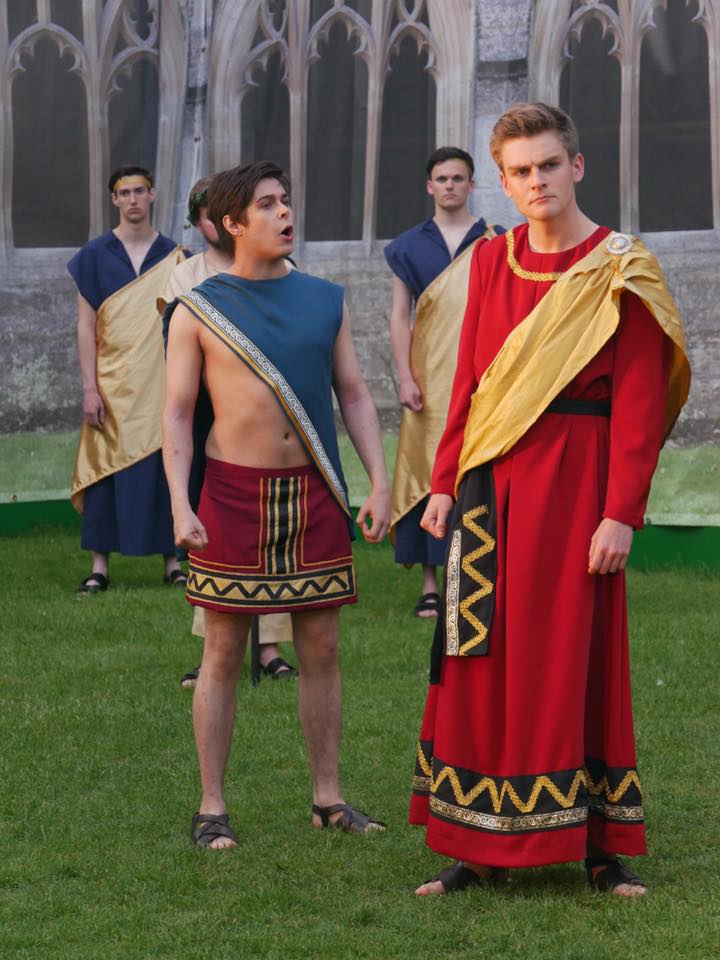 Antigone is the latest in a series of Greek tragedies put on in the New College Cloisters and directed by David Raeburn. His artistic vision and sense of exactly how he wanted to convey the original text were evident throughout. This year’s play followed on nicely from last year’s Oedipus Tyrannus, for those who had seen both. The tale comes after the death of Oedipus, and the subsequent death of both of his sons at the others’ hands, and follows his daughter Antigone, as she defies the new King of Thebes, Creon, who has ordered that one of the brothers, Polynices, may not be buried. The proper burial of a relative is a duty that comes from the Gods.

The performance as a whole was very slick, and the costumes were high budget, which added to the overall effect. The setting of the play in the New College Cloisters was also effective, since even though they were dressed up in Scaffolding, they have the grandeur that makes them believable as an ancient Greek palace. Melodrama was evident in the performance and although this is not necessarily something we are used to in the Oxford Drama scene, it was something that was intended to be an authentic reflection of the original Greek dramatic style.

The play takes its actors from two groups only, members of New College and students of Classics. This creates an amalgamation of those who have more acting experience and those who are newer to it. However this year, I don’t feel this showed. Jasmine White, as Antigone, had a difficult task to portray a character who was straightforwardly defined by a conflict in her duties and seemed to lack other dimensions. She expressed the dilemma her character faced in having to defy the ruler of the land and bury her brother with seriousness and a sense of the tragic, observing “my crime is religious duty”. Her lament as she goes to her death, was helped along by Liz Jones’ music, which brought out the different changes in the mood of the lament, from anger to resignation, which can often get lost in translation. White’s anger as she went to her death was moving. There was more to the character of Creon, whom Edward Grigg managed to make almost endearing in his pomposity and authoritarianism at times, but also his hubris was clear from the start to the audience. It was enjoyable to watch the character evolve and become increasingly set on insisting that his edicts be followed. Harry Samuels’ portrayal of the guard whose job it is to watch Polynices’ body was genuinely funny and added some light relief to the performance before tragedy began to strike. “I’m off the ‘ook” he told Creon, as he brought in Antigone, caught performing her brother’s funeral rites. Daniel Haynes’ portrayal of Haemon was convincing as a headstrong youngster who defies his father’s edicts for love of his betrothed. He began with slick flattery but gradually lost control as his father refused to budge on Antigone’s sentence. Thomas Kelly’s Tiresias held the room, as a quavering old man with spiritual authority. It is his entrance that finally convinces Creon that he ought not to have defied the will of the Gods, and the righteous anger towards the defiant king was pitched just right. Finally, Thomas Ames was excellent as the messenger who brings the news that draws the play towards its dramatic conclusion. As he reveals the tragic events that have unfolded his use of physical drama really brought the events that the audience do not see to life.

The nature of Greek tragedy is somewhat different from the nature of a contemporary play. Raeburn describes Greek Tragedy as the marriage of two art forms; the recitation of Homeric stories, and prayer-like choral hymn singing in honour of Gods and heroes. This version of Antigone endeavours to closely follow this original form and style as much as possible. Says Raeburn of classical texts, “In order to begin to find the timelessness, you want to see, if you can, what they meant originally”. For this reason, the lyrical poetry component was clearly differentiated from the storytelling through the chorus’ lyrical chanting in an “approximation to the original Greek Rhythms”. Liz Jones’ musical score, written to chime in with this rhythm, was fantastic. It didn’t overwhelm the choral poetry but gave it another dimension, making it more like a religious chant, at times ecstatic. The music and poetry worked to carry the performance forward and create an emotional atmosphere, something especially significant in the setting of the Cloisters where this cannot be achieved with lighting or other technical effects that one might use in an indoor performance. I was occasionally unsure about the choreography of the chorus; raising their arms above their heads in unison seemed to add little to the story that they were telling. However, through their speech, the chorus created the atmosphere of transcendence that really worked. The chorus are used to put across ideas that are essential to Sophocles’ thinking; the message of the play is ultimately that we cannot ignore the realm of the Gods. In this sense, as director David Raeburn observed, although we never see any Gods on stage they are crucially important, and perhaps all the more so because we do not see them. It is thus down to the chorus to convey the importance of paying them credence, and I think they succeeded at this task admirably.