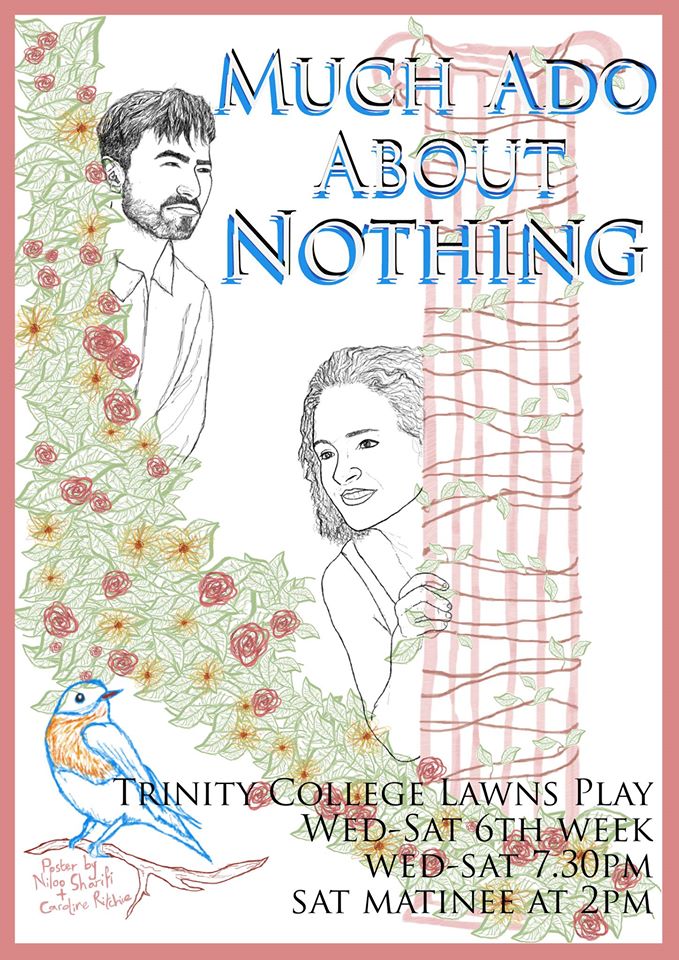 Much ado about nothing – A Review

This year’s Trinity Lawns Play marked the return of Megan Slattery to the director’s chair, who on this occasion was accompanied by Bishan Morgan.  As someone who had not previously seen Much Ado About Nothing, I was anxious that I would find it difficult to trace the contours of the plot and language.  But that anxiety was thankfully not realised, as Slattery and Morgan combined effectively to craft a performance that was both enjoyable and well executed.

Much Ado is a story of love, court politics and intrigue.  Set in Messina, it portrays the love affair of Beatrice and Benedick, who both at first claim that they will never marry, as well as that between Claudio and Hero.  The programme notes informed the audience that Morgan’s first experience of Much Ado was whilst studying for his GCSEs.  He remembered being ‘titillated by the play’s bawdiness’ but nonetheless was able to relate to the ‘adolescent reluctance to admit to love, and consequently appear weak and foolish’.  Fortunately Morgan’s directing of the play went beyond that of a mere school boy, as both he and Slattery were able to draw out its emotion and love.  A minimalist but effective set allowed the audience to hone in on the actors’ words and actions, and achieved a real intimacy.  Similarly, the simple costumes quietly reinforced the theme of masculine identity vis-à-vis virgin purity.

The quality of the set was equalled by that of the acting.  Helen Record brought a real energy and enthusiasm to her role as Beatrice, expertly playing the superficially combative and disparaging, but ultimately sensitive, lover of Benedick (Daniel Thomson).  Thomson did well to illustrate the teasing nature of Benedick’s relationship with Beatrice, and interjected her aggression with a welcome light-heartedness.  Alec Fullerton and Michael Jacobs as Don Pedro and Leonato respectively managed to bring a quiet self-assuredness to the play while Loris Raimo, in his acting debut, performed Don John admirably.  Oli Williams (Dogberry) and Freddie Hopkinson (Verges) worked excellently together (despite the fact that the latter still has room for improvement), particularly when Verges appeared to stroke Dogberry, complete with groans of affection.

The performance was not without fault, however.  It might be wondered whether the expressive miming at the beginning of the play went slightly too far, or if a few minor, practical errors, such as actors turning their backs to the audience, and speaking too softly, could not have been eradicated during rehearsal.  But these are very small criticisms indeed in what was otherwise another highly successful Trinity Lawns play.  Despite the decidedly grim weather, the actors managed to capture the vicissitudes of the love stories, as well as to retain the audience’s interest and laughter, bringing to life Shakespeare’s exploration of the emotional complexities of the daily human experience.