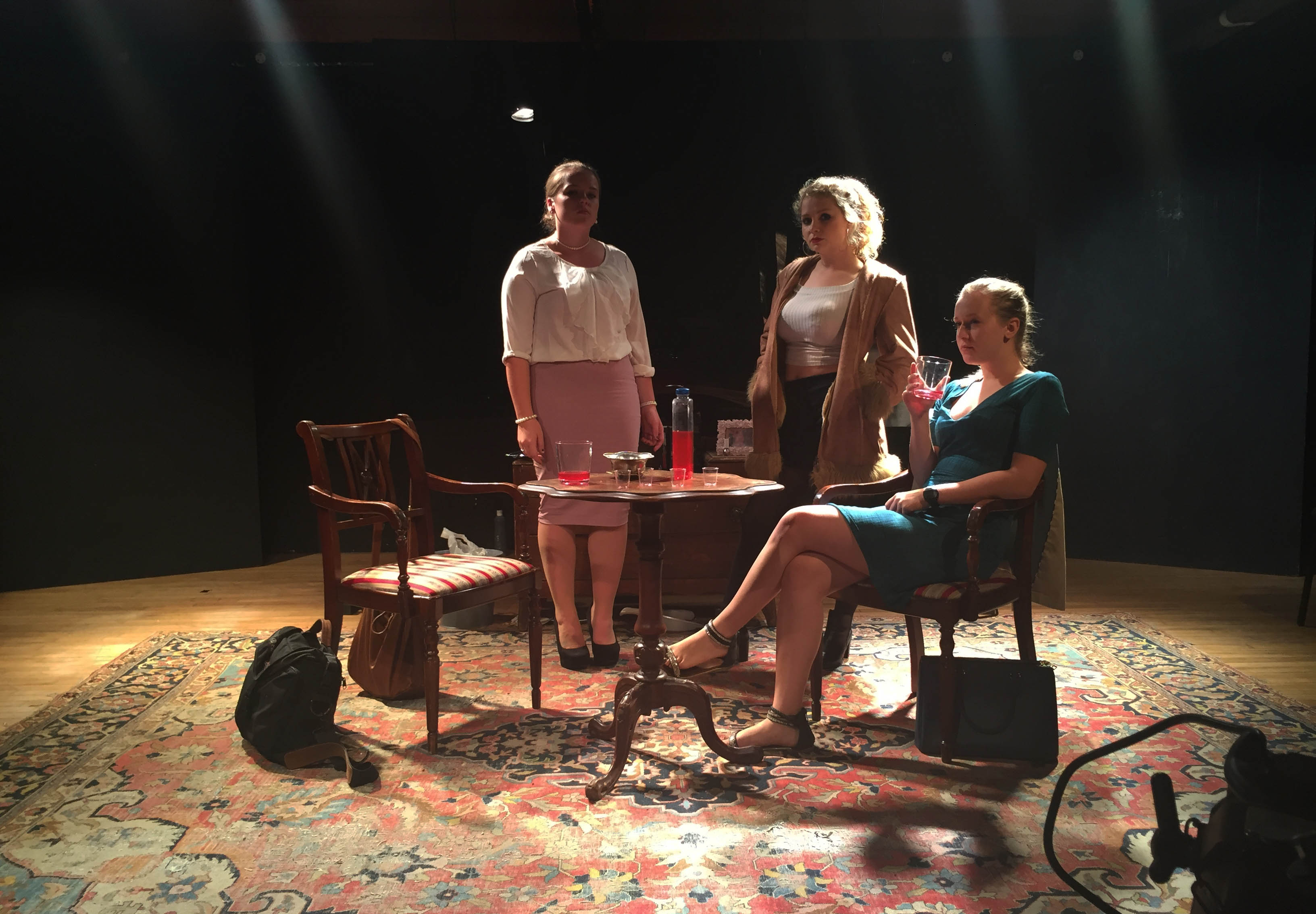 Abi Morgan’s Splendour is a chilling tale of violence and oppression in a country on the brink of revolution. Set in the opulent home of an unnamed dictator and his wife, the play follows four women as they await the absent dictator for his portrait sitting; the same scenes are repeated over and over from different perspectives as each character reveals her true feelings to the audience alone.

Director Mischa Cornelia Andreski has chosen to start with the photographer, her interpreter and their hostess waiting onstage as the audience enters the Burton Taylor, an effective opening that introduces the diverse personalities in the group. The play then begins as Genevieve, an old friend of the dictator’s wife, bursts into the house dripping with rain.

War-photographer Kathryn bears witness to the unfolding events as she waits to take the picture of a man who never appears, using a photographer’s eye for detail to give vivid descriptions both of the scene before us and of the violent events taking place across the country. Natalie Woodward gives a subtle and convincing performance, and handles the switch between dialogue and soliloquy with skill.

A commanding presence throughout as the dictator’s wife Micheleine, Rosie Richards perfectly executes the imperious tone and haughty manner befitting a woman who clings to the illusion of an ideal world as it crumbles around her. On occasion a little too overpowering in such a small venue, Richards nevertheless gives a solid performance and is particularly impressive during her monologues.

As widow and ‘wallflower’ Genevieve, Martina Kavanová’s performance evolves into a riveting and complex display of emotion. Fleeting expressions betray a suppressed hatred that finally erupts in an impassioned outburst: Kavanová is triumphant and menacing as Genevieve finally confronts her ‘friend’ about the terrible events of the past.

Kavanová’s impressive versatility is matched only by that of Ellie Mae MacDonald, who plays Kathryn’s incompetent interpreter Gilma. An unashamed pilferer who frequently offers some decidedly ‘creative’ translations, Gilma’s brash exterior conceals a devious and manipulative character with a mysterious past. The relationship with her client gives rise to some memorable moments; MacDonald and Woodward complement each other well as they deliver scenes ranging from hilarious to heart-rending.

While the set lacks the grandeur called for by the script with a few incongruous props, it is clear that a lot of thought has gone into designing costumes that perfectly match the characters to the last detail. The somewhat awkward execution of scene changes does have an impact on the carefully constructed pacing of Morgan’s script and a hesitant lighting design adds further confusion at times. Still, despite a few apparent technical issues, the opening performance contained some strong moments, with the use of background music at various points proving especially effective. It is not until the final scene, however, that we see the true potential of this production: with the mirror as a backdrop to the rising tension, we see sound, light and direction come together at last to present a stunning and enduring image of the horror of war.